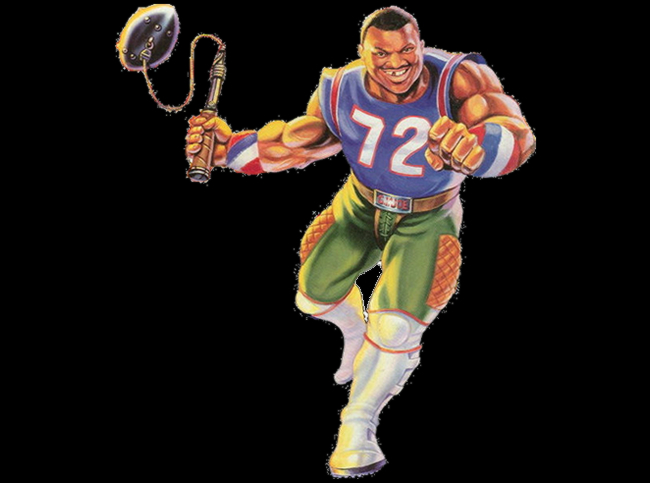 Everyone knows what a refrigerator is, right? It’s that big heavy box in the kitchen that you put all of your food into. Well, nothing says military specialist trainer like “a big box full of food,” right? Today, we’re going to examine that time William “The Refrigerator” Perry got his very own G.I. Joe action figure! 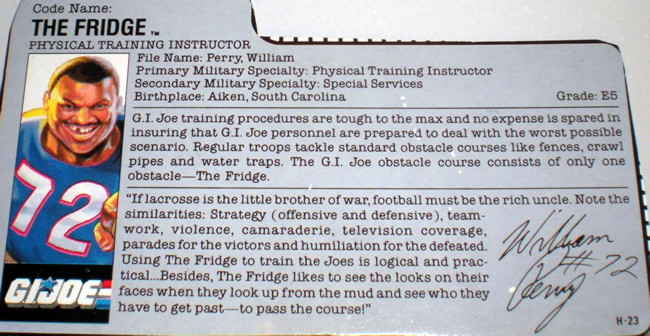 I feel like one of the weird themes of G.I. Joe is that they always seem to be lazy and out of shape, and they need Flint to hire someone special to train them. In “Arise Serpentor, Arise,” which we covered a few days ago, that guy was Sergeant Slaughter. As we also covered last week, it was very nearly Rocky Balboa at one point too. I feel like that really says something about the organization as a whole. Why does this elite troop of special forces dudes always need to get whipped into shape? Shouldn’t they be all disciplined and what not? Shouldn’t they be in fucking shape and ready to go? Are these really the men we want guarding our most important shit, and protecting us from Cobra? Let’s get it together, guys!

Anyway, in the 1980s, William “The Refrigerator” Perry was a Defensive Tackle for the Chicago Bears. He was beloved around the league for his hilarious nickname, which was inspired by his tremendous girth. You see Perry was listed at 6’2″ and 335 lbs. While I tend to think this is a complete understatement, you also have to understand that 300 lbs were a rarity in the NFL when Perry broke into the league in 1985. According to Football-Reference, the average DT in ’85 was 6’3″, but 266 lbs. On paper, Perry had them outweighed by 70 lbs. He also didn’t carry his 335 like guys do these days, his weight was all in his belly and butt. Sure, he was fast for a man his size, but there simply weren’t many men his size in the league.

Because of his size, and the fact that coach Mike Ditka would often play him at Fullback (including letting the big man run for a TD in the Super Bowl), Perry became an overnight sensation. After the Rocky Balboa thing fell through, the Joes needed another celebrity trainer to get them going. Always looking to capitalize on whatever current hot trend was going on, Hasbro got together with “The Fridge,” who had also appeared in a Battle Royal at Wrestlemania II not too long before that, and struck a deal. They revealed the Joes’ new trainer, and exciting mail-order only figure, in a new commercial:

I’m sure you will notice something from the commercial, and the photo at the top of this post. How do I put this nicely? Does Perry’s action figure look like it’s closer to 335 lbs… or 235 lbs? I’m not saying Hasbro lied, but the refrigerator looks more like a dish washer than a fridge, no? The action figure has some nicely defined biceps, triceps and all the other ceps too. He’s got a pretty tight looking chest and stomach, and muscularly defined legs. Again… I’m not saying Hasbro lied, but… maybe we should look at a side-by-side comparison, before I start accusing Hasbro of deceiving children across America by pretending Perry wasn’t named “The Fridge” because of his big fat ass. Let’s take a look. 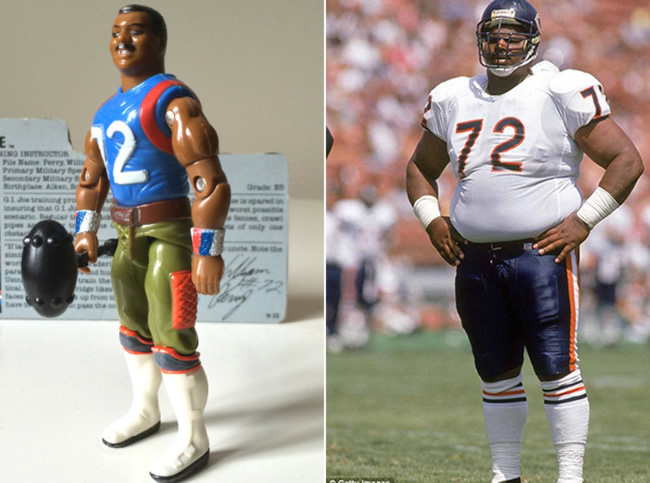 Um… Are you serious, Hasbro? To be fair, the photo of Perry on the right was taken in 1991 and not in 1986, but spoiler alert… it’s not that far away from what he looked like back then. The Perry on the left looks like he could train a hundred G.I. Joes. The Perry on the right looks like he could eat a hundred sloppy joes. At least the face is a pretty good likeness. I have to give Hasbro that much. Aside from being a gross misrepresentation of William Perry’s actual body type, the action figure concept wasn’t even that great. Like I said, would you pay the guy on the right in the photo above to train anyone? I might pay him to join Weight Watchers, but that’s about it. Also, his file card says the following:

Is that because they hired the fridge, who couldn’t climb a fence or fit inside a crawl pipe, and would probably just drink all the water in the water trap? C’mon man. The Fridge wasn’t gonna do all that. How exactly did he train them? Was his workout program called, “stand in front of the buffet line at the all-you-can-eat buffet when Perry comes down for dinner?” Is that the real story of how Snake Eyes got disfigured so badly that he had to have plastic surgery and wear a mask all the time? Did no one tell him not to eat the last bit of potatoes au gratin? He’s lucky he’s not dead!

Furthermore, what the fuck did Hasbro think giving “The Fridge” a football on a chain was going to do, other than get him killed in battle? Seriously. Have you ever seen Cobra’s arsenal of weaponry? They have tanks, guns, planes more, and everything they have shoot lasers. Perry, meanwhile, has basically a medieval mace, but the cool spiky metal ball has been replaced with a cumbersome non-spiky football. First of all, that thing has to weigh like 50 lbs if its made of iron. In the shape he’s in, he’s getting maybe one good swing with that before he’s gotta sit down to catch his breath. Even if he was able to swing it multiple times without having a heart attack, what’s the range of that weapon, like four feet? If you sent Perry to war with only that stupid thing to use for protection, I’m pretty sure he’d be dead before he jumped off the helicopter. He can’t possibly get close enough to actually take anyone out, and if he throws it at people, he’s never getting it back. What was G.I. Joe thinking? Give that man a gun! Also, how about a football helmet? Not only would that have been appropriate because he was a football player, but it also would have protected his brain from bullets and laser beams. Perry could not be more susceptible to attack than he is. Ridiculous.

As much as I loved William Perry growing up, this action figure is absolutely terrible. Hasbro gets an F, but at least we get a fun story. To show you that I’m not too angry, I’ll leave you with this lasting memory of Perry, who not only could play football, wrestle and train G.I. Joes, but was also a hell of a damn rapper. We love you Fridge!