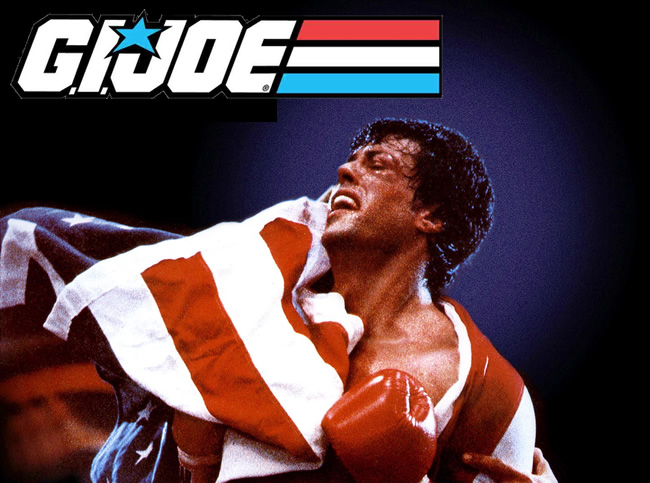 Right now, Creed is smashing up the box office, so I figured you guys were ripe and ready for some good Rocky trivia. Also, since this has unofficially been G.I. Joe week at Jobu’s Rum, it’s especially fitting that today’s bit of trivia about our favorite boxing hero also involves our favorite 1980s “daring, highly trained special mission force.” That’s right. Rocky Balboa once almost joined G.I. Joe, and I have all the details for you!

OK so we all know Rocky single-handedly ended the Cold War when he beat up Ivan “Death From Above” Drago for free in front of an extremely hostile Moscow crowd (well, they were for a while anyway) in 1985. Hasbro saw the “Italian Stallion’s” triumph and the potential dollar signs, and began working with Sylvester Stallone to bring the two brands together. The match seemed natural enough, Rocky was a super successful franchise that easily lent itself to a line of action figures, and G.I. Joe needed it’s next crossover Sergeant Slaughter-type star.

The two sides enjoyed very fruitful negotiations, and soon seemed to have a deal made. Things got so close to being official, in fact, that Hasbro jumped the gun and announced it in the second issue of G.I. Joe: Order of the Battle in 1986. Order of the Battle was basically the G.I. Joe equivalent of a sports team media guide, with character art and descriptions of various G.I. Joe characters by comic book artists Larry Hama and Herb Trimpe. Don’t believe me that Rocky was in there? Peep the evidence! 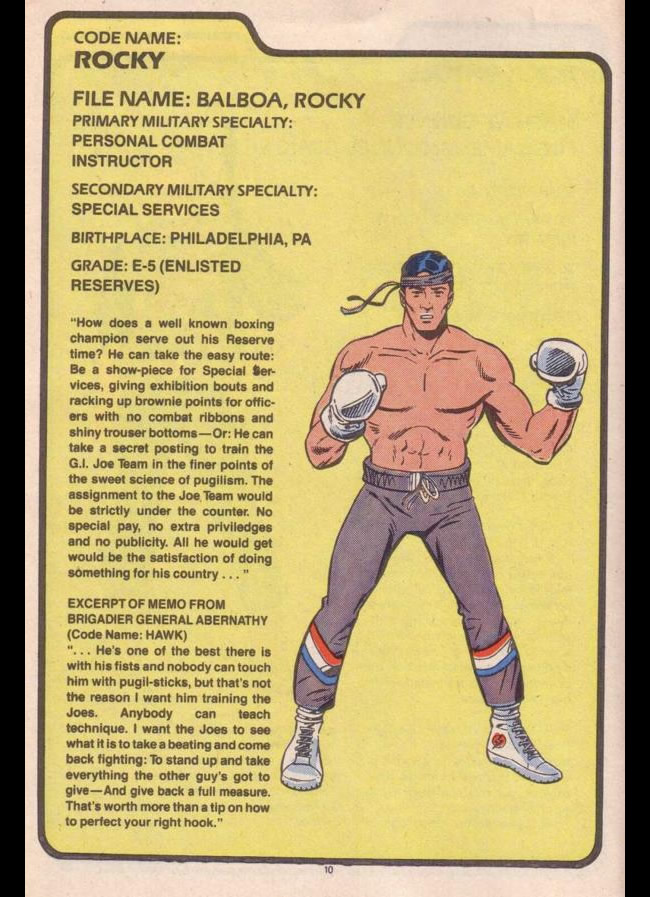 I know what you’re thinking… that doesn’t look like Rocky Balboa! Well, that should have been the first sign that this deal wasn’t official yet, and that maybe Hasbro probably shouldn’t have published the photo. Unfortunately, they just got too god damn excited, and they went ahead with this bonehead move. This is a bungle the likes of which Cobra Commander would have made, right? Was he secretly running Hasbro?

Well, whatever the Hasbro management hierarchy situation was, there would soon be egg all over everyone’s faces. You see, Stallone had another movie out around this time, with another easily action figurable character. We all remember Rambo from the First Blood franchise of fine films, right? Well, I guess Stallone figured he already had an army-related character, why would Rocky Balboa join G.I. Joe? He’s a boxer, not a soldier!

So, would Rambo be joining G.I. Joe instead? Unfortunately, that wasn’t in the cards either. Personally, I don’t think it would have worked anyway. By the time Rocky IV rolled around, Rocky had morphed from a gritty Philadelphia underdog into a champion of American pride. His American sensibilities had even earned him cheers from a communist crowd. Rambo, meanwhile, was a much darker figure. Rocky’s goal was to vanquish evil. Rambo’s goal was to kill every motherfucker who got in his way, while trying his best to ignore the demons he hid deep inside. Not exactly “Yo Joe” material, right?

Stallone ended up cutting a deal with Coleco to bring Rambo action figures to the market. I don’t remember ever begging my mom for the Rambo toys, so I’m not sure Stallone made the right choice, but then again, I don’t know what Coleco paid him for the deal. Maybe he would have done OK either way. On their end, Hasbro ended up printing a pretty staunch retraction in the next issue of the Order of Battle. Our bad, fans! JK! Don’t sue us, Rock! 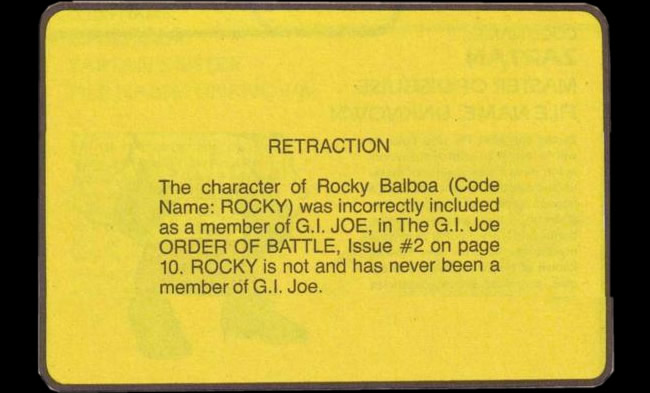 Well, that was the end of that saga, right? Wrong. Like with any torrid love affair, sometimes there’s some residuals left behind. You see, Hasbro and Stallone got so down and dirty together during negotiations, that a love child was born of their indiscretions. That love child was none other than Big Boa.

Did you ever wonder why Cobra employed a helmeted boxer in their ranks? No, one of their dastardly plots didn’t involve infiltrating the heavyweight title picture and using the glory and the championships to woo new followers into their ranks. This lunkhead you see below was actually designed and created to be Rocky’s main rival for the eventual star-studded pairing of the two money-making franchises. When the deal fell through, Hasbro could have scrapped the whole thing, but they’d already put so much time and energy into the villain, that they rolled him out anyway. 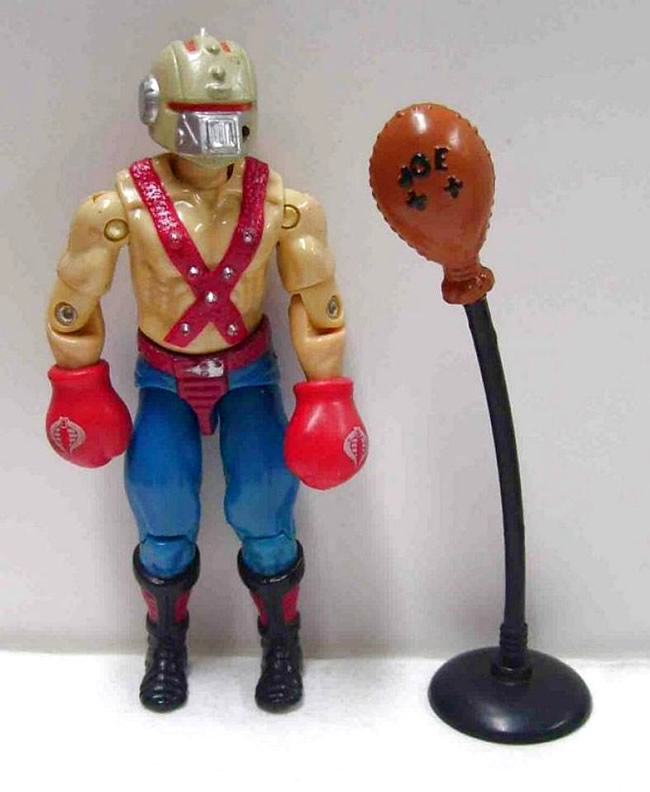 I mean, he’s bad ass enough to stand on his own, I guess. Look at his cool punching bag! It says “Joe” on it. That’s how much he hates G.I. Joe! He has to express his hatred 24/7, with punches! Side question: How much do you think it cost Cobra to have that bag custom made? That’s committment to the brand, right? Maybe they got a deal with the purchase of the Cobra-branded gloves Big Boa is also sporting. Also, as El Bolso asked me when he read a proof of this article, why was he in Daft Punk? Are Daft Punk secret Cobra operatives?? All that aside, Hasbro did a good job of rebranding Big Boa (that name sounds a lot like Balboa, doesn’t it?) as a “brutal, unfeeling task-master” who was there to whip the Cobra troops into shape, so at least they got that out of the deal.

Anyway, Big Boa is all that’s left of the proposed Rocky Balboa/G.I. Joe deal. He ended up being used fairly often in the comics, at least until his death in 2004. Yep… they finally killed him off. Maybe they should have done that before his action figure was even released, but then we wouldn’t have this fun story, right? Also, don’t worry fans, Rocky eventually got his own action figures too, just not with G.I. Joe, or even Hasbro.

Ok Joe fans, now you know. And knowing is half the battle!

UPDATE (12/4/15, 3:15PM): I was doing some research for a different post about another celebrity G.I. Joe pairing that is coming soon, when I stumbled upon a photo of the G.I. Joe action figure prototype for Rocky. You can see it below!