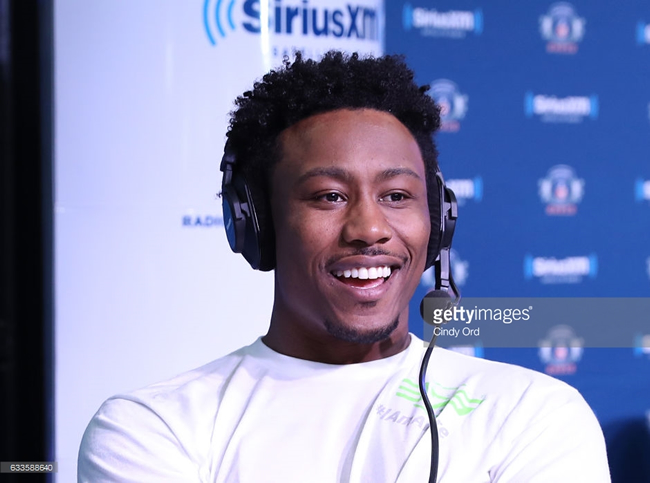 It’s that time of the year again, as NFL free agency has kicked off! Already, we’ve seen some sensible moves, like Alshon Jeffrey to the Eagles, and some head scratchers, like the Bears giving Mike Glennon $48 million or the Browns trading for Brock Osweiler and somehow also getting a 2nd round pick. The Giants got their free agency underway on day 1, agreeing to terms with two new players. Let’s get to know them, and see how they fit into the team for the 2017 season.

Every once in a while, I throw out a crazy move that I want the Giants to make in the offseason. Usually, like when they didn’t sign DeSean Jackson back in 2014, they don’t do my evil bidding. This year, they finally listened to me, bringing in former Jet, Bear, Dolphin and Bronco Brandon Marshall on a two-year deal. I love this signing more than Oprah loves bread. Ever since Plaxico Burress went to jail, I’ve been dreaming of a tall wide receiver for Eli Manning to throw the ball to. Since, 2008, the Giants have had four Wide Receivers over six feet tall: Derek Hagan (6’1″), Rueben Randle (6’2″), Domenik Hixon (6’2″) and Ramses Barden (6’6″). Now, most of those guys aren’t that tall, and the one tall guy never really did anything of importance in the NFL.

Now, there’s nothing wrong with short receivers. I happen to think Odell Beckham, Jr. is the best receiver in the league, so I don’t really care that he’s only 5’11”. In fact, teams don’t need tall wide receivers to be successful. However, it certainly helped Eli to have Burress on his Super Bowl winning drive back in 2008. It’s nice, in a pinch, to be able to throw it to a guy who towers over the DBs. Makes things a lot easier for a red zone QB. At the very least, it’s something that opposing defenses have to worry about.

At 6’4″, Marshall fits the Plaxico mold perfectly. Yes, he’s a little older than the average receiver (he turns 33 in a couple of weeks), but he’s also not going to be asked to be a number 1 receiver for the Giants. The clear number 1 in NY is OBJ. In my opinion, Sterling Shepard did enough last year, and clearly has the talent, to be the number 2 option for Eli. What the Giants need is a possession guy. A big-bodied guy that not only can go up and get high passes, but can also hang tough to make catches in the middle of the field.

Marshall may have had an off-year last year, but I’m pretty sure the Jets went through so many mediocre QBs last season that Glenn Foley was calling GM Mike Maccagnan to see if there was an opening. Two years ago, Marshall caught 109 passes, for 1,502 yards and a league-leading 14 TDs. If Marshall can stay healthy–something he’s been pretty good at over his career–and be around to catch 60 passes or so, I think Manning and the Giants pass game will kill it next year.

The Giants also picked up a fullback via free agency, adding former Viking Fullback/Tight End Rhett Ellison on a four-year deal. This is the type of move that might fly under the radar a bit, but, in my opinion, will end up being huge for the Giants offense. Did you know that the Giants didn’t have a fullback last year? They signed Will Johnson to fill the role, but he hurt his neck in the preseason and never played a down. Nikita Whitlock tried to step in, but ended up hurting his foot. In the end, Coach McAdoo said “fuck it,” and played without one. Remember how shitty the running game was pre-Paul Perkins last year? I don’t think that was a coincidence.

If all goes well, we won’t hear Ellison’s name too often over his four years with Big Blue. He’s being brought in mostly for his blocking ability, and not so much for his running or pass catching skills. I’m sure he’ll catch a pass every once in a while, but mostly he’ll be protecting Perkins, while keeping tackle Ereck Flowers from getting Manning killed. Again, I like this move. The Giants offense will never rely heavily on a fullback, but it’s important to have one that can block. The fact that Ellison can catch passes here and there will be a total bonus.

Also, his dad, Riki Ellison, was the first New Zealender, and Maori, to ever play in the NFL, which is pretty cool. So get your “frankly, my dear,” jokes ready, cuz Rhett’s coming to New York!