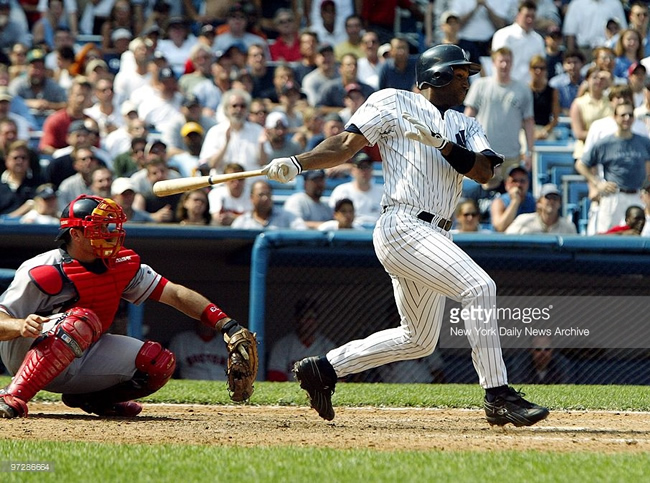 “Being deaf definitely makes me more motivated. I don’t want people to look at me differently because of my disability. People tend to look at deaf people differently and feel sorry for us. That motivates me. Even though I am disabled, I am able to accomplish a lot.”

It’s been a while since I’ve done a “Forgotten Yankees” post, so I figured I’d get back to it, especially since we’re kind of in the doldrums of the offseason right now. Today’s Forgotten Yankee only played four games in the Bronx, but he’s one of the most inspirational stories in the history of the sport, let alone the Yankees. Let’s take a look back at Curtis Pride‘s time on the squad.

Why is Pride’s story so inspirational? Because, when he debuted as an Expo back in September of 1993, he became the first deaf person to play Major League baseball since Dick Sipek in 1945. Pretty incredible.

Pride was probably always going to be a professional athlete–he starred in basketball and soccer as well, even representing the USMNT at the U-16 World Championship in China in 1985– but his big league journey began when he was drafted by the Mets out of the College of William and Mary in the 10th round of the 1986 draft. The Mets cut him loose in 1992, never bringing him above the AA level–an unceremonious departure if there ever was one.

According to the New York Times, the Mets told Pride he had no future with the club when the outfielder demanded to start the season at AAA. Pride felt shortchanged, but the Mets felt somewhat betrayed, considering they had gone out of their way to accommodate Pride’s desire to attend college full time and play basketball full time for W&M. This meant that he never reported to the Mets before May, and was always gone by September. That being said, Pride had the talent to go to AAA, and the Mets were in a notorious run of terrible teams, so why not promote him? After all, he was already 24 years old too.

Anyway, the Mets let him go, and he was picked up as a minor league free agent by the Expos. He caught fire in 1993, hitting .324/.394/.536 across two minor league levels, and earned his big league call up in September. On September 17, he got his first big league hit, a 2-run, game winning, double against the Phillies–against whom the Expos were battling for the division lead. He would go on to register 4 hits in 9 at bats that September, even socking his first career dinger off of the Marlins’ Richie Lewis on September 30.

Pride spent all of 1994, and most of 1995 in the minors for the Expos, and then became a minor league free agent. He was picked up by the Tigers prior to the 1996 season, and ended up having his best season as a big leaguer. In 95 games, he hit .300/.372/.513 and career highs in every pertinent offensive category, including home runs (10), RBI (31) and SB (11). Unfortunately, that would really be the peak of Pride’s big league career. Over the next six seasons, he bounced around from the Tigers to the Red Sox to the Braves to the independent leagues. He also spent some time back in the Mets and Dodgers’ minor leagues. He eventually went back to the Red Sox and even back to the Expos for a spell. He spent 2002 in the minors with the Pirates and, despite a big year, was not offered a contract by any major league organization following the season. He was devastated.

“That was a low point, not being able to get an offer after the good season I had last year. I had had five years at the major league level and I figured there’d be a team that would want to pick me up. I thought someone would need an experienced player. I was kind of frustrated, but I told myself to stay positive.”

In 2003, the Yankees plucked him out of the independent leagues and sent him to AAA Columbus, where, as a 34-year-old, he hit .314 in 25 games before the big leagues came calling again. Let’s set the scene, because this one played out almost like a movie scene. First of all, it was July 4th weekend–a very… prideful… time for the Yankees, and the United States. Secondly, the Yankees were playing the Red Sox in what was a very important series in the divisional battle. Thirdly, Pride did this in his first game as a Yankee on July 6:

Talk about a moment! For Pride, it was his first big league home run in two years, and he was allegedly moved to tears in the dugout after rounding the bases in front of the sold out crowd of 55,000. Sadly, it would be his first and only significant hit of a very brief Yankees career. He did hit a ground ball the next day that was bobbled and thrown away by Todd Walker, resulting in a walk-off win for the Yankees in the bottom of the 9th, but that was hardly his doing. Pride stuck around until July 12, but never got another hit, finishing his week-long run with just 1 hit in 12 at bats, before getting sent back down to AAA a few days after Bernie Williams and Raul Mondesi returned from injuries.

He finished out the season in AAA, never again making it to the bigs. The Yankees cut him loose at the end of the year, and Pride ended up playing parts of three seasons with the Angels, retiring for good at the age of 39 after again playing in the independents in 2008.

Yes, his run with the Yankees was all too brief, but his impact on the game went well beyond any box score. For that, we should always remember number 11 Curtis Pride. I’ll let George Michael’s (not that George Michael, RIP) Sports Machine tell you just a little bit more.