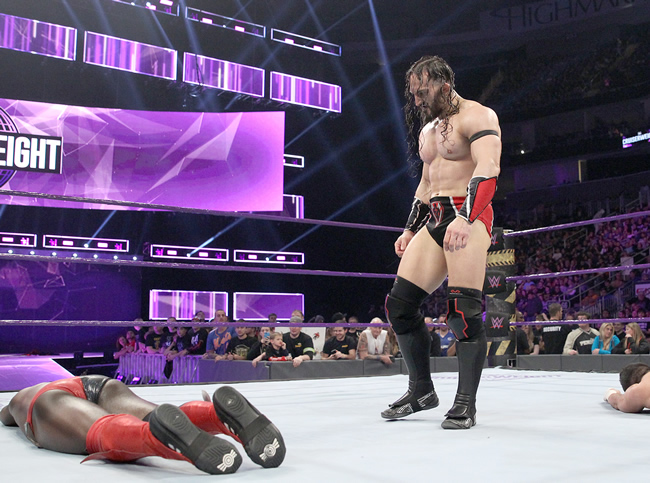 On Monday, September 19, WWE unveiled their Cruiserweight Division for the first time on Monday Night Raw. Prior to that, the company got the ball rolling on the cruiserweights by holding the critically acclaimed Cruiserweight Classic tournament starting in June on the WWE Network. For that tourney, they brought in 32 great wrestlers from all around the world–many of whom mainstream WWE audiences had never heard of, let alone seen work before–for a single-elimination tournament. The winner, former TNA, ROH and independent wrestler T.J. Perkins, was crowned champion and given the new purple belt.

After being unveiled on RAW, the division kind of floundered a bit. Perkins, for all his incredible wrestling ability, isn’t that compelling on the microphone, so the belt was shifted to returning WWE superstar The Brian Kendrick. Soon after that, it was shifted again, this time to the waist of fan favorite Rich Swann, where it still sits today. All of this has been fine, but the WWE has made several mistakes that have limited the ability for the division to make a real impact.

First of all, by announcing that The Cruiserweights were coming for a couple of months before they debuted, the company made them seem a bit like a sideshow. Secondly, the company has branded the division to the extreme, even switching out the ropes and arena branding and changing all the lighting around the buildings for the 20-minute segments during which the division appears on RAW. While I understand wanting the division, and its wrestlers, to stand out, going to such extremes, in my opinion, just served to alienate the division–again… a sideshow attraction.

Thirdly, the guys WWE picked for the division launch were almost all relative unknowns, at least to the WWE audience. The debut roster included Ariya Daivari (brother of former WWE superstar Shawn Daivari), Kendrick, Cedric Alexander, Drew Gulak, Gran Metalik, HoHo Lun, Jack Gallagher, Lince Dorado, Mustafa Ali, Noam Dar, Perkins, Tony Nese, Akira Tozawa and Gurv and Harv Sihra, who are collectively known as The Bollywood Boyz. Most WWE fans, who only watch WWE, probably recognize Kendrick, and no one else. Going into the CWC, I really only knew Kendrick and Cedric Alexander, and I was superficially familiar with Gulak as well, from some of the rumor sites I read. While I got to know these guys during the CWC, and I think most of them are terrific performers now, none of them were going to grab the greater WWE audience enough to jumpstart the division. No internet indy darlings are gonna make most WWE fans tune in to RAW every Monday.

I think WWE quickly realized that they’d made a mistake in their cruiserweight division presentation, because changes came rather quickly in the first couple of months of its existence. First, there were the multiple title changes, as the company tried to find who was clicking with the audience and who could carry the main feuds moving forward. The next big change was giving the division it’s own show, 205 Live, which airs on the WWE Network every Tuesday night after Smackdown Live goes off the air. It’s hard to get an entire division worth of wrestlers over with the audience when they’re getting 20 or 30 minutes once every week. With 205 Live, the cruiserweights get to supplement those 20 or 30 minutes with an entire dedicated hour every week. It really helps them develop their storylines, and has really gotten me excited about the division again.

The third thing they did, and are continuing to do, is to add star power to the division. The original 205 Live crew is very talented, but you need guys that fans want to see–guys with pedigree and name recognition. The first big addition to the roster was actually not an in-ring guy–at least he won’t be yet. Austin Aries joined Mauro Ranallo and Corey Graves at the announce table for the premiere episode. Aries is currently unable to wrestle because of a gnarly eye injury suffered at the hands of current NXT champion Shinsuke Nakamura at an NXT event, but he has, so far, made it clear that he’s coming after the title once he’s cleared to wrestle. Aries, known mostly to himself as “The Greatest Man That Ever Lived,” has that name recognition from his time in TNA, ROH and NXT, and the fact that he is declaring his intent to win that belt one day makes the title seem like a bigger deal.

The next name WWE introduced to the division is (finally) the one we’re actually here to talk about. Neville. Neville is, in my opinion, the single most important person on the 205 Live roster right now. First, the hard core fans love him from his time in NXT, where he was champion for 287 days (the second longest title reign for the fledgeling brand). It’s also clear from anyone who has seen him work, that he’s one of the more talented and agile wrestlers on the roster. Thirdly, he’s been seemingly held back during his time with WWE. He was saddled with a corny gimmick when he debuted on the main roster, broke his ankle and was buried when he returned several months later. This made his fans that much more eager to watch him get the push he deserves, and those fans have been loving his reincarnation as a heel on 205 Live and RAW.

Personally, I’ve never seen Neville work heel before, which is what he’s been doing since his return. To me, he’s always been the little guy working hard to make it to the top, crossing barriers along the way. His new character is very simple, and very heelish. He’s foreign (boo), he’s tired of American fans ignoring him (boooooo), and he’s going to win the belt to prove them all wrong, because he’s the self-proclaimed King of the Cruiserweights (booooo!). He even changed his appearance, growing a beard, greasing his hair and getting his angry man voice all tuned up, and so far it’s been great.

Neville’s return, and his great work as a heel against the favored Swann (with Kendrick and Perkins in the mix as well) has really taken the pressure off of the other guys in the division. In recent weeks, we’ve seen amazing work from Noam Dar in his current feud with Cedric Alexander (with Drew Gulak and Alicia Fox thrown in for fodder). “The Extraordinary Gentleman” Jack Gallagher has developed a nice little feud with Ariya Daivari too, as they fight to decide who is the biggest scoundrel of the two. The other undercard guys have continued to put on solid matches against each other, and the division is chugging right along. They’re even bringing back some other names from the past to entice fans to tune in, like former WWE and ECW superstar Tajiri (he was also part of the CWC this summer), who will re-debut on this coming week’s 205 Live. All of this is made possible because Neville is carrying the big title story now. The other guys don’t have to, so they can work on having more fun feuds and getting better at their respective crafts.

Is this division ever going to be the number one draw in the company? Probably not. However, there are now feuds that people care about. Fans will now tune in to 205 Live, which can only improve the status of the cruiserweights, and increase their star power.

It’s all thanks to the man from Newcastle upon Tyne–the next WWE Cruiserweight Champion, Neville.