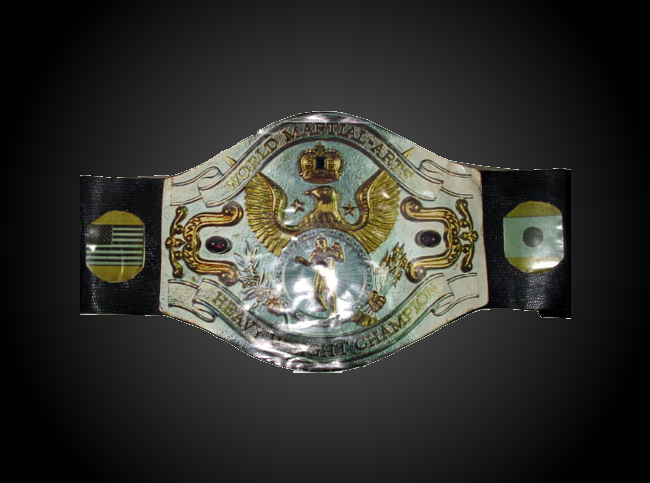 In the late 1970s, the then WWWF (World Wide Wrestling Federation), which was still owned by Vince McMahon Sr. at that point, decided to expand its horizons to the East, striking a talent share deal with Antonio Inoki’s promotion, New Japan Pro Wrestling. Not only did this agreement expose audiences from both countries to new foreign wrestlers, it also exposed everyone to some interesting new championship titles. Today, we’ll take a look at one of them–the WWF World Martial Arts Heavyweight Championship.

First of all, a little background about Inoki, a WWE Hall-of-Famer and a true legend of the business. Inoki first garnered some real international fame in 1976, when he wrestled/fought against Muhammad Ali for the NJPW Real World Martial Arts Championship, which is believed to have been created specifically for that bout. Sure, the match was terrible, but the publicity was real. Inoki continued wrestling/fighting those types of exhibitions for a while, for example his matches against guys like Andre the Giant and Willem Ruska, doing his part to “legitimize” the “sport” of professional wrestling while making a name for himself in the process. Nothing says “real” like martial arts, right?

Anyway, Inoki made his WWWF debut at Madison Square Garden on December 13, 1975, but it wasn’t until December 18, 1978–his next appearance at “the World’s Most Famous Arena”–that the company presented him with the WWWF World Martial Arts Heavyweight Championship. Why the belt? Well, the company needed to give Inoki some credibility, and a way to get the fans to root for him. You see, Japanese wrestlers were almost always bad guys by default in America because of tensions still around from WWII–I know, racism in America??–and a shiny new belt was the perfect way to endear Inoki with the fans and present him as a legitimate tough guy against WWWF competition.

Inoki defended the belt for the first time that very night against a masked wrestler named Texas Red (really veteran Red Bastien)–oddly enough in a straight professional wrestling rules match. Inoki would go on to hold the belt for many years–defending it sporadically on his way to a 3,780-day reign atop the “division.” Over the years, the pattern for defending the title was clear. Inoki would defend the title mostly in MMA-style exhibition bouts against famous martial arts athletes in Japan, and under professional wrestling matches against journeymen professional wrestlers when the belt was defended in the United States. Overall, Inoki only defended the belt a handful of times, so it doesn’t have much of a history.

In the mid-1980s, when Vince McMahon, Jr. took over the company and began focusing on national and global expansion, the deal between NJPW and WWF came to an end. The belt hung around a bit longer, however, becoming strictly NJPW property under a new name–NJPW World Martial Arts Championship.

On April 24, 1989, Inoki’s reign as champion finally came to an end, when he was bested in the fifth round of a classic fight by Shota Chochishvili. Chochishvili was a former Olympian Judo player who had won a gold medal in 1972 and Bronze in 1976 while representing the Soviet Union, but he wouldn’t be champion for long. A month later, Inoki won the belt back, and the championship was retired in December of that same year.

Overall, the list of champions is not a very thrilling one. Inoki held the belt for a combined 4,000 days during his two reigns, while Chochishvili held it for an unremarkable 31 days. That was all for the WWF World Martial Arts Heavyweight Championship.

One interesting note: in 1990, shortly after the Martial Arts Championship was decommissioned, the belt itself was reused under the banner of the Greatest 18 Championship–a belt that was created in honor of NJPW’s 30th anniversary. Unfortunately, that title was gone from the NJPW scene within only a couple of years too, and the original belt hasn’t been seen ever since.

That’s it for today, fans. I’d like to give a special thanks to the Pro Wrestling Historical Society, as most of my research came from them, and this pretty cool article about the history of the belt.

Anyway, as proof that I didn’t make this post up, enjoy a match for the belt from 1980 between Inoki and Larry Sharpe in Queens: