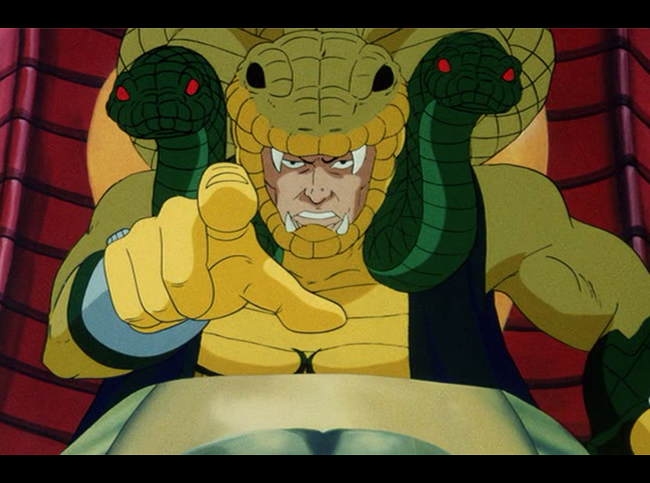 Sometimes the world revolves around more than just sports. Today, I want to talk about an issue of utmost importance. We simply must not go another day without paying homage one of history’s biggest badasses, and one of my favorite TV bad guys from my youth. Let’s take a look back at the complete badassery of Serpentor–the ultimate Cobra emperor. This, I command!

Just to clarify so that no one hates on my accuracy, I’m going to be talking about the version of Serpentor we first met in the G.I. Joe cartoon, with the origin story we all saw in the five-night television event called “Arise, Serpentor. Arise.” I never read the G.I. Joe comics when I was a kid, and I know Serpentor’s character trajectory is a little different in the comics, but we won’t be focusing on that at all. Everybody got that? Good!

OK. We can’t talk about Serpentor without discussing his ridiculous origin story. What basically happened was that Dr. Mindbender (Cobra’s chief interrogator and science officer) and Destro (an arms dealer and basically Cobra’s second in command), got tired of Cobra Commander‘s bungling ways. You see, Cobra Commander had always been one step away from finally beating G.I. Joe, but he would either get greedy, or make some horrendously stupid mistake, and the good guys always triumphed. In this particular case, Cobra attempted an invasion of G.I. Joe headquarters because the Joes were literally sitting around snipping at each other like teenage girls and were ripe for the picking, but Cobra Commander’s bad strategy, along with the fact that Sergeant Slaughter was clearly on steroids (more on that later), led to another humbling defeat for Cobra. In case you’re curious, here are some examples of Cobra Commander’s bumbling.

Mindbender and Destro decided that Cobra needed a new leader, and began to secretly plot to create one. How would they do this? Would they find a young Cobra soldier and train him, or genetically modify him like Captain America? Of course not. That wouldn’t be nearly dastardly enough! Instead, the two decided that they were going to collect DNA samples from evil military geniuses from all throughout history, and combine that DNA (using science and special machines with big bubbly test tubes) to create the ultimate Cobra emperor from scratch. Like a big evil bad guy stew! Yum! They tried to keep this plan secret from Cobra Commander, whom they feared would not approve of his two best guys creating a leader to take over for him, but CC finds out all about it through a bug in the secret meeting room where Destro and Mindbender were doing their plotting (the two also invited Tomax and Xamot and even some regular level Vipers to the meeting too, which was probably stupid anyway). Cobra Commander attempts to put the kibosh on the operation by having Mindbender and Destro arrested, but realizes quickly that the men of Cobra are more loyal to the co-conspirators than they are to him, so he pretends he’s all in and orders them to complete the mission (I totally want you guys to create a new leader to userp me!).

Over the next couple of weeks or so (that’s an approximation on my part), Cobra set out to capture DNA from such great leaders as Alexander the Great, Ivan the Terrible, Napoleon, Gengis Khan, Vlad Tempes (aka Dracula), Monteczuma, Rasputin, Geronimo, Julius Caesar, Hannibal, Attila the Hun, Eric the Red and even a made up Egyptian general named Xanuth Amon-Toth. Sure, the science was a bit iffy–how much DNA can you get from a thousands of years old skeleton? It’s not like their bones were preserved in amber–but the duo manage to really do well for themselves. Seriously, in the history of Cobra, I don’t think they have ever strategized or executed a plan better than they did this one. They beat the Joes at every step, collecting all of the DNA they needed basically with no problem. The one bungle they committed was probably creating a big parchment with their whole plan detailed on it, which of course ended up in the hands of G.I. Joe. This led to the Joes being there to attempt to stop Cobra at every turn, but like I said, Cobra managed to succeed every time, except for one.

When Mindbender leads a crew to China to collect the DNA of the great military strategist Sun Tzu, the Joes finally beat him to the punch, and Cobra fails to get the DNA. Mindbender is stopped by none other than Sergeant Slaughter who I think beat up like a hundred guys in this five episode miniseries. Seriously. At one point, he’s being attacked by like 15 cyborgs (the Cobra B.A.T.), and he crushes them all. He might as well have chewed their metal bones to pieces. Also, throughout all the fighting, Slaughter talks like he’s constantly enduring a coronary. Like he’s literally fighting his heart to keep it from exploding… probably from all the steroids. He should probably take a vacation at some point.

Anyway, Mindbender and Destro decided that, since they couldn’t get Sun Tzu’s DNA, they would instead kidnap Sergeant Slaughter and use his very DNA to power their new leader. Again, probably because they witnessed him all roided up and decimating all of their troops. Despite Cobra Commander calling their project “deader than disco (fucking zing!),” they somehow even succeed at this! I’m telling you. Cobra has never been more efficient than while Mindbender and Destro are leading them on this mission. They throw all their DNA into a big mixing pot and prepare to hit the switch, but Cobra Commander throws some unexplained pink pill into the mix at the last minute, ruining the experiment and creating a crazed blob of a monster, who proceeds to attack everyone. This showdown, of course, ends with Slaughter roiding up and pile driving the monster, which gets knocked out and then melts to nothing… Like ya do.

Slaughter is, once again, subdued, but is freed by Cobra Commander in the CC’s continued attempt to sabotage Mindbender and Destro. Slaughter manages to destroy the vial with his DNA, but the experiment goes off anyway. Serpentor arises, and we hear this:

What a badass entrance right? That’s the first thing he says? No one even gave him a script. That was off the top of the dome. Cobra Commander has never sounded this intimidating or intelligent in all of his years. Finally, Cobra was going to have a real leader! Nobody’s was gonna mess with this guy, right? Wrong. Sergeant Slaughter, who had been secretly freed by Cobra Commander, decided to fight Serpentor. As Serpentor was yelling about how no one should stand against him because he’s Serpentor, and this he commanded, Slaughter yelled out, “Command this, buddy!” And tried to roid up on the Cobra emperor. Unfortunately, there weren’t enough steroids in the world to help Slaughter, and he was quickly disposed of.

His treachery foiled again, Cobra Commander approached Serpentor, congratulated him on a job well done and proposed that Serpentor would be a great figurehead leader while Cobra Commander himself made all of the actual decisions. This goes over like a fart in church, and Serpentor yells “I am not symbolic! I am your emperor and master!” He then proceeds to hurl Cobra Commander across the room. Fuck you, Cobra Commander… and eat shit to boot. Learn your god damn place.

Eventually, the G.I. Joes came to rescue Slaughter, and they all escaped, but Serpentor’s plan was far from done. Instead of crying about it, or fumbling about, Serpentor regrouped and decided to invade Washington D.C. Guess what? Ge fucking succeeds! Cobra Commander couldn’t invade a Wendy’s in search for cheap fast food, and this new guy invaded one of the most important cities in the entire free world within a couple of days of being born. Are you serious, bro? Anyway, our new fearless leader offered this up as his victory speech:

“See how meekly all obey the commands of a true emperor? Resistence to the rule of Serpentor is no more! The city of Washington now enters a new era in history! The dawn of a thousand-year rule of Cobra. All will be crushed beneath Serpentor’s iron heel!”

Like any good conqueror, Serpentor demanded that the President of the United States himself show up to the Lincoln Memorial, where Serpentor had taken over and placed a giant yellow throne on old Abe’s lap. Imagine the gaul of this guy! When the President showed up and began to surrender, it turned out to be the Joes in disguise! The battle for DC was on! Unfortunately for Serpentor, he had used up all of Cobra’s gasoline and bullets in conquering DC, and so he and his troops were forced to retreat. Who doesn’t pump gas before leaving the house on a long trip? Come on, man! Ironically, it was the bumbling Cobra Commander that saved Serpentor’s bacon in the end, using a flame thrower to cut off the pursuing Joes as Cobra escaped in their last fully fueled airplane. Serpentor was about to ditch Cobra Commander and leave him to the Joes (thanks for nothing, buddy), but the fork-tongued Cobra leader (ex cobra leader?) convinced Serpentor to keep him around as a scapegoat for the failed invasion. That Cobra Commander! Always scheming.

I think we can stop here for now, because that’s pretty much where “Arise, Serpentor. Arise.” stops. We would come to know Serpentor more and more during Season 2 of the G.I. Joe cartoon, including the fact that those snakes around his neck could be infinitely removed and used as spears only to regenerate on their own, and that he could assume the facial features of those whose DNA were included in his genetic makeup, but that’s for another time. He never did stop commanding things either… very pushy! Next time someone tells you that Cobra never did anything, you tell them to shut their mouths, because Serpentor was the man. This, I command!!!

One thought on “Serpentor Was A Bad Ass”