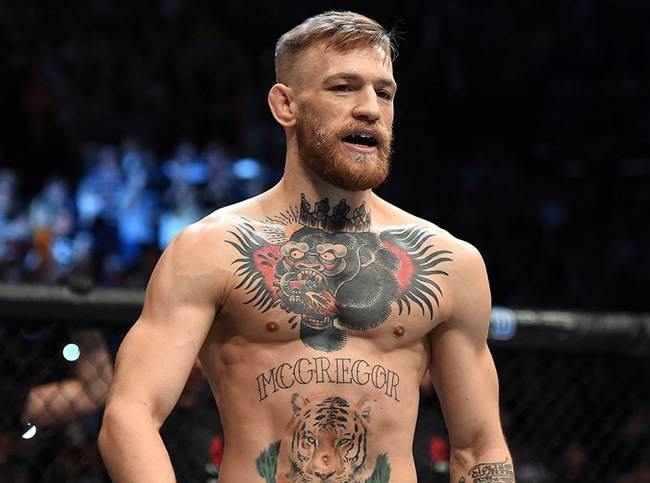 Everybody thinks they know sports – hell, I bet you think you’re an expert, don’t you?!?! – but how much do you really know?

At the NFL Combine, they give potential draft picks the Wonderlic to test their intelligence. Today, you are privileged to be able to take a Wonderlic of your own – a sports IQ test, if you will. Below is a test comprised of 10 questions to see how much you know about the current sports scene.

Good luck and who knows, if you do well enough, you may get drafted…..not sure where you would get drafted to…… but somewhere!

Hat tip to Bruce Mitchell of the PWTorch, from whom I blatantly stole this quiz gimmick.

(1) Earlier this year, after his scheduled opponent, lightweight champion Rafael Dos Anjos got injured and was replaced by Nate Diaz, the UFC’s top draw Connor McGregor proceeded to take his legendary trash talk to an unprecedented level, even saying he would jump up a weight class and destroy welterweight champion Robbie Lawler once he was done with Diaz. He followed this up by:
(A) Knocking Diaz out in the first round
(B) Winning a decisive decision
(C) Shockingly submitting Diaz
(D) Failing to make weight, being forced to fight at welterweight, and then getting choked out

(2) Ryan Fitzpatrick and the New York Jets have been at an impasse over a contract where Fitzpatrick believes he should be paid several million dollars more than he is being offered. Fitzpatrick is clearly right because:
(A) He’s been on four teams in four years
(B) He’s never played in a playoff game
(C) No other team has offered him a contract
(D) Oh, maybe he’s not right

(3) ESPN loudmouth Stephen A Smith openly threatened NBA star Kevin Durant on the air, yelling “You don’t want to make an enemy out of me!” after Durant denied a Smith report saying he had interest in going to the Lakers. ESPN punished this disgraceful act by:
(A) Suspending Smith
(B) Firing Smith
(C) Demoting Smith to an overnight slot
(D) Continuing to pay Smith $3 million per year

(4) Smith’s longtime TV co-host, Skip Bayless, who once smartly predicted Tim Tebow would have a more successful career than Andrew Luck and can’t make it through a five minute segment without blaming Lebron James for everything from world hunger to the JFK assassination, was punished for his daily stupidity by:
(A) Being fired by ESPN
(B) Being demoted to ESPN.com columnist
(C) Being sent home until his contract ran out
(D) Getting a huge multi-year deal from Fox Sports

(5) Jacoby Ellsbury is generally considered one of the worst signings in Yankees history. This is because:
(A) He has given the Yankees two and a half very underwhelming seasons
(B) He has four years and $82 million left on his contract
(C) Wait, are you f—-ing kidding me?
(D) Seriously, was he wearing a ski mask when he signed that deal?

(6) Roman Reigns, despite a mega push the likes of which hasn’t been seen in years, has been booed out of buildings and during his time on top, WWE house show attendance, TV ratings, and merchandise sales have dropped. This is because:
(A) You’re obviously a jaded internet fan
(B) Look, you just can’t be a good guy in this society anymore
(C) He’s got the look, I know what draws money, DAMNIT!
(D) Why don’t you just go back to your mom’s basement, ok?

(7) The Philadelphia Eagles gave Sam Bradford $22 million dollars in guaranteed money to be their starting Quarterback. The team then showed their commitment to him by:
(A) Giving $12 million guaranteed to QB Chase Daniel to lure him away from the Kansas City Chiefs
(B) Adding nobody of significance during free agency or the draft to help him on offense
(C) Using a stockpile of current and future draft picks to move up and select QB Carson Wentz from North Dakota State
(D) All of the above

(8) Yankees closer Aroldis Chapman was widely maligned as a woman beating psycho following a reported domestic violence incident last year. The heinous details of his brutality against females included:
(A) The woman in question who was his girlfriend, admitting she started an argument with him after seeing a text on his phone from another woman
(B) The woman in question changing her story multiple times
(C) No physical evidence of any marks or bruises on said woman
(D) A room full of witnesses who claimed they never saw anything resembling a physical assault
(E) No arrest being made and no charges being brought
(F) Come on, we all know he did it because he’s a rich, powerful, macho athlete who abused his position of privilege against an oppressed woman.

(9) The New York Daily News lambasted former New York Yankees outfielders Paul O’Neill and Johnny Damon, tying them to a supposed epidemic of homophobia, sexism, and racism prevalent in professional sports locker rooms. The Daily News’s justification for this tirade against O’Neill and Damon was:
(A) They showed up at the gay pride parade, spit on one of the floats, and beat up several gay people in attendance
(B) They both have numerous incidents of domestic violence on their records
(C) They were revealed to be members of the KKK who took part in the bombing of black churches
(D) They endorsed Donald Trump for President

(10) The Buffalo Bills drafted Clemson linebacker Shaq Lawson in the first round of the 2016 NFL Draft. Bills Coach Rex Ryan and GM Doug Whaley said concerns about Lawson’s shoulder, which caused several teams to remove him from their draft boards, were ridiculous and Lawson was perfectly fine. A few weeks later, which of the following happened:
(A) Lawson stood out at mini camp, wreaking so much havoc that even longtime veterans ohhhhed and ohhhhed
(B) Lawson began working daily with former Pro Bowl Buffalo linebacker Cornelius Bennett in an effort to become the best at his position
(C) Lawson immediately took charge of defensive huddles in camp, taking an immediate leadership role in the Bills’ defense
(D) Lawson had surgery on his shoulder and was announced as being out 4-6 months.