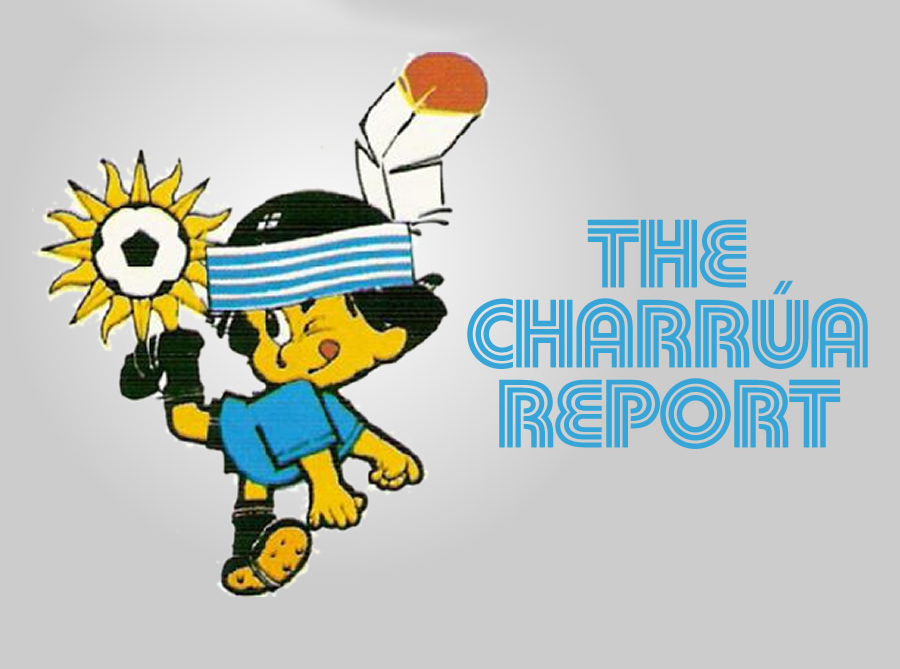 Well fans, another monthly round has come and gone. After a 3-0 win at home late last week against Venezuela, Uruguay finished this one off with one of the toughest games on its schedule, a visit to HEY-ALL! Actually, they traveled to Barranquilla to play host Colombia, but in World Cup Qualifying that’s as close to the eternal fires as you get as a visiting team. How did the Celestes do? Let’s get to it!

No Chance! No Chance in Hell!

Now, to be fair, Uruguay has gotten its share of positive results in Colombia (most recently a 1-0 win in 2008), but not in Barranquilla. The intense heat and humidity (and ridiculously loud fan support) of the coastal city has actually been much tougher on Uruguay’s national team than oxygen-light mountain strongholds like Bogotá. Here’s a recap of the match-ups in recent qualifiers. Note that before the 1998 WC qualifiers CONMEBOL split its tournament in groups, so before 1996 the last qualifier the teams played was in 1981.

When Uruguay travels to Barranquilla, they get trounced, whereas in Bogotá they have been much more successful (by the way, the 1981 qualifier was played there, and Uruguay came away with a 1-1 tie).

For this qualifying tournament, however, FIFA demanded that countries play all their qualifiers in the same stadium whenever possible, to put visiting teams on equal footing. It’s not great for larger countries because they don’t get to share the World Cup experience among several cities, but it makes sense in terms of competitive balance. Unfortunately, picked Barranquilla as their home base, which did not bode well for the Celestes. Still, this team has been exceeding expectations, so going into the game fans like El Bolso (and El Bolso’s uncle Pepe, one of La Celeste’s most irrationally positive fans) felt that this could be the game for Uruguay to do away with the Barranquilla curse.

Look, a woman is about to succeed an African-American as President of the United States, and they’re both demons. Plus a cut-rate circus clown with a 3 card Monte cardboard box operation managed to snag a major party nomination. So all bets are off. Anything can happen here, fans. To be clear: I didn’t think they would win, but I thought a tie was within reach.

Colombia dominated pretty much throughout the game, as was expected. The Celestes did their best to keep up while conserving energy. For most of the first half rain absolutely poured down, making it more difficult for both teams to play the ball on the ground, so there were lots of crosses into the box looking for a lucky header. In fact that is how Colombia opened the scoring in the 16th minute, as Abel Aguilar put his noggin on a corner kick from Luis Muriel and the ball sailed past Fernando Muslera. That was not the start Uruguay needed, but Colombia decided to slow things down now that they had the lead, and that allowed the Celestes to push forward, 27 minutes in, Carlos “the Duck” Sánchez sent another corner into the heart of the Colombian penalty box. A defender got his head on it but was only able to deflect it right into Cristian Rodríguez‘s path, and the midfielder headed it hard enough for it to sneak through the hands of the Colombian keeper. The teams went into halftime tied at 1, and the Celestes had to be feeling pretty good about that.

The second half was more of the same minus the rain, with the Cafeteros on the attack but Uruguay holding them off (Muslera’s steady hands were a huge part of that). Of course, the Celestes have Luis Suárez, THE BEST GOD DAMN PLAYER IN THE WHOLE WORLD, and you can only contain that kind of force of nature for so long. In the 73rd minute, Diego Godín sent a long ball into Colombian territory. Cristhian Stuani, who had replaced the Duck a few minutes earlier, jumped up and headed the ball back into the right side of the penalty box. TBGDPITWW made a run behind a Colombian defender who slipped on the wet grass and fell down. That left TBGDPITWW one-on-one with keeper David Ospina, but close enough to the touch line that there wasn’t much of an angle for a shot. This is what TBGDPITWW did. I mean what is poor Ospina supposed to do with that? Look at it again. Maybe TBGDPITWW is part demon, like Barry and the Hill-dog. Let’s get Alex Jones on the case.

Anyway, Uruguay had the lead with about 15 minutes to go and Celeste fans were thinking history, but it was not to be. Colombia pushed forward once again and, with 5 minutes to go, found the equalizer on yet another header this time by defender Yerry Mina (don’t even get me started on that name). El Bolso doesn’t usually link to other team’s goals, but look at this thing. It’s absolutely gorgeous. What can you do. The Celestes couldn’t pull off the miracle, but a tie in Barranquilla, against a direct rival like Colombia is a huge result. It’s the kind of result Trump would brag about having while in reality losing 6-0 to an over 65 YMCA rec league team.

If You Smell What Uruguay Is Cooking

We’re on the other side of the climb, fans: 10 games down, 8 to go. And while Uruguay finally gave up the top spot in the tournament (Brazil took that over with a 6 point weekend), they’re still right where they want to be. Here’s the table as of right now:

The Celestes have a 5 point cushion over the first elimination spot, and 4 points over Argentina, which would be playoff-bound if the tournament ended today. That’s not a surefire ticket to Russia 2018, but it’s a hell of a lot better than where the team has been historically. With 8 games still remaining (including 4 at home, where they have yet to even concede a goal), they are 7 points away from matching their best points total ever in World Cup Qualifying. That’s pretty damn good, and El Bolso is enjoying the team’s newfound efficacy.

The next round of games will be in November and they will be absolutely yooge: home against Ecuador, then a visit to Chile. The Celestes will be without Edinson Cavani for the first one (and Álvaro “Palito” Pereira, but who cares about him), but if they can come out of that week with a strong enough performance (say, another win at home and a tie in Santiago), it might just be time for Uruguay fans to start brushing up on their Russian. Nebesnyy, carajo!

Of course, El Bolso will be here to tell you all about it. Before I go, let’s take one more look at TBGDPITWW being TBGDPITWW:

One thought on “The Charrúa Report: Closer to Fine”