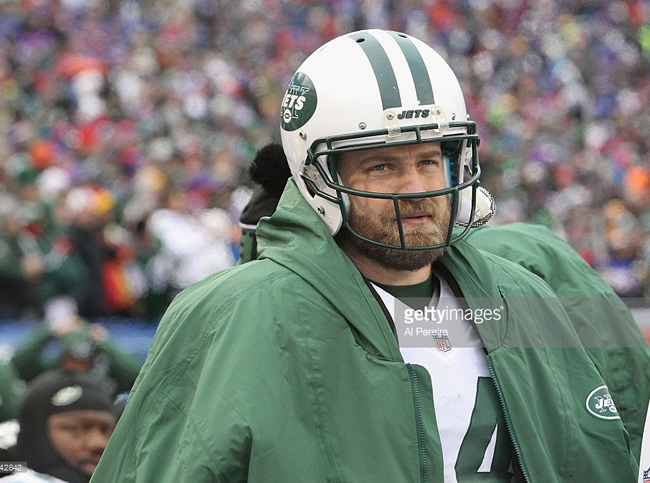 I have to admit, I have absolutely no idea what Ryan Fitzpatrick‘s end game is.

In case you have been living under a rock, the veteran quarterback has been at a stalemate with the Jets for months.

According to reports, the team is offering Fitzpatrick somewhere in the neighborhood of $7 million – $9 million per season, the going rate for a low-end starter or high-end back-up. Fitzpatrick and his agent, Jimmy Sexton, are asking for something nearly twice that, citing the lucrative $18 million given to Sam Bradford by the Eagles and to Brock Osweiler by the Texans.

Everybody has been expecting something to happen almost daily and yet, to this point, nothing has. The Jets flirted with veterans Robert Griffin III and Brian Hoyer before allowing them to sign elsewhere. Fitzpatrick has shopped his services all over the league and even threatened retirement.

And here we sit, in the exact same place we were when the season ended in January.

The Jets, despite drafting potential quarterback of the future Christian Hackenberg in the second round of this year’s NFL draft, have made it clear their #1 priority is still to bring back the man who stood behind center for them last season. Fitzpatrick, despite previously hinting at retirement, has now dropped that talk and insists he wants to play next season.

Yet on it goes: A multi-million dollar game of chicken with neither side seemingly willing to blink.

At the heart of the issue is a question of value and on that central premise, it appears the Jets are right.

Why are the Jets right? Because despite what Bernie Sanders would like you to believe, your value isn’t determined by what you would like it to be. Businesses have budgets and expenses and the market dictates what you are worth not just to your employer, but to all other employers in your field.

In other words, the Jets have a budget, in this case, the salary cap limit of roughly $155 million. Anything they pay Fitzpatrick is deducted from that number and cannot be allocated elsewhere. Tying up major money on Fitzpatrick could, theoretically, mean the difference between working out a long-term deal with a player like talented defensive lineman Sheldon Richardson, or being forced to watch him leave in free agency a few years from now.

The Jets have clearly decided he is not worth that kind of investment. And if we are being completely honest here, they are 100% right for two reasons.

The first is the simple and unavoidable truth that for all the talk of how great he was last season, Ryan Fitzpatrick isn’t that good.

Sure, he threw 31 touchdowns last season, breaking his own personal mark and the Jets’ single season record, but a closer look at the numbers tells the true tale. Among all starting quarterbacks last season, Fitzpatrick ranked 24th in QB rating, 27th in completion percentage, and 29th in yards per attempt. He was also 5th worst in the league in interceptions and, according to ESPN’s Ron Jaworski, who reviewed the 2015 game tapes of every starting quarterback, Fitzpatrick was second worst in the league in intercept-able passes, eclipsed only by the aforementioned Brian Hoyer.

The large number of intercept-able passes indicates a major chance for regression, considering the Jets had one of the league’s easiest schedules in 2015 but will have one of the hardest in 2016, meaning they will be facing much tougher defenses with much better secondaries.

The perception, probably because he graduated from Harvard, is that Fitzpatrick is a smart QB who manages the game and doesn’t make mistakes. But he isn’t. He’s a physically limited quarterback who can get hot at times, but far too often locks his eyes on receivers, makes poor throws, and puts the opposing team in an advantageous position by turning the ball over.

A look at his career stats, season by season, game by game, shows this to be true over and over again.

And that leads us to the second reason the Jets are right: the rest of the league agrees with them. There’s a reason Fitzpatrick has been on six teams in eleven seasons. There’s a reason nobody else has put in a bid for his services that has topped, or even matched what the Jets are offering. The league knows what Fitzpatrick is and it is a career journeyman and marginal starter with plenty of character but a truck-load of flaws.

Case closed. The market has spoken. You would think that Fitzpatrick, of all people, being a Harvard graduate, would be smart enough to realize this. The Jets are the only game in town and their offer is the best one he is going to get.

And as for his supporters who argue he was better than Bradford and Osweiler last season, so why should he have to settle for half of what they are getting? The answer is potential. Ryan Fitzpatrick is 33 years-old with a decade of game film in his rear-view mirror. At this point, he is what he is: a Band-Aid. Nothing more, nothing less.

Osweiler and Bradford got paid not for what they are, but for what talent evaluators believe they can be. Despite years of injuries and inconsistent play, teams still see Bradford as the uber talent they thought he was when the Rams made him the #1 pick in the draft in 2010 out of the University of Oklahoma.

Osweiler was largely unimpressive in the seven games he started last season, but he’s young, he’s a big guy with a big arm, and the Texans believe he has it in him to become a franchise quarterback.

However, even if you think the Eagles and Texans are wrong and that they overvalued their respective quarterbacks, why is that the Jets fault? Put another way, why should the Jets pay Fitzpatrick far more than they and the rest of the league think he is worth just because the Eagles and Texans made foolish deals?

All of that said, his leadership, rapport with teammates, knowledge of Offensive Coordinator Chan Gailey’s system, and quite frankly, lack of any great alternative still makes Fitzpatrick the best option the Jets have, which is why they have kept their offer to him open all this time.

But make no mistake: he will play for them at their price, or he won’t play.

Jets fans don’t want to hear this because his name is basically mud with them at this point, but the team does have another option on their roster: Geno Smith.

I’m well aware of Smith’s past struggles but keep in mind that he had far less to work with than Fitzpatrick did–no Brandon Marshall, a banged up Eric Decker and a secondary that couldn’t keep opposing offenses out of the end zone–and he was not operating in Gailey’s system, which he was reportedly learning rapidly before getting his jaw broken during training camp last year.

Plus if you set aside touchdown/INT numbers, which we established earlier were in large part due to luck, Smith’s overall numbers and rankings are not that far off from Fitzpatrick’s. I’m not even making the argument that Smith would be a great option, merely that he isn’t that much worse than Fitzpatrick. Turnonthejets.com‘s Joe Caporoso has said numerous times he believes Smith could give the Jets 85-90% of Fitzpatrick’s production and I’d say that’s a fair estimate.

Regardless, it is hard to see what Fitzpatrick is hoping to gain here. The Jets have made it very clear that they want him back but their offer will not be increased. No other teams have made any serious attempts to sign him, including Denver, who reportedly balked at his asking price and didn’t even think he was worth what the Jets were offering. He tried to use retirement as leverage, but has since said publicly he definitely wants to play next season.

He’s completely out of moves.

Teammate Eric Decker thinks Fitzpatrick will sign in July, but really, what does that accomplish? He misses some mini camps but still looks like a fool for holding out for months only to accept the same deal he supposedly felt was insulting.

The reality is, the Jets want Ryan Fitzpatrick back and they’ve said they are keeping the window open for him, but sooner or later that window is going to close. The Jets can’t wait forever and at some point, either Fitzpatrick will have to swallow his pride and give in or the Jets will be forced to move on without him.

That’s why if Fitzpatrick really does want to play next season as he claims, it is time for him to stop denying reality and admit he played a high-end game of Texas Hold ’em and lost.

The charade has gone on long enough.

Ryan Fitzpatrick needs to do what deep down, he has probably always known he would in the end: sign the contract the Jets are offering him and stop being the “dumbest f—ing smart guy” we know.

One thought on “Educated Fool: The Ballad of Ryan Fitzpatrick”