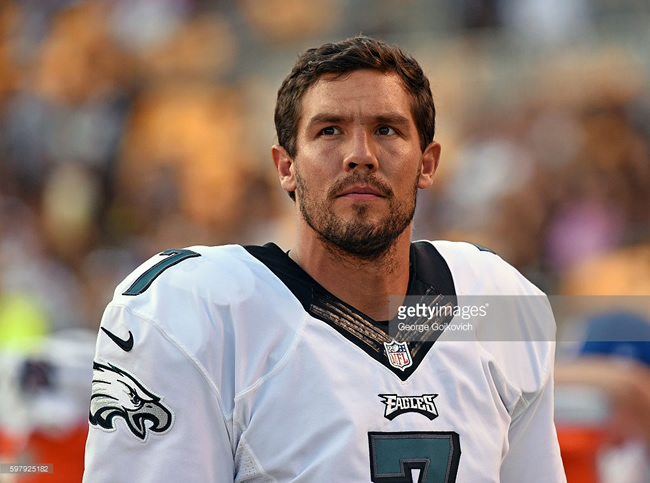 Panic is never your friend. Anytime a person engages in it, they are bound to make foolish moves that are at best nonsensical and at worst harmful.

On Saturday, we saw an example of the latter.

The seeds of what happened on Saturday began when Chip Kelly left the University of Oregon for the Philadelphia Eagles in 2013, boasting about bringing his innovative, quick strike offense to the NFL. That system, despite having its critics, produced mostly positive results early on, with the Eagles winning a division title in 2013 and finishing with double digit victories each of Kelly’s first two seasons.

But then Kelly’s own bravado got the best of him.

After a major power struggle between the former University of Oregon head coach and the Eagles’ then general manager Howie Roseman, Kelly was promoted and given final say on player personnel decisions while Roseman was demoted and basically told to pound sand.

It was then that things began to slide downhill and spiral out of control.

Kelly’s first draft class was underwhelming at best, headlined by the first round selection of Nelson Agholor, a modestly talented possession receiver out of USC whom many projected to be picked a round later.

Star running back LeSean McCoy was jettisoned to Buffalo for linebacker Kiko Alonso, a former rookie of the year who had missed the prior season due to a torn ACL (he also played for Kelly at Oregon). Big money was doled out for the previous year’s rushing leader, DeMarco Murray of the division rival Dallas Cowboys, and Byron Maxwell, who had been a starting corner on the reigning NFC champion Seattle Seahawks.

The biggest move, however, was the trade of incumbent starting quarterback Nick Foles to the St Louis Rams for their incumbent starter at the position, Sam Bradford.

Foles’ weaknesses had been exposed in 2014 and it was correctly determined he was not the answer in Philadelphia, but the turn to Bradford was an odd choice.

For starters, Bradford had played in only seven games the prior two seasons due to two ACL tears of the same knee. Furthermore, despite being a former Heisman Trophy winner and #1 overall pick out of the University of Oklahoma, when healthy as a pro, his results had been largely mediocre.

Still, Kelly believed that Bradford could competently command his offense, so the move was made. Overall, Bradford ended up playing fairly well in a handful of games, but he more or less lived up to the mediocre label his previous performances had earned him over the years, finishing with 19 touchdowns, 14 interceptions, and a 41.83 QBR, third worst among starting quarterbacks in 2015.

The Eagles themselves were such a mess as a whole in 2015, that Kelly was fired with one game left in the season, at which point the team sported a dismal 6-9 record.

Kelly’s dismissal put Howie Roseman back in power and he moved quickly to undo the mistakes of the 2015 off season.

Murray, who had been ineffective and eventually benched in favor of Ryan Mathews, was dealt to Tennessee for a mid-round pick. Maxwell and Alonso–neither of whom had played well for the Eagles–were packaged in a deal to Miami in a move that jumped the Eagles up a few spots in the first round of the 2016 draft. Even backup QB Mark Sanchez, a reclamation project of sorts for Kelly, was shipped out to Denver.

Strangely, though, the biggest Chip Kelly move of all was reinforced.

The Eagles re-signed Sam Bradford to a new two-year contract worth $36 million with a whopping $26 million of guaranteed money. The signing, which seemed to make no sense at the time, made even less sense after Philadelphia later gave $21 million over three years to former Kansas City backup QB Chase Daniel and traded a boatload of current and future picks to move up so that they could select North Dakota State QB Carson Wentz in the 2016 NFL draft in April.

The official line was that Bradford would be the starter, Daniel the backup, and Wentz would sit behind both and learn before eventually taking the reigns in a year or two. Bradford was upset, and reports surfaced that he was looking for a way out of Philadelphia. But Roseman and new coach Doug Pedersen stuck to their guns and Bradford eventually dropped his grievances–at least publicly–and began to get on with the task of preparing to be the Eagles’ 2016 starting quarterback.

Until an ACL injury–though ironically not one to Bradford himself this time–changed everything.

During practice last week, Teddy Bridgewater, the promising young starting QB of the Minnesota Vikings, ruptured his ACL during non-contact practice. Minnesota, fresh off a division title last season, looked around and saw only 36-year-old journeyman Shaun Hill ready to go behind center. The season was likely lost if they didn’t act quickly to rectify that fact, so they did the one thing we already established you should never do.

They say a woman can smell desperation on a man, and apparently, Howie Roseman has the ability to smell that same scent of despair on Vikings’ general manager Rick Spielman, who stunningly agreed to give up a 2017 first round draft pick and a 2018 fourth round draft pick to acquire Bradford from the Eagles.

Bradford undoubtedly represents an upgrade over Hill, but at what cost?

After the injury to Bridgewater, Spielman told reporters that no matter what, he would not make any moves that would harm the team’s future. But trading away two draft picks in this deal–one of which is a premium asset–seems to be the antithesis of that.

And exactly what does this move do for the Vikings, anyway?

Even if Bradford is better than what they had, he isn’t a difference maker. I realize pickings are slim at this point–with the best available target likely being the Jets’ Geno Smith, who is certainly nothing special–but is Bradford SO much better than him, or Hill for that matter, that it justifies a trade of this magnitude?

After all, Bradford has been riddled with injuries and–even when healthy–has shown his mediocrity over and over again, never producing a season with a winning record, while racking up a career completion percentage just north of 60% and a modest QB rating of 81.

Yet, somehow, teams keep believing and investing in him based solely on potential, turning the former Heisman trophy winner into football’s version of AJ Burnett.

The Vikings–like the Rams and Eagles before them–will eventually come to realize that, regardless of all the hype surrounding him, the truth is–to paraphrase a joke pwtorch.com’s Bruce Mitchell once made about pro wrestler Lex Luger–whatever it is that Sam Bradford never had, he still doesn’t have it.

As for Howie Roseman, he righted the wrong of the silly two-year contract he gave Bradford months ago and continued his excellent 2016 off season by recouping some of the draft picks he surrendered in the Carson Wentz deal. Roseman will now watch as his handpicked QB of the future becomes the QB of the present a little sooner than expected, knowing that if Wentz struggles, the capable Chase Daniel is there to step in and steady the ship.

Meanwhile, the rest of the NFL can now see plain as day that when it comes to Sam Bradford’s pro career, the words sung by Rod Tidwell‘s dad back in 1972 ring ever so true: everybody plays the fool, sometime.

For the Rams, that time was the day they drafted Bradford in 2011. For Chip Kelly, it was last year when he traded for Bradford. For Howie Roseman, it was a few months ago when he gave Bradford $26 million guaranteed.

And for Rick Spielman, his turn to play the fool was Saturday.

Even if he doesn’t know it yet.