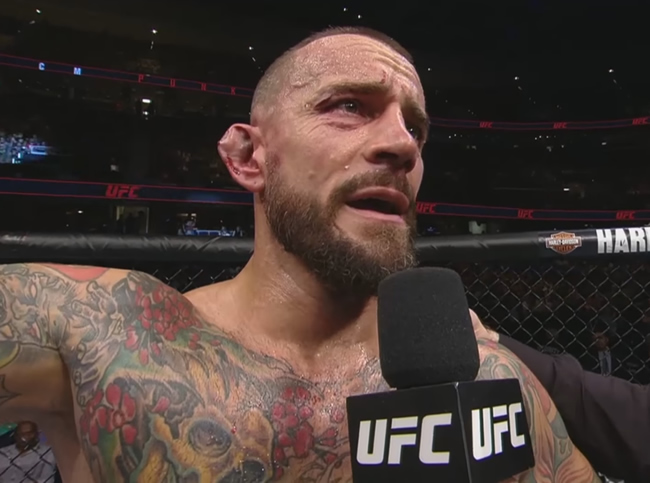 “Go ahead, laugh. But the fact is…..I’m here. Tomorrow you’ll know I wasn’t kidding and you’ll think I was crazy. But I figured it this way: better to be king for a night than schmuck for a lifetime!” – Robert Deniro as Rupert Pupkin in “The King of Comedy”

What happened at UFC 203 in Cleveland on Saturday night was pathetic.

Sure, there was Alistair Overeem getting knocked out by UFC heavyweight champion Stipe Miocic and then claiming to have tapped out the champ without the referee seeing it, only to be shown a fool by the replay footage, not once but twice.

And there was Fabricio Werdum, who followed up a dominant win against Travis Browne by throwing a kick at one of Browne’s corner men, damn near starting a brawl in the process.

On any other night, these things would have been more than enough to make the UFC look pretty bad.

But this wasn’t any other night.

You see, that is because Saturday night was the UFC debut of Phil “CM Punk” Brooks.

Nevermind that Punk had zero background in the sport and only started seriously training after signing with UFC in December 2014. Nevermind that Punk was so “impressive” in training camp that he had his debut pushed back more than once due to injury. And nevermind that above all else, Punk had never competed in athletics at any serious level, not even as a youth.

So this practical joke disguised as “just a man following his dreams” was foisted on the viewing public because it might add a few thousand buys to the show from casual fans who wanted to see the pro wrestling star in a real fight out of morbid curiosity.

And like any big scam, it had several layers.

For starters, there was UFC signing Punk in the first place, despite zero evidence that he could fight or even learn to fight. Fighters work their whole lives to make it to the UFC and many of those same fighters had to sit backstage and pretend to be supportive of a guy who was reportedly paid a whopping $500,000 for a professional fight despite the fact that – to use his trainer’s own words – the highest level he ever reached in training was occasionally tapping out a blue belt, the second lowest level you can achieve in Brazilian Jiu-Jitsu.

Speaking of Punk’s trainer, let’s talk about him for a second.

Duke Roufus was a world class kickboxer in his day and has become one of the best striking coaches in combat sports. He has been in and around fighting his whole life and knows the sport better than almost anybody. Unquestionably, Roufus would have known after watching Punk for 30 seconds that he was a lost cause, but took the former WWE champ in and agreed to train him, anyway.

Apparently, much like the thought that went into UFC’s decision to let Punk fight in the first place, Roufus decided that some exposure and quick cash was worth the potential damage to his reputation this whole fiasco might bring.

Still, Punk may have wanted to fight, UFC may have signed him to a contract, and Roufus may have agreed to train him, but surely, a guy with no professional fights – or even amateur fights, for that matter – fighting on the main card on PPV for the single biggest MMA promotion in the world would never be approved by the athletic commission in Ohio, right?

Showing once again what a scam regulatory agencies in general and athletic commissions in particular are, the fight was approved under an exception that had been created for Brock Lesnar. Except not only was Brock Lesnar a freak athlete and a former NCAA heavyweight wrestling champion, he at least had a professional win in a lower level MMA promotion before his UFC debut in 2008.

Even Stevie Wonder could see the difference here.

Ironically enough, that same exception that was used to get Punk in would not apply to any potential opponent, unless that person was also a professional wrestler (it is a shame nobody contacted Daniel Bryan – I hear he’s available). So UFC was going to have to put Punk in with a “real” opponent.

I’m not going to lie, when I first heard about Mickey Gall, a 24 year-old from New Jersey with two professional fights on his resume, I figured he had to be a cream puff.

A quick look at Mickey Gall’s resume shows he is no joke, with a fight background going back to his teens, three amateur wins and a brown belt in Brazilian Jiu-Jitsu – the second highest level you can reach – to his credit. He also had two professional wins, one of which was a 45 second victory by submission over Mike Jackson at a UFC Fight Night in February of this year.

I remember watching tape of Gall a few months ago and sending a friend the following text message: “Dude, this guy is legit. Unless this thing is fixed, he is going to kill Punk.”

There was no fix.

Punk was taken down, pounded and then submitted by rear naked choke in roughly two minutes Saturday night. Despite UFC, Roufus and Punk himself trying to con us all into believing he had somehow gone from – as Brock Lesnar once joked – beginner’s MMA classes at the YMCA to badass fighter in a year and a half, this was the result that anybody who isn’t a complete moron should have seen coming a mile away.

It was like watching an episode of Pros vs Joes live on PPV.

To his credit, UFC announcer Joe Rogan called this charade for what it was in the post fight, declaring that while he admired Punk’s bravery, this is what happens when you put a talented young fighter in against a celebrity looking to challenge himself.

The praising of Punk’s courage was commonplace after the fight, even among his detractors, but one very prominent voice in the MMA world wasn’t buying it.

Filling his usual post-UFC co-host slot on Wrestling Observer Radio with Dave Meltzer and Bryan Alvarez, UFC light heavyweight “Filthy” Tom Lawlor ripped everybody involved in this event, including the UFC, whom he accused of stooping to the level of a second rate company desperate for a cash grab, something he believes could do long lasting damage to UFC’s reputation, much like it did to the Japanese promotion Pride years ago when it engaged in promoting similar “freak show” fights.

He also blamed the athletic commission for sanctioning the fight, accusing them of more or less taking a legal bribe to skirt the traditional rules and invoke the Lesnar exception.

And Punk? Well, Lawlor wasn’t going to let him off the hook, not for one second.

Lawlor tore into Punk, scoffing at the idea that he was brave, saying that the former WWE star was paid a fortune and plenty of people would have done what he did – live out their dream for a hefty sum – if given the chance.

Of course, that chance only came Punk’s way because of his fame from wrestling, something he curiosly never wanted to talk about in the lead up to the fight. Yet, as Lawlor had pointed out in earlier interviews, that was ridiculous, because without his wrestling career, Punk had no more likelyhood of being signed by UFC than your next door neighbor.

And that brings us to the biggest joke of this whole disaster, CM Punk himself. This is a guy who relentlessly criticized Dwayne “The Rock” Johnson for being away from WWE for years and then walking back in and going straight to the main event of WrestleMania, taking away the spot of a full-time roster member.

Problem is, not only is Punk a hypocrite for doing the same exact thing, he’s worse, because the Rock was a pro wrestler for years and one of WWE’s biggest stars during its boom period. The Rock coming back to WWE was just one of the genre’s kings coming back after a really long absence, akin to Brock Lesnar returning to UFC this past July or Michael Jordan returning to basketball after a stint in double A baseball.

Nor is Punk fighting in UFC comparable to Lawrence Taylor headlining WrestleMania, since wrestling is show business, not legit sport. Plus Taylor was a world class athlete and as the end result showed, he could be led through a match by Bam Bam Bigelow well enough for one night to produce a decent fake fight. It is also different from the late Kimbo Slice fighting in UFC, since he at least had a street fighting background and several pro fights under his belt before ever making it to the sport’s #1 promotion.

No, what Punk did was more like David Arquette living out his childhood fantasy by being given the WCW title, though unlike Punk, at least the actor reportedly had the decency to donate his wrestling earnings to charity .

Speaking of Arquette, this all comes very close to a storyline his ex-wife, Courtney Cox, was involved in during an arc on “Friends,” where she dated a rich guy (Jon Favreau) who decided he wanted to be a UFC champion. He paid for the best training and the best equipment, but when it came time to get into the cage, he got beaten to a pulp.

This is because Favreau’s character, much like CM Punk, was not a real fighter, no matter how much he dreamed he was. And if we learned anything from Punk’s post fight promo, dreams are something that need to be followed and you should never give up, no matter what stands in your way.

Unfortunately for Punk, it looks like what stands in his way now is reality.

After the car crash that was the Punk fight Saturday – in a move likely done to help minimize damage to his company’s brand after the previously referenced morbid curiosity wears off – UFC President Dana White thankfully pulled the plug, saying that if Punk wants to fight again, “It probably shouldn’t be in UFC.”

So Punk is free to keep deluding himself into the idea that he’s actually a fighter – just as mother’s basement dweller Rupert Pupkin was able to convince himself he was a comedy star in “The King of Comedy” – but at least now, he can do it without the world’s biggest MMA company as his partner in the delusion.

As for Saturday night, perhaps Punk can move on and with time, put it behind him. Or, maybe he doesn’t want to, since he claimed in his post fight interview that getting a public beatdown from Mickey Gall was the “second greatest night” of his life, topped only by the night he married his wife.

I suppose that to Punk, the aforementioned Mr Pupkin was correct when explaining his reasoning for kidnapping comedy legend Jerry Langford to get an opportunity to be on television: better to be king for a night than schmuck for a lifetime.

Maybe in Punk’s mind he was the former on Saturday night. But in the minds of everybody else who watched?