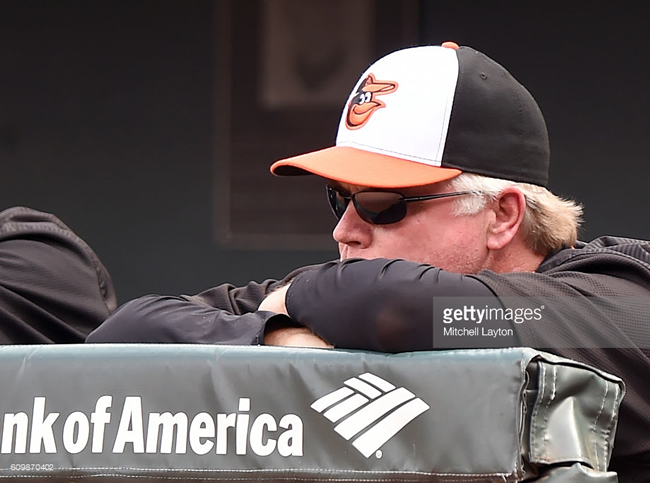 Brian Cashman announced at a press conference today that he does not expect to make any coaching changes this offseason. As a Yankees fan, and one who advocated for the firing of Joe Girardi long before it was cool–editors at a popular Yankees blog forbade me from posting this article after they lost to the Astros in last year’s Wild Card game, so I put in on my own blog–I was disappointed to hear it. However, other teams can and should make managerial changes. After the 11th inning debacle in Toronto during the AL Wild Card game last night, Buck Showalter seems to be everyone’s whipping boy right now. I can’t resist it. I have to join the bandwagon. Buck must go. Here’s why.

I don’t watch the Orioles every night, so I can’t speak to the minutia of daily mistakes Buck may or may not make in Baltimore like I can with Girardi, but Showalter made a giant boner that potentially cost the Orioles their playoff game against the Blue Jays last night. When you make big errors on the big stage, you should suffer big consequences.

Let me set the scene for you guys. As you know, the Wild Card game is a one game, winner take all, face off. The winner is showered with praise on their way to the ALDS. The loser gets taunted and booed until my throat is sore. When everything comes down to one game, win or go home, a manager has to pull out all the stops to make sure his team isn’t flying home the next day. It’s what good managers do to win ballgames, people!

Anyway, enough with the Simpsons references. This game was a tale of two Bucks, for me. In the bottom of the fifth, with the Orioles up 2-1, pitcher Chris Tillman got in some trouble. After Troy Tulowitzki flew out to start the inning, the Jays got back-to-back doubles from Michael Saunders and Kevin Pillar (Saunders only got to third on that) and an RBI single from Ezequiel Carrera to tie things up. Buck, realizing that he could not afford to let this game get out of hand, pulled Tillman from the game. The 28-year-old 16 game winner only had 74 pitches up to that point, but with everything on the line, Buck did the right thing by taking him out. It worked out well, as Mychal Givens (not to be confused with Michael Bivins of Bell Biv Devoe) got Devon Travis to ground into a double play to end the frame and keep the score tied.

From that point forward, Buck began doing the bullpen shuffle. Givens got him through the next inning too, and also got the first two outs of the seventh, before Donnie Hart came in to finish that frame. In the eighth, with the game still tied, Buck went to the very reliable Brad Brach, who went 1.1 innings of scoreless ball. Darren O’Day finished the 9th and handled the 10th easily as well. So far, nothing wrong with this, right?

Unfortunately for Buck and the Orioles, the Toronto pitching was mowing down the powerful Orioles lineup with equal ease, which meant we were still tied at the end of the 10th, when O’Day finished off his evening. Here’s where Buck shot himself, his team and the Baltimore fans directly in the foot. All the while, while he was parading out reliever after reliever, Zach Britton was sitting in the bullpen. Yes. the same Zach Britton who had a 0.54 ERA and 47 saves during the regular season. Yep. The same Zach Britton who didn’t blow any saves this year. The very same Zach Britton that some people are saying should get Cy Young Award votes this year as a closer, which is bananas.

Now let me ask you something. If you were trying to navigate your way through an elimination ballgame, and you saw that your opponents were guaranteed to have the top of the order bat in the bottom of an extra inning walk off type situation… would you continue the parade of also-rans out of your bullpen, or would you put in the best one-or-two-inning pitcher on your entire roster? Rather than go to Britton–whom Buck confirmed was available to pitch–Buck decided to start the inning with veteran journeyman Brian Duensing. Remarkably, Duensing struck out Carrera to start the inning, but now the big bats were coming up, so another change needed to be made.

Surely, Buck would go to Britton here, no? Pillar was due up, but the Jays lineup gets extremely scary immediately following him. Now would be a perfect time to bring in the best closer in baseball today, right? Get through the tough part of the lineup, maybe get one more inning out of him, and then figure out how to win the game and hopefully not have to make another pitching change. Right?

Predictably, the Jays jumped all over Jimenez. Travis blooped the third pitch Jimenez threw to left field for a single. Since perennial MVP candidate Josh Donaldson was up next, maybe now Buck would go to Britton?

Well, how about after Donaldson smacked Jimenez’s fourth pitch of the evening to left for a single to set up 1st and 3rd with one out? Surely, with the Jay’s most powerful hitter and best run producer coming up to the plate in Edwin Encarnacion, now Buck would definitely go to his closer. Right?? I mean, if anyone could get out of this jam, it was the guy who hasn’t blown a save since September of last year… Please?

Inexplicably, Buck stuck with Jimenez. It took Encarnacion just one pitch to end the Orioles’ season. Jimenez started him off with a fastball down the middle, and Encarnacion blasted it to moon. Bang! Zoom! Game over. In all, Jimenez threw five pitches. Two of them landed in the outfield for hits, another hasn’t landed yet.

Now, I like #BitterBuckFace more than anyone–seriously, nothing brings me more joy–but even I felt a little bad for the Orioles. Buck’s buffoonery cost them the season, and now they all have to go home because of him. Joe Girardi might pitch Dellin Betances every night for a week and kill him that way, but at least you know he’s gonna put in the guys that his binder tells him are the best pitchers for the situation. He’ll leave them in too long, but he’ll use them at least. Showalter ignored all logic in favor of the #ClosersHaveToClose theory. Basically, he was afraid of not having anyone to pitch the later innings if the Orioles continued to not score.

However, I ask you… is it worse to leave your best pitcher on the bench and lose now, or go with your best arm now to get out of a tough situation and figure out how to piece a potential 12th or 13th inning later on? In this case, Buck left his best bullet in the chamber, and because of that, the Orioles lost. Sure, you could argue that Britton might have failed anyway, considering it was 1st and 3rd with no out for a guy who hit 42 homers and drove in , but I’ll take my chances with the best closer in baseball today over a guy who wasn’t even good enough to be in the rotation anymore any day of the week.

Maybe Buck just isn’t a World Series championship caliber manager. Plus, I remember him being pretty good when ESPN hired him before his Orioles run. I think it’s time for everyone to move on… Some day, the Yankees will move on from Girardi too. They can teach classes on how NOT to manage a bullpen together. They could make some money with that.