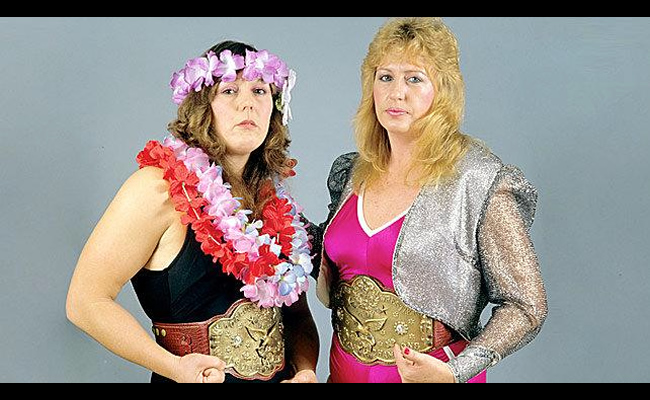 If you’ve been watching a lot of WWE television of late, you know that the women’s revolution is in full effect. Women like Sasha Banks, Charlotte, Bayley, Nia Jax, Becky Lynch, Alexa Bliss, Nikki Bella, Carmella and Asuka are rising up the card, and have even main-everted some of the company’s big “Pay Per Views (for lack of a better term)”–something virtually unheard of just a few years ago.

Because of the rapid rise of women’s wrestling, and the influx of talent being signed, many fans think that the WWE should soon give their women some secondary belts to fight over–specifically, a set of tag team titles. But did you know that, back when the company was known as the WWF, women’s tag team titles already existed? Well, they did, so let’s talk about them.

I had actually completely forgotten about these belts–seen above around the waists of The Glamour Girls, Leilani Kai and Judy Martin–until I decided to watch the very first Royal Rumble earlier this week as part of my gearing up process for the 2017 edition of the Royal Rumble, which airs on the WWE Network on January 29th.

Although it was not on PPV–the only pre-network Rumble to have that distinction–this was a pretty fun show. It featured the “Canadian Strongman” Dino Bravo attempting to break the world bench press record–he did it, but I’m pretty sure a few of the plates on the bar were fake, and Jesse “The Body” Ventura helped him cheat–Ricky Steamboat taking on “Ravishing” Rick Rude in a singles match, the Rumble match itself and the curious main event of the Islanders (Haku and Tama) facing the Young Stallions (Paul Roma and Jim Powers) in a two-out-of-three falls match. Even more curious, no major belts were even defended at the show… except for one. The WWF Women’s Tag Team Championships.

I won’t blame you if, like me, you simply didn’t know these belts existed. They were only in existence as the WWF Women’s Tag Team Championships for a short time, and only seven different women can even claim to have held the championships (more on why that’s an odd number later). If you look a little deeper, though, you’ll see that these belts actually have a fairly rich history–one that involves several all-time greats and even some WWE Hall of Fame inductees.

Before they were known as the WWF belts, these championships were actually known as the NWA Women’s World Tag Team Championships. The first women to carry this mantle were Ella Waldek and the incomparable Mae Young, starting in 1951 (records are spotty). The titles were defended regularly for the next 32 years, and held by such greats as fellow WWE Hall of Famers the Fabulous Moolah (twice with Toni Rose) and Wendi Richter (twice with Joyce Grables).

A funny thing happened in 1983, however, as the WWF decided to leave the NWA (for the last time). Vincent K. McMahon had purchased the company from his father, and had his sights set on nationalizing his promotion in order to monopolize the business and basically run the NWA–and every other unaffiliated promotion–into the ground. As part of that departure, Vince Jr. agreed to buy the rights to NWA Women’s World Tag Team titles. In 1984, the two women who last held the belts in the NWA, Velvet McIntyre and Princess Victoria, debuted in the WWF with their newly rebranded WWF Women’s Tag Team Championships.

Later that year, tragedy struck the team, as Princess Victoria broke her neck in a match and was forced to retire. Rather than disband the team and have a tournament to decide the new champs, WWF gave Velvet McIntyre a new partner–Desiree Petersen. This is why seven women (not six, eight or another even number) have held these title belts. After their 237 day reign at the top (811 for McIntyre), the duo dropped the belt to The aforementioned Glamour Girls in August of 1985.

That brings us back to January 24, 1988, and the original Royal Rumble, where the Glamour Girls faced off against the Jumping Bomb Angels (Noriyo Tateno and Itsuki Yamazaki) with the belts on the line in a two-out-of-three falls matchup. This was actually a pretty good back-and-forth matchup, with the Glamour Girls taking the first fall, and the Jumping Bomb Angels taking the last two and ending the Glamour Girls’ 906 day reign. The fans were super into the title change too, proving that wrestling fans have always loved women’s wrestling (not just now, or during the Attitude Era where it was all about sex and boobs and such).

Unfortunately for the JBAs, their title reign would be rather short-lived, and would end in a very controversial manner. According to wikipedia (I know, the best of sources), the JBAs and GGs were supposed to wrestle for the belts in Japan in 1989, with the Angels coming out on top in front of their home town fans. As it turns out, the Fabulous Moolah–a notorious backstage politician with a very well-known mean streak–was upset with Kai and Martin because the two had refused to continue giving Moolah a portion of their booking fees. As an act of revenge, Moolah informed the Japanese promoters running the show that Kai and Martin were supposed to win the belts. Unable to reach Pat Patterson in the United States to confirm (no internet, folks), the four agreed to the finish and the Glamour Girls took the belts back. When they got back to The States, WWF was furious with the two for the unauthorized title change, and allegedly scrapped plans for the four women to face each other for the belts at Wrestlemania V. In February of 1989, the titles were scrapped all-together, never to be defended again.

The belts were dead after five short years.

So what about the future? Do I think the WWE is ready to bring back the women’s tag titles? It’s hard to say. There’s definitely enough quality talent to support more belts, but I’m not quite sure the quantity is quite there yet. You need a division with a lot of wrestlers in it to support multiple titles, and I’m not sure there are enough women signed and ready for prime time WWE just yet. That being said, I know WWE is signing more and more women these days–specifically for a rumored women’s tournament early this year–so they might soon have enough actual wrestlers to support a tag team title.

Another complication is related to the brand split. The current format dictates that the belts would have to be defended only on one of the big shows, which I think is made impossible by the fact that the shows have separate rosters. Its hard enough for WWE to field a full division right now, let alone two. I just don’t think there will be enough women to field a brand-specific tag team title right now.

I do have one possible solution, though, assuming WWE signs enough women to support this. I wouldn’t mind seeing an hour-long show dedicated to just women’s wrestling, and the women’s division. The tag belts could be defended on there, but I do think they would have to be able to defend said belts on either brand, just to have enough wrestlers involved to keep it viable and entertaining. My proposal would be that hour-long women’s show where women from both brands could compete, and whoever holds the belt at a given time could then defend it on their “home” show–SmackdownLive or Raw.

Whatever the solution, I’m totally for a new Women’s Tag Team Championship. Hopefully WWE keeps signing more female talent and puts something together for us to enjoy sooner rather than later.

Enjoy this title match from 1988 between the Glamour Girls and the Jumping Bomb Angels: