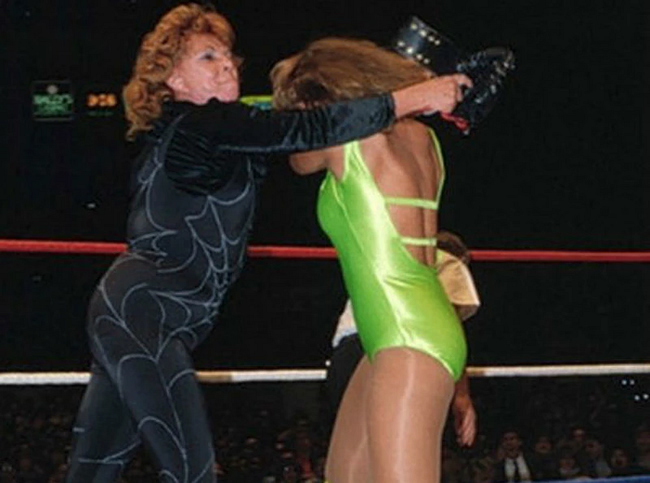 Ask any wrestling fan to name the biggest “shoot” (a term meaning unscripted, or real) event in WWE history, and to a person, they’ll most likely all name the same one. No, not the Brawl for All tournament from 1998, the Montreal Screwjob, of course! But did you know that, in 1985, long before Survivor Series 1997 and long before Bret Hart and Shawn Michaels were anyone of note in the then WWF, Vince McMahon orchestrated another legitimate shoot screwjob finish to get a belt off one of his champions?

The date was November 25, 1985. The WWF was putting on a show in Madison Square Garden, which was essentially the company’s home arena. One of the matches was set to be Wendi Richter defending her WWF Women’s Championship against a relatively unknown wrestler named Spider Lady. Unfortunately for Wendi, things turned out far differently from what she expected, and the notorious Fabulous Moolah conspired with Vince McMahon to make it all happen

First of all, let’s talk about Wendi Richter. In my post about the WWF Women’s Tag Team Championship, I briefly mentioned that she had held the belt twice–albeit under it’s previous NWA incarnation–but her career was so much more than that.

She got her start, appropriately enough for this story, as a pupil at the Lillian Ellison School of Professional Wrestling. Why is that appropriate? Because Lillian Ellison is the real name of none other than The Fabulous Moolah. To hear Richter tell it, Moolah was never actually there to train anyone–and Moolah’s got a bit of a notorious past when it comes to dealing with the athletes she was supposed to be training–but that’s probably a tale for another time.

After a short career in the NWA, as well as spending some time in the AWA under Verne Gagne and in Stampede Wrestling under the legendary Stu Hart, Richter joined the WWF full time in 1983. Soon, she would be one of the biggest stars in the promotion, and involved in an on-camera storyline that would help transform WWF from a regional promotion in the Northeastern part of the United States, to the worldwide enterprise it is today–the Rock ‘n’ Wrestling connection.

The angle got started when legendary WWF wrestler and manager “Captain” Lou Albano (you may know him as Mario from the Super Mario Bros. Super Show!) and pop icon of the day Cyndi Lauper met randomly at an airport. The chance meeting led to Albano’s appearance as Lauper’s dad in the Girls Just Want to Have Fun video, and an appearance by Lauper on Piper’s Pit–an interview segment on WWF television hosted by “Rowdy” Roddy Piper.

This angle led to WWE airing two specials on MTV. The first was named The Brawl to End It All, which featured Richter–representing Cyndi Lauper–wrestling against Moolah–representing Albano–for the WWF Women’s championship. Richter won the belt from Moolah that night in what was the highest rated show in MTV’s history at that point. This show, along with the second MTV special–The War to Settle the Score in February of 1985–helped the WWF build to the first Wrestlemania, which took place in March of 1985. At Wrestlemania, in the co-main event, Richter won the belt back from Leilani Kai–Kai had won it at The War to Settle the Score–and she held the title until this fateful night in November.

That brings us to Moolah. One thing you must know about Moolah, is that she had a shady history. Sure, she was a legend of women’s wrestling, but as I alluded to earlier, her climb to the top leaves a lot to be desired from the perspective of being a good person. For one thing, she basically booked all of the female wrestlers she trained, taking a cut of their pay for every appearance they made. Many of her wrestlers felt this was unfair, especially for her more established former trainees like Richter. At some point, Richter cut Moolah out and began getting her money directly from Vince McMahon, which led to a lot of tension between the two women.

Now, because of Richter’s personal success, as well as her role in the Rock ‘n’ Wrestling connection–and therefore all the publicity and success that the WWF had obtained in the last calendar year or so–the women’s champ began demanding more pay from Vince. After all, she was one of the bigger stars in the company at this point, and she wanted to be compensated as such (the nerve!). Well, if there’s one thing Vince McMahon doesn’t like, it’s to be strong-armed by talent.

With Richter threatening to leave if she didn’t get more money, and Vince loyal to Moolah because Moolah was loyal to him, the screwjob was set into motion.

As legend has it, Richter thought something was fishy when she arrived at the Garden and didn’t see the wrestler who had previously played the Spider Lady, but did see Moolah backstage at the show. When she went out for her match and the Spider Lady that did come out looked suspiciously like Moolah, Richter smelled a rat.

This led to a very awkward match where Richter was trying desperately to unmask the Spider Lady while visibly angrily attacking her–something Richter’s character was not known for at the time. However, Richter was a professional who wanted to protect the business, so she still carried the match on like a real professional wrestling match, meaning she sold for Spider Lady too. When Spider Lady landed blows, Richter went down. It’s kind of sad, when you think about it. Richter knew she was getting screwed over, but was still trying to protect her profession by carrying on a realistic match. Like I said… awkward.

Anyway, the match ended abruptly, when Spider Lady got Richter in a small package. The ref, clearly in on the screwjob, quickly counted to three and called for the bell, despite the fact that Richter kicked out shortly after the one count. I don’t even think the announcers, Gorilla Monsoon and Jesse “The Body” Ventura were in on what was going to happen, because they sounded more confused than anyone (although as one of Vince’s right-hand men, it’s hard to believe Monsoon didn’t know) about what was going on all match, and in the aftermath.

The scene after the match was an awkward disaster. Everyone kind of stood around while The Spider Lady celebrated. Richter then flipped her shit completely, and finally unmasked Spider Lady, revealing Moolah. As Moolah ran for her life, Richter basically slapped her around the ring, even hitting her with a backbreaker and attempting a pin, as the ref basically told her the match was over. Soon after, Richter grabbed the belt from the ref, refusing to give it up to anyone. Not the ref, not Moolah, not anyone. I’m telling you… super awkward.

Even famed WWF ring announcer Howard “The Fink” Finkel was confused. He made the announcement:“Ladies and gentlemen, the winner of this bout and new World Wrestling Federation Ladies Champion: The Spider? The Fabulous Moolah?” Did I mention it was awkward?

After the match, Richter went to the locker room, grabbed her stuff and left WWF. She never spoke to Moolah again. Richter kept her career going, wrestling for a bit a bit longer on the independents and in the AWA, even winning that promotion’s women’s world title in 1988.

For those of you wondering if Vince ever made it up to her, he did. In 2010, Richter was inducted into the WWE Hall of Fame. She even appeared on Raw in 2012 with her fellow Rock ‘n” Wrestling participant, Cyndi Lauper.

Anyway, the next time someone asks you about that time Vince screwed someone out of the title by calling for the bell early, don’t just assume they’re talking about Bret Hart. Wendi Richter was the original.

In the meantime, watch the MSG Screwjob for yourself!

Wendi Richter vs. Spider Lady – The Screwjob by MVP_Fan