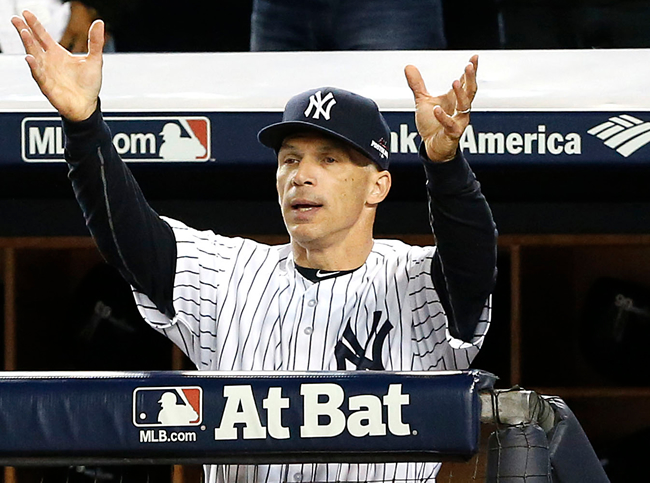 In the waining moments of Tuesday night’s heartbreaking, yet not all that surprising, loss to the Houston Astros in the Wild Card play-in game, I tweeted out that, although I didn’t think that particular game was his fault, I felt that the Yankees should fire Joe Girardi. It did not go over well at all (I was even referred to as “Hank,” which I thought was hilarious and fairly accurate in reference to my thoughts on managers), but I’m sticking to my guns here. In my opinion, Girardi needs to go, and I’m going to tell you why.

Let me tell you a little something about how I view the managerial role in baseball. Unlike basketball, or football, there’s not a whole lot a baseball manager can do to win or lose any particular ballgame. The meat and potatoes of winning and losing happens in the front office and between the lines on the field. Ownership is tasked with putting together the right team, and that team then has to go out and pitch, hit and catch the baseball. A manager is there to keep his guys motivated and rested properly, and to make key decisions in important situations.

In my opinion, this makes managing a bit of a thankless job if the team isn’t winning, especially in high-pressure situations like the one in the Bronx. I truly believe that a major league manager is far more likely to make a bad decision that loses a big game than they are likely to make a good decision that wins a big game. In a game situation, the impactful decisions the manager has to make are how long to leave the starter in, which relievers to bring in and when and whether or not to pinch-run or pinch-hit for certain guys in certain situations. Heck, let’s throw infield and outfield positioning in there as well, because that’s a much more common occurrence now than it was even seven years ago, before Girardi took over for Joe Torre in the Yankees dugout. In many cases, a championship team is built so that the manager’s decision making is minimized, and the true mettle of a manager comes out when things aren’t handed to them quite so neatly, and they have to actually make in-game decisions.

For example, let’s take a look at Girardi’s 2009 World Series-winning team. Before the season even began, he was handed three of the best free agents available on the market in Mark Teixeira, CC Sabathia and A.J. Burnett. The offense boasted still mostly in-prime superstars like Jorge Posada, Alex Rodriguez, Derek Jeter, Johnny Damon, Hideki Matsui, Nick Swisher and Robinson Cano; a team that scored 915 runs and hit 244 homers. The rotation included Sabathia, Burnett and Andy Pettitte; two of whom you could argue are potential Hall of Famers. The bullpen had David Robertson, Phil Hughes (who was lights out), a 10-1 Alfredo Aceves and the great Mariano Rivera. I’m not saying this World Series was gift-wrapped for Joe by upper management, but there wasn’t a whole lot of decision making to be done. The same thing can be said about the great teams from the Joe Torre dynasty. Torre regularly boasted one of the best lineups in baseball, some great starting pitching and a bullpen that didn’t need much more than six innings from their starters. Hell, we could, potentially take it back even further to Casey Stengel, who I’m not sure ever even managed a non-HOFer.

I’m not trying to take away from anyone’s accomplishments, but in Girardi and Torre’s cases, their weaknesses as managers were exposed when they didn’t have potential All-Stars all over the field, and had to start making decisions (I know, not having All-Stars everywhere would hamper many managers). After 2000, when he could no longer go from Rivera to John Wetteland or from Mike Stanton to Jeff Nelson to Rivera starting in the seventh inning, I often found myself watching Torre make incredibly stupid bullpen decisions. Remember when Tanyon Sturtze seemed to pitch every day, even long after his effectiveness had evaporated?

If we bring that back to Girardi’s team, how many games did Chasen Shreve get into in the second half, even though it was clear that he was not effective? How many times last month did Girardi use a million relievers to get only a couple of outs because he kept bringing in the wrong guys? How many times did guys like Caleb Cotham or Branden Pinder lose games because they were brought in to face guys they shouldn’t be facing? It didn’t happen every night, but it happened enough that the Yankees lost a few games here and there throughout the season, which, you could argue, might have cost them the few games they needed to potentially win the division. Also, if Alex Rodriguez and Mark Teixeira don’t turn back the clock and carry the team through the first half, I think a lot fewer people would be throwing rocks at the #FireGirardi bandwagon too.

Is Joe Girardi a good manager? Of course he is. He seems to do a good job of keeping players rested, which in turn should lead to less injuries (the litany of injuries suffered by his teams can’t be blamed on him at all), and he seems to be a good motivator and a respected figure in the clubhouse. Is Joe Girardi a great manager? I don’t think he is. I don’t think Joe Torre was either. Torre was called “Clueless Joe” back when he first signed, and I don’t think he suddenly got smarter in 1996. I just think he was put in the right situation, at the right time, with the right team. I think the same goes for Girardi in 2009. Girardi’s teams have only made the playoffs four times in his seven years, and you could argue that this year barely counts, because the team did everything it could to miss the playoffs in the last month.

I’ve seen and read many people commenting that New York fans are ridiculous because we expect to win the World Series every year, and when we don’t, we want everyone to be fired. Last night, as jeers rained down on Bret Gardner and Jacoby Ellsbury, people on Twitter were befuddled that the Yankees fans would boo their own players. Part of the reason every Yankees fan roots for this team is because they win a lot. I happened to become a fan during the late 80s and early 90s when the team stunk, but I’d be a liar if I told you I wasn’t influenced and inspired by the incredible tradition of winning that surrounded the franchise. If you’re a Yankees fan, you shouldn’t just be happy to be an also-ran. Sure, I’m proud of what this team accomplished this year, especially with all the kids that ended up contributing, but I’d be an even bigger liar if I told you I wasn’t completely disappointed in the finish. New York is a city of results, and the results are simply not there for Girardi and his staff.

I think the Yankees have a lot of changes to make this offseason, some of which might not be possible because of the current construction of the roster, but I think Girardi’s got to go. If that’s the only thing they do, the team still won’t win, but this is the Bronx. You can’t go six years without a World Series. Ask Joe Torre. He won five, and was still fired after seven winless seasons. While I think Giardi is a good manager who will experience at least a modicum of success wherever he manages, I look forward to the day when the new “Clueless Joe” joins Torre in the list of ex-Yankees managers. Honeymoon over.