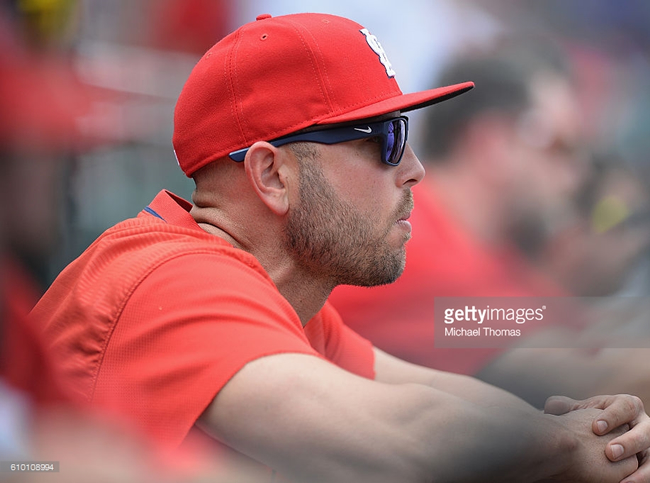 It’s no secret that the Yankees were in the market for a full time veteran DH. I recently wrote an article weighing the merits of them bringing in Mike Napoli, and I had a couple of others planned, but there’s no point in writing those (sorry, Chris Carter), because the Yankees have made their choice. So plug in your record player and bring out your old vinyl, because it’s time to celebrate. The Yankees landed their DH… Matt Holliday!

The deal–a one-year pact for $13 Million–came together Sunday night and is one that favors everyone involved. The Yankees get the right-handed power-hitting designated hitter they seem to have been chasing all offseason for a minimal years commitment and a very affordable salary. They also get a guy who can play first base or outfield in a real pinch, which is a nice bonus.

Holliday, meanwhile, gets to leave the National League–where he’s played 1,680 of his 1,773 career games. This is beneficial because he no longer has to play the field, and can focus solely on his power production. He also gets to prove he’s healthy and maybe earn himself a swan song multi-year contract when he’s a free agent again next year.

Some quick history about Holliday, whose reputation as a great hitter was cemented long ago. The Stillwater, Oklahoma native was originally taken by the Rockies in the 7th round of the 1998 amateur draft. He made a relatively slow climb up the minor league ladder, not making his big league debut until 2004, when he was 24 years old. Despite that, he was a bonafide superstar by his third season, hitting .340/.405/.607, leading the league in average, as well as RBI (137) and bashing 50 doubles and 36 home runs. He also led the NL in hits and total bases on his way to a second place finish in the NL MVP race.

That same season, the Rockies famously won 14 of their last 15 regular season to snatch a Wild Card berth from the Padres on the last day of the year. What a game that was. After the Padres had scored twice in the top of the 13th, the Rockies scored 3 runs off of Trevor Hoffman–did any of his 601 saves come in an important situation?–in the bottom of the frame to win the game 9-8. Of course, Holliday was the one to score the game-winner, as he trudged home on a walk-off shallow sac fly to end it. Sure, he was out, and he slammed his face on the ground nastily… but the umpire said he was safe, and the Padres went home. The Rockies swept their way through the first two rounds of the playoffs–giving them an astounding 21 wins in 22 games–but were ultimately swept by the Red Sox in the World Series. Still though, Holliday made his name that season. It would soon pay off.

Knowing they would eventually lose him to free agency after the 2009 season, the Rockies traded Holliday to Oakland for Carlos Gonzalez, Greg Smith and Huston Street (nice haul) before the 2008 season began. When July came around and the A’s weren’t in contention, they flipped Holliday to the Cardinals for Clayton Mortensen, Shane Peterson and Brett Wallace (not as nice a haul… ouch). Despite hitting free agency at the end of that season, Holliday chose to sign back with the Cardinals, inking a career-defining seven-year deal worth $120 Million. That contract came to an end about two months ago, and now Holliday is a Yankee.

Yes, he’s 36 years old. Yes, his MVP-type days are behind him. Yes, he’s battled injuries over the last couple of seasons (last year’s was a bad luck broken thumb). But that being said, the guy did manage to hit .246/.322/.461 with 20 doubles, 20 homers and 62 RBI in just about two-thirds of a season. If he can stay healthy, which being a full-time DH may help him accomplish, there’s no reason to think he won’t be capable of hitting 25-30 home runs and driving in 80 or 90 runs in the friendly confines of Yankees stadium. Even though he’s older, he’s still a prolific slugger that will command respect, and should slot in nicely behind Gary Sanchez in this lineup… unless Joe Girardi is a complete moron.

Because he’s only on a one-year deal, the Yankees can cut ties and split the DH at bats between any number of young players if Holliday doesn’t get the job done. In a world where the Yankees need some stop gaps to fill in while they wait for their kids to mature, this is a perfect signing.

Now take some god damn time to celebrate. Just one day out of life. It would be so nice!