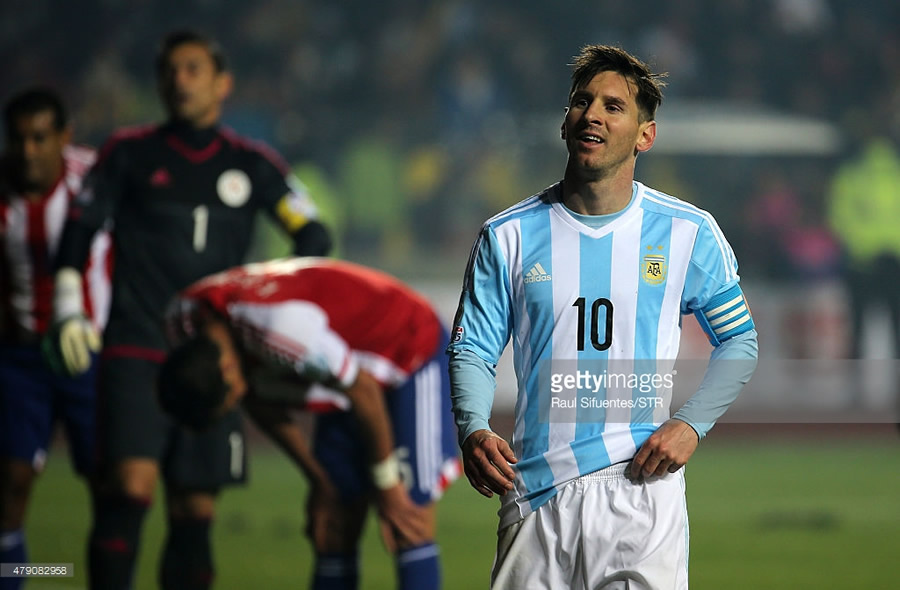 Last summer, I had to do something I never thought I’d ever do. I wanted a South American team to win the FIFA World Cup on South American soil, which left me with no choice but to root for Argentina. I can’t tell you how guilty and dirty I felt, but I couldn’t sit idly by and let a European country win for the first time ever in my home continent, could I? Well, today I find myself with that same disgusting guilty feeling, because I think I want Argentina to win the Copa América. Sigh. Just listen to me for a second, and I’ll explain.

I hate Argentina. Please no one get that twisted. That being said, you know what no one on this Argentina team has done? No one on this Argentina team has ever, as far as I know, stuck his finger up an opponent’s butt on the pitch while taunting said opponent because their father was going to jail for twenty years. No, it wasn’t Javier Mascherano that you heard did that! As I have documented, Chile’s Gonzalo Jara is the culprit, and he did it during Chile’s 1-0 defeat of La Celeste during the Round of 8. Jara is scum, and, although he’s suspended and won’t be playing in the final, he’s still on this Chilean squad.

You know what else no one on this Argentina team has done during this tournament? No Argentine player has gotten drunk and wrecked his car during this tournament. They also haven’t conveniently had their trial date scheduled for a few days after the tournament ends so that they can play the full tournament. I know, you guys are totally like… I heard Ángel Di María did that shit the other day! No. In fact, it was Chile’s thuggish, ruggish boner Arturo Vidal who did that. Vidal is also kind of a piece of crap, and I don’t want him to win anything.

There’s plenty of other reasons to not want Chile to win. First of all, they never have. The Copa America has been around for 99 years. It’s been played 44 times. Chile has hosted seven times (six before this year). Until 1993, only ten teams played, so they had a 10% chance to win right off the bat just based on odds. They have yet to win. What kind of a loser nation is this? Sure, nobody expects them to have 15 trophies like Uruguay, or 14 like Argentina. Nobody even expects them to have two, like Peru and Paraguay do. But come on, bro. You can’t even get one? Hell, Bolivia has one! Bolivia! Chile is a group of unlikable losers (seriously, who likes Alexis Sánchez or Gary Medel?), and they deserve to keep on losing.

I do have reasons why I shouldn’t root for Argentina. For one, a win would tie them with Uruguay for most Copa América trophies. To that, I say hey… at least they won’t be passing us any time soon. For two, The Argentina led by Messi has continuously underachieved, so why should we root for him now? Simply stated, he’s probably the best player in the world, and deserves some kind of international hardware. Lord knows he has more than enough club level accolades.

For me, it all comes down to this: the thought of Arturo Vidal drinking out of the trophy and then going out and killing someone with his car, or Gonzalo Jara putting his fingers anywhere near the cup, are too much. Plus, it’s quite clear that CONMEBOL constructed the brackets, and instructed the refs quite well, in order to all but gift-wrap this thing for Chile. I think I’m rooting for Argentina… sigh. But I swear, I still hate them!

One thought on “Sigh Do I Have to Root for Argentina Again?”