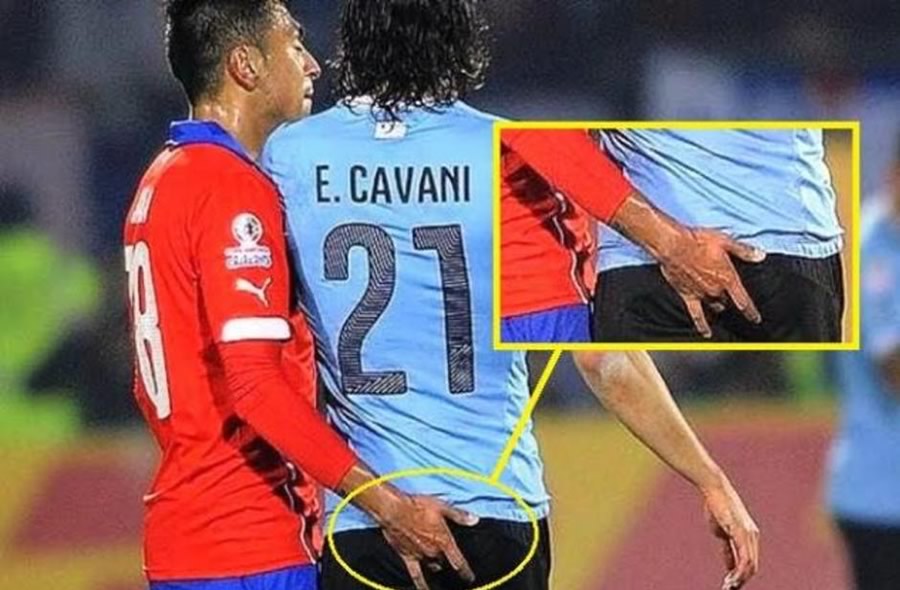 I like to judge on-pitch fútbol incidents by comparing the resulting punishment to what would happen if you did something in real life. Minor pushing and shoving happens all the time out at a bar, and nobody gets arrested for it. you just get told to cool it, or you get a warning. If you shove someone really hard, or hit them, you get kicked out of the bar. If you walk up behind someone and put your fingers in their ass, you’re probably never going to be allowed back in the bar again. They wouldn’t tell you to just stay home for a couple of nights and then come back. You’d go to jail. Well, when Chile’s Gonzalo Jara did that last thing Uruguayan striker Edinson Cavani, he got suspended for two games. Two! Are you serious, bro?

I haven’t had time to react to this game on the blog yet for a couple of reasons. First, I was a bit too bummed out that my Uruguayos weren’t going to be bringing home yet another Copa América trophy. Two, I wanted to see what CONMEBOL did to Jara for his, for lack of a better term, sexual assault. The incident happened in the 63rd minute of Uruguay’s 1-0 knockout stage loss to Chile last Wednesday. Cavani, who was already on a yellow for stupidly shoulder bumping the side judge earlier in the match, basically over-the-shoulder slapped Jara in the face lightly right after Chile had taken a free kick. Jara got a look on his face like an old British lady whose tea had been peed in (I never!) and immediately fell to the ground holding his cheek. The ref, who was awful all night and should be sent home himself, saw the slap and the fall, and gave Cavani the second yellow, which meant red, which pretty much doomed Uruguay.

After the booking, Cavani went absolutely ballistic, and an ugly scene broke out. Cavani had to be restrained, first by his own teammates, and then even by the Chilean players. I’d never seen him react so violently to a bad call. I thought that maybe all of the pent up frustration from his father’s legal troubles had finally built too much and exploded, and maybe that was part of it (Jara allegedly taunted him about the lengthy jail term his father faces too), but then BeIN Sport showed the reverse angle. Not only did Jara also slap Cavani in the face, he very clearly puts at least one of his fingers into Cavani’s “lower back.” Now, I’ve never seen Cavani’s ass, but I can only imagine it’s put together, at least biologically, a lot like my own. I know where Jara’s fingers were, and everyone on the broadcast did too. It was the extreme lower back. Like hard core extreme.

Whatever these guys do off the pitch is their business, but I can’t stress the following point enough: You don’t put your fingers in another man’s butt on the soccer pitch, even if he asks you to. If i did this to someone on the street, I’d go to jail for sexual assault, and for a very long time. Instead, Jara gets two games. Sure, he’ll miss the rest of the tournament for Chile, but is that really enough? If you asked Italy’s Giorgio Chiellini if he’d rather have been bitten by Luis Suárez, or had the Uruguayan stick a finger or two up his ass during the World Cup, which do you think he’d prefer? Off the pitch, who’s to say? On the pitch? Chiellini would take the bite any day. Well, Suárez got nine games for that bite. I know he was a multiple time offender with a history of disciplinary issues, but even the first time he bit someone, in 2010, he got two games. Are you telling me that biting a man is equally as bad as violating his “personal space?”

If we’re talking history of questionable behavior, Jara has a bit questionable behavior in his past as well. Once, during a World Cup qualifier in 2013, he grabbed the aformentioned Suárez’s testicles in order to get the Uruguayan to lose his famous temper (Suárez rightfully punched him in the face for his troubles). So he’s now known to have grabbed Súarez’s balls and Cavani’s butt. Diego Forlán must be thanking his lucky stars that he’s retired from international competition! Seriously, what’s next? Diego Rolán and Abél Hernández better watch their dicks… Literally! That’s the only fronteir Jara hasn’t seemed to have crossed.

All joking aside, what Jara did was very, very bad, and although CONMEBOL has seemingly let him off with a slap on the wrists, Jara’s club team, Mainz, might not be as lenient. Team Sporting Director Christian Heidel has already stated his disgust with the Chilean Fingerer™, promising to sell Jara to whoever makes an offer in his contract. Now, granted, Heidel said he was most disgusted by the pantomiming Jara did after the slap, and not the fact that he TRIED TO STICK HIS FINGER IN AN OPPONENT’S ASSHOLE IN THE MIDDLE OF THE FUCKING FIELD, and might just be trying to take advantage of the situation to get out from under a contract, but it’s still nice to see him take a stand.

Look. I know what happens on the pitch stays on the pitch. Also, I’m not even sure if Cavani’s red card, or the red card from Jorge Fucile later–that one sparked a really ugly incident during which Uruguayans surrounded the ref like they were going to kill him and at least one or two guys actually pushed him–actually caused Uruguay to lose the game, but the night was full of questionable pro-Chile calls. The lenient suspension of Jara, along with the even more lenient non-punishment of drunk driver extraordinaire Arturo Vidal, tells us all we need to know about how the host nation will be treated by CONMEBOL in this tournament. For me, they’re public enemy number 1.

Here’s hoping they lose in the finals, and never win the Copa at all.