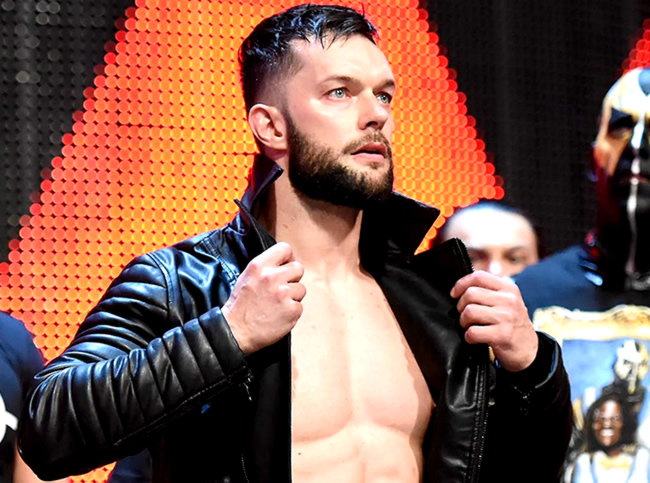 “If I told them once, I’ve told them a hundred times to put Spinal Tap first and Puppet Show last.” – Band manager Jeannine Pettibone in “This is Spinal Tap”

Vince Russo doesn’t like Finn Balor being booked into the main event at Summerslam.

The former WWE, WCW and TNA head writer eviscerated the idea of Balor–a past NXT champion and highly decorated New Japan star under the name Prince Devitt–winning a four-way dance by pinning Rusev and then defeating Roman Reigns in a one-on-one match on RAW as a means of entry into the top match of WWE’s second biggest show of the year.

Writing at fightful.com, Russo expressed his disgust with the company’s decision to put Balor in the August 21st title match against Seth Rollins by blasting what he perceives to be the completely unrealistic nature of the matches he won on RAW.

Russo makes several points throughout the piece, but the main crux of his argument boils down to the fact that, to him, Balor is nothing more than a middleweight that the much larger Rusev and–even more so–Reigns, would’ve “flossed their teeth” with in a shoot. Russo posits that for this reason, wrestling as we know it is over, since it proves that Vince McMahon and HHH–the key decision makers in WWE–have abandoned any semblance of what wrestling used to be in a foolish attempt to cater to the “internet wrestling community” who love smaller wrestlers that perform at a high in-ring level.

Russo’s argument is an interesting one.

But it is also utter and complete nonsense.

For starters, the entire “if this was a shoot” line of thinking is silly due to the simple and undeniable fact that pro wrestling is NOT a shoot. If it were, wrestlers would kick an opponent who ducked his head instead of leapfrogging him, a punch would end almost every match and we would currently be celebrating the six-year anniversary of borderline jobber Jack Swagger–a former All-American heavyweight wrestler at the University of Oklahoma–holding the WWE title.

More importantly, though, this notion of size difference being the indicator of realism is both outdated and mythical in pro wrestling. Royce Gracie showed us decades ago that in a real fight, a much smaller man can win if he is equipped with superior technique and skill.

And in the pro wrestling world, this concept has been on display countless times.

Kevin Nash had unquestionably the greatest and most believable matches of his career with Shawn Michaels, a man roughly a foot shorter and one hundred pounds lighter than him. Michaels participated in equally excellent matches with John Cena, HHH and Randy Orton, all of whom had a very similar size advantage to the one Rusev and Reigns held over Balor.

Despite worked exaggerations of his height and weight, Roddy Piper was barely bigger than Balor and he was one of the most successful stars of all time. Daniel Bryan, CM Punk, Dolph Ziggler and Dean Ambrose are all recent examples of wrestlers who are around Balor’s size, yet they still had interesting and credible feuds with Alberto Del Rio, Ryback, John Cena and Sheamus, who are all much larger.

The matches these wrestlers had with each other were mostly very good and widely accepted by the audience. This is because all of the wrestlers know how to work a credible match, which is the exact reason the fans like Balor.

To paraphrase the great Jerry Jarrett, a wrestling match or angle can be far fetched as long as it isn’t impossible. This is why even though Kevin Nash would likely–to use Russo’s words–”floss his teeth” with Shawn Michaels in a shoot, Michaels’ ability to make a match look good allowed fans to still buy in and get emotionally invested.

In other words, it didn’t matter if Michaels could win in a real fight when he was outsized, it only mattered if he could convince the fans that it wasn’t impossible for him to win.

He pulled this off on many occasions.

So have Bryan, Ziggler, Punk, Ambrose and numerous others.

And judging from the crowd reaction to Balor’s victories on Monday night, it seems he is plenty capable of doing the same thing.

But Russo knows all of this already. After all, he’s been in and around wrestling most of his adult life.

So why would he spew so much venom towards Finn Balor?

Well, BECAUSE he’s been in and around wrestling most of his adult life.

The complaints about a supposed lack of realism in wrestling are especially funny coming from a guy who scripted Mae Young giving birth to a hand and David Arquette–who makes Finn Balor look like Shaquille O’Neal in the size department–winning the WCW title. Likewise, grievances regarding too many superkicks in matches making them look phony ring quite hollow from the man who oversaw a handcuffed Mick Foley getting hit in the face with a steel chair so many times that he certainly would have ended up in the morgue if it were real.

Russo, however, conveniently forgets all of this–and much more–because he has a job to do: the job of working internet wrestling fans into a frenzy.

You see, for Vince Russo–who once ran a video store before Vince McMahon hired him as a magazine writer two decades ago–after so many years and so many chances with company after company, the well of working in pro wrestling has finally run dry.

WWE–specifically Stephanie McMahon–reportedly wants nothing to do with him. Despite a meeting with them a while back, Lucha Underground isn’t interested. Any chance of working for TNA again surely went out the window when his own accidental revelation of the covert deal he had with the company became a contributing factor to the loss of their Spike TV time slot. His subsequent attempts to get hired as a TNA consultant by Destination America and POP TV behind TNA owner Dixie Carter’s back couldn’t have been helpful to his career prospects, either. Ring of Honor, which boasts a following of the exact people Russo whines about–”internet fans” who hate him and his booking style–wouldn’t touch him in a million years.

So what does Russo do? He uses the anger and hatred of that very same “internet” fanbase in an attempt to earn money doing the only wrestling related job that’s still available to him: commenting about wrestling on the web, just like those “snarky” fans he claims to despise.

Russo’s old nemesis, Jim Cornette–who once bragged that he would proudly kill Russo if he could get away with it without going to jail–has staked out similar territory. The tennis racket-wielding manager who has been in wrestling so long he couldn’t possibly make a living doing anything else, has seen his temper and lack of appropriate temperament get him banished from every major wrestling company in existence.

Fortunately for Cornette, the same immature, tantrum-throwing, profanity-laden personality that has made him all but unemployable to wrestling companies has allowed him to carve out a niche for himself as a brash-talking sage who “calls it like he sees it.” He has used this to develop a following of fans who truly believe Cornette is some grand truth teller, and he has parlayed said following into sales of his books, videos and, most importantly, his time, with plenty of money coming in from shoot interviews, convention appearances and a weekly podcast.

In reality, Cornette isn’t speaking truth to power or “telling it like it is,” he’s simply doing what he always has: working the crowd. For all his bluster, the “Louisville Slugger” is just using a clever gimmick he created for himself and cutting the same great money-drawing promos he has for years.

Except this time, he’s not doing it to promote matches.

He’s doing it to promote his own brand.

Russo himself has recognized this, calling out Cornette for refusing to bury the hatchet, because bashing Russo has become such an integral part of Cornett’s popular rants.

And if you can’t mend fences with ’em, join ’em in the con.

Most internet wrestling fans love Balor and praised RAW. Russo’s column spit in all of their faces and sparked a lot of anger, but it sure generated a lot of discussion. People were buzzing about Vince Russo, and for once, it wasn’t regarding complaints about his booking.

With a subscription based network, Russo needs to get attention to stay relevant and draw money. It doesn’t matter whether he’s loved or hated, just whether or not people are listening to his opinions. A sizable portion of the listeners that made up Howard Stern’s audience for years hated him and were listening just to be outraged. Russo, who grew up in New York and surely listened to Stern in his youth, would kill to have that same disgust towards him monetized.

Or, as one of his old co-workers might say, Russo wants to build controversy in an attempt to create cash.

Thus, Russo works his gimmick as the ultimate “anti-internet wrestling fan” and intentionally stokes the rage of those who have always been disgusted with him and his brand of wrestling, hoping his carny act will bring in people who pay to get mad at him.  Like a band way past their heyday playing bowling alleys and hanging on for dear life because that’s all they know how to do, this may ultimately seem desperate. Unquestionably, it pales in comparison to running creative for WWE, WCW, or TNA, but with all other avenues in wrestling closed to him at this point and video stores no longer in existence, it is the one option he has left.

Unless he wants to be the opening act for a puppet show.