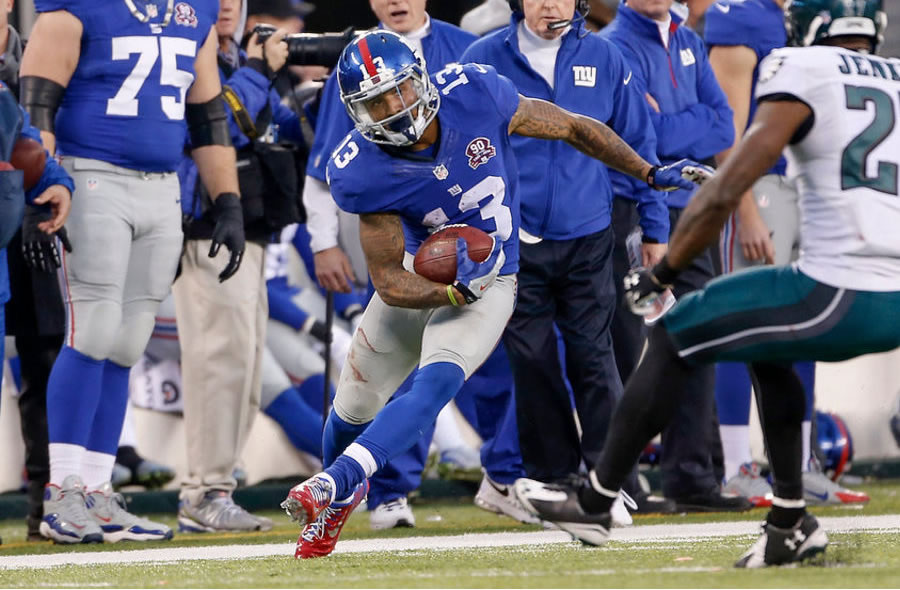 I know I haven’t put my nose to the grind stone as far as covering the Giants goes this year because they were pretty terrible, but I have managed to keep up with rookie Wide Receiver Odell Beckham, Jr. If he doesn’t win the Offensive Rookie of the Year Award this year, we will riot. He’s easily the best young player in the NFL right now, and here’s why.

First of all, let’s get to the numbers. Beckham had 91 catches for 1,305 yards and 12 TDs on the year, while also running 7 times for 35 yards and returning 21 punts for 171 yards. Those are great numbers for a veteran, let alone a rookie. Also, can we keep in mind that he missed basically all of training camp, and the first four games of the season, with a hamstring injury? For a rookie to miss his first NFL training camp, and step into the league in Week 5 and put up numbers like these… it’s down right incredible.

It actually gets even more impressive from there, when you take into account the fact that it took him three weeks to figure out what he was doing out there and build a relationship with Eli Manning. Over his first three games of the season (Weeks 5-7), Beckham only caught 11 passes for 106 yards and 3 TDs. I don’t know what he did during the Giants’ Week 8 bye, but he came back from that break like his ass was on fire. Over the next nine games, Beckham caught 80 passes for 1,199 yards and 9 TDs. When you break that down, it means that, over those last nine games, Beckham averaged almost 9 catches and 133 yards per game. If you take that pace and spread it over a full 16 game season, that’s 142 catches for 2,128 yards and 16 scores. That would have put him one catch behind Marvin Harrison (143) for the most in a single season, and it would have shattered the current single-season yards record held by Calvin Johnson (1,964). A rookie!

Now, granted, Beckham was helped out by a couple of factors. First of all, Victor Cruz destroyed his knee very early in the year, which opened up a spot for someone to step in and be the go to guy for Manning. If Cruz doesn’t get hurt, Beckham’s production would probably have suffered. I think the cream rises to the top, so he still would probably have emerged as a big time threat for this team, but Cruz is a heavily targeted guy in this offense, so I don’t think Beckham would have gotten to even 1,000 yards in his 12 games. Second of all, the Giants were terrible. I think this helped Beckham because, when you combine that with the Cruz injury, it created a situation where Eli might as well throw the ball to Beckham to see what kind of weapon the Giants might have for the next number of years. That being said, all opportunity does is knock. You have to open the door and let that sonofabitch in in order to be successful. Beckham did just that.

There’s definitely some other guys you could consider for the Offensive ROY this season. Teddy Bridgewater, Derek Carr and Blake Bortles have done pretty well at QB for their respective teams. Guys like Isaiah Crowell, Jeremy Hill, Bishop Sankey have been solid at RB during their rookie campaigns. Even at Wide Reciever, Kelvin Benjamin and Sammy Watkins have done well. I think the only real competition for Beckham, in my opinion, is Buccaneers WR Mike Evans. Evans had 68 catches for 1,051 yards for the Buccs, also scoring 12 TDs on the year. However, Evans played in 15 games this year. Beckham clearly had the better season, in less time, and with far more theatrics. We all remember “The Catch” he made earlier this season, right?

Anyway, If you’re reading this, and you have a vote, vote for Beckham, Jr. for the NFL Offensive Rookie of the Year. If you don’t, you should be ashamed of yourself. Happy New Year!