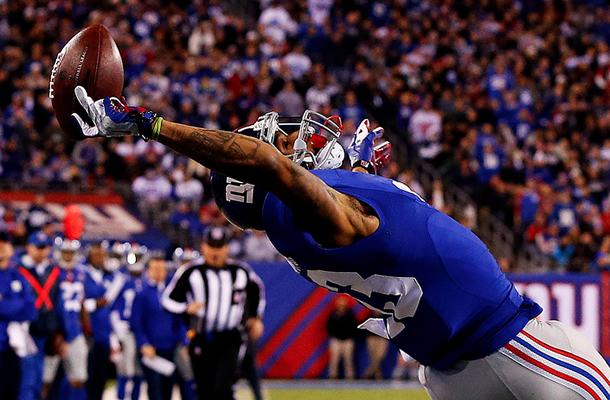 I know I’ve been remiss in covering the Giants lately, but I don’t feel any guilt. They flat out stink. In fact, I have barely even watched this team during their current six game losing streak, and I’m not really ashamed to admit any of that. However, I’m not going to focus on how shitty this team is in this post. Instead, I’m going to focus on the one positive thing we can all take away from this game. Odell Beckham might be the most talented Wide Receiver the Giants have ever had.

This is how important Beckham has become to this team, at least in my opinion: the most intense few minutes of the game last night were not during Eli Manning‘s late fourth quarter drive to give the G-Men a 28-23 lead, or during the subsequent two minutes when they basically let Tony Romo march down the field for the win (seriously, he had over 7 seconds to throw the ball on two different plays on that drive, including the game winning TD). None of that topped the intensity list. For me, the most intense moments of this game came when Beckham left with a back injury during the second half (don’t worry, he came back).

You see, up until that point, Beckham was having the best game of his young career. He had pulled down 10 catches for 147 yards and 2 TDs, including one on one of the greatest catches you’ll ever see. Here’s the video:

It has been a long time since we’ve seen a guy like this. Victor Cruz, who is currently out after suffering a pretty devastating knee injury a few weeks ago, has the blazing speed. Amani Tumor, who currently holds most of the Giants’ career receiving records, had great hands and was solid all around. Stephen Baker, “The Touchdown Maker,” had the ability to make touchdowns (at least according to his nickname). Beckham appears to be the kind of receiver that has all of the elite tools. He has the blazing speed, the incredible hands (did you see the video?) and even the touchdown-making ability in spades.

When the Giants made Beckham the 12th overall pick last May, I wrote this piece in which I said that I was hoping he would be the Desean Jackson the Giants refused to sign during free agency. I think he might be even better. Jackson is more of a complimentary target, using his blazing speed to make the big plays when the team needs it most. Beckham has the skills and talent to make those plays on every down. If he hadn’t missed the first four games of the season with a hamstring injury, there’s no telling how good he’d be right now (much better than his current 41 catches for 610 yards and 5 TDs). Despite missing all that time, Beckham could still end up with 1,000 yards on the season, which is pretty crazy.

He’s a god damn star, and really the only reason to watch the Giants right now.