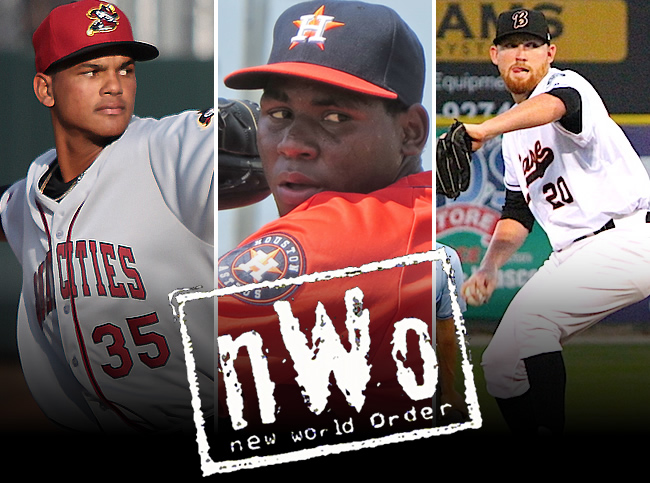 You knew the Yankees would be making some moves this offseason. Over the last six months of the Brian Cashman regime, the theme has been “in with the old, out with the new.” The latest examples of the Yankees expanding their NWO Yankees movement both happened this past week, when Cashman swung two more deals for prospects in another team’s top 30 list.

The first came on Thursday, when Cash sent former starting catcher Brian McCann to the Astros–a move we covered earlier today. The second came just two days later, when they sent James Pazos packing to the Mariners. So, who did Cashman get back in these deals? Let’s meet our new prospects right now.

Video of new @Yankees righthander Albert Abreu that i shot back in the spring. pic.twitter.com/0g9SePMrov

Albert Abreu was the centerpiece of the Brian McCann trade, and for good reason. Despite only signing for $185,000 in 2013, he ended up climbing the ladder rather quickly to become the Astros seventh ranked prospect last year. The scouting report on the 21-year-old righty is rather encouraging. Here’s what MLB Pipeline has to say:

Abreu’s fastball jumped from 87-91 mph when he turned pro to 93-97 mph two years later, peaking at 99. He backs up his heat with a pair of power breaking balls and a changeup with some fade. His slider is probably his best secondary pitch, though some scouts prefer his changeup.

Though Abreu has the potential to become a frontline starter, he’s a long way from getting there. He has a quick arm and not a lot of effort in his delivery, but he’s still learning to repeat it. Though his control and command need polish, he has the upside to pitch in the front half of a big league rotation.

That sounds pretty good to me. And, although his stats haven’t been incredible so far because of the command issues, do we want a guy with a mid-90s fastball that touches 99, two power breaking balls and a changeup? Yes please. In case you’re wondering how Abreu compares to the rest of the Yankees system, Pipeline slid him into the 10th slot on their Yankees top 30 list. This means that four of their top 10, and seven of their top 30 prospects weren’t in the system before this past non-waiver trade deadline. Impressive work, Mr. Cashman. Good on ya.

Jorge Guzman was the second player the Yankees got from Houston for McCann, and although he wasn’t a top 30 prospect in the Astros system, he comes with some big upside potential and an even bigger fastball. Here’s Baseball America’s scouting report on the 20-year-old right hander:

Nothing sums up the state of velocity in the game in 2016 more than Jorge Guzman, a righthander who can touch 101-103 mph at his best, but is better off when he gears down and sits 97-99 mph. When Guzman is tickling triple digits on the radar gun, hitters better stay loose as he’ll miss badly at times because he overthrows. But when he settles down to a steady 97-98, he can locate with a fastball that is still enough to blow hitters away. Guzman also has a potentially plus slider and a developing changeup. Most scouts expect he’ll end up as a power reliever in the long-term, but one who could challenge Mauricio Cabrera and Aroldis Chapman for the crown of hardest-throwing big league reliever.

So… I know there’s some stuff in there about extreme control issues when he throws too hard, and that his slider and changeup aren’t yet fully developed, and I’m supposed to care about that… but he throws 103 mph! 103! You know how fun it is to watch Dellin Betances hit 100 on the gun? And how fun it was to watch Aroldis Chapman do it on every pitch? Guzman could one day be in our bullpen doing the same thing (potentially with Chapman and Betances still around… wow).

Guzman seems to be a lot further away from the big leagues than Abreu, but any time you get a guy who throws that hard as a throw-in, it’s a good trade.

While the McCann trade was expected–at least by me–the second trade Cashman pulled off came kind of out of nowhere for me. For one thing, I didn’t know anyone was actively looking to trade for James Pazos. Secondly, I didn’t think anyone would want to give up a top fifteen prospect to get the 25-year-old left-handed reliever. Thanks, Mariners!

On Friday, the Yankees sent James Pazos, a Scranton shuttle-type reliever who has only pitched in 8 big league innings since making his Yankees debut in September of 2015, to the Mariners for their 14th best prospect, 21-year-old right-hander Zack Littell. Here’s the MLB Pipeline scouting report on Littell:

Littell’s heater is his best offering, registering in the low 90s and topping out at 94 with late life. He fearlessly attacks hitters with the pitch, commanding it to both sides of the plate while working down in the zone so as to generate ground-ball outs. His curveball is his primary secondary offering and makes him particularly tough on same-side hitters, but he’ll need to refine his changeup in order to neutralize lefties at higher levels.

After not missing bats early in his career, Littell has begun to pile up strikeouts this season thanks to an uptick in his stuff and overall pitchability. Throwing strikes has never been an issue for the right-hander, as he entered 2016 having walked 2.3 hitters per nine innings, and he receives rave reviews for his makeup, both on and off the mound.

You’re telling me the Yankees sent James Pazos, who has failed to establish himself in a Yankees bullpen that, at some point or another last year, had Anthony Swarzak, Blake Parker, Kirby Yates, Nick Goody and Tommy Layne as regular contributors, and they got back an organization’s 14th best prospect back in return? Really, Mariners? I mean hell, Littell was their fifth best pitching prospect. Fifth! For James Pazos!

From all the scouting reports I have read, it looks like Littell has a good chance at some day being in a big league rotation. He throws hard enough, attacks the zone well, and with good control. He also keeps the ball down, which is good for Yankees Stadium. He’s only reached A+ ball so far in his young career, but he’s been very good and has thrown a ton of innings. I wouldn’t be surprised to see the Yankees push him aggressively if he has success.