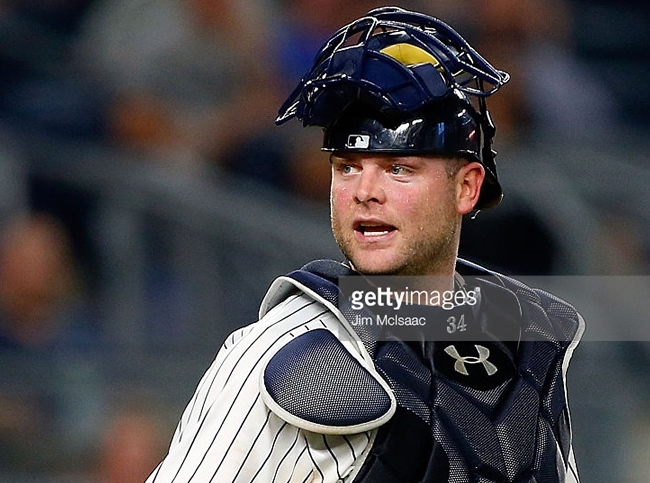 The last couple of weeks have been a bit of a down time at Jobu’s Rum. First of all, America is replacing one of the most charismatic, likable and scandal-free presidents this country has ever had with an orange-faced racist, sexist, misogynist sexual predator. Second of all… OK, fine. There is no second of all. But, as the monster fills his cabinet with white supremacists and neo-nazis, and we think about how many of our friends and family might be affected for ever because of it, I need to get back to some semblance of normalcy. For me, that’s Yankees baseball. So let’s talk about Brian McCann.

In case you haven’t heard, the Yankees continued the rise of what I have dubbed the “NWO Yankees” by clearing out yet another of what I am now calling the “Knights of the Old Republic” (probably only in this column, don’t worry) from their roster. They sent McCann, their 34-year old former starting catcher, to the Houston Astros for a couple of fire-balling pitching prospects. I’ll have more on them in a bit, but I would like to take this time to thank McCann for his time on the Yankees.

I can tell you the exact moment that I knew I wanted the Yankees to sign Brian McCann. No, it wasn’t opening day of the 2013 season, when the Yankees–with a straight fucking face–named Chris Stewart as their starting catcher. I mean, the Stewart regime did make me realize how desperate for catching the Yankees were–I never thought I would miss Russell Martin quite so much–and I knew McCann would be a free agent at the end of the season, but the actual moment I knew McCann was our next guy happened in late September of that 2013 season.

The Braves were playing the Brewers in a completely meaningless game. Carlos Gomez came up in the top of the first against Braves pitcher Paul Maholm and absolutely crushed a home run. Let’s rewind a bit. It seems that, a couple of months earlier, Maholm had plunked Gomez with a pitch, and Gomez was under the impression that the pitch was on purpose. When he came up to bat in this game, he had two things on his mind: hit a dinger and peacock around the bases to celebrate himself and mock the Braves. Watch the magic below:

Now here’s the thing. I hate the unwritten rules of Major League Baseball. I think they’re stupid, and I really do think they’re motivated almost entirely by deep-seeded racism. The guys who get reputations as “showboats” are almost always black or latino. I’m not saying everyone who gets mad at a player for flipping a bat is a racist. I don’t think that’s true at all. I’m just saying that the cultural phenomenon of playing the game “the right way” almost always has the underlying message that the “right way” is really the “white way.” Most of the enforcers of these unwritten rules probably don’t even realize this, but I think that’s what’s engrained in these “rules.” Personally, I think you should be able to do cartwheels around the bases if you hit a home run. Hell, you should be able to try to flip the bat over the right field wall if you want to. Who cares? Baseball should be fun.

All that being said, I think that what Gomez did probably merited a little in-your-face intervention. It’s one thing to pose, flip your bat and parade around the bases. It’s another to clearly do it to show your opponent up. I don’t think Gomez is to blame for the benches clearing, though. Braves 1B Freddie Freeman, Maholm and even McCann all share equal blame. Yes, Gomez was clearly trying to illicit a reaction from the Braves as part of his vengeance from the HBP from earlier in the season, but nobody had to get in his face about it. Playing the game “the right way” merits that those three guys let him round the bases and do what he wants, then take care of business and make sure that the Braves win the game. Or I guess they could have nailed him in the ribs with a fastball later.

Anyway. Despite my dislike of this type of policing the unwritten rules of baseball–can someone write these down already?–I remember thinking “Holy shit. McCann!” He stopped a guy from finishing a home run trot, got in his face and yelled “FUCK YOU!” over and over again until everyone fought about it. Maybe McCann didn’t like Gomez’s theatrics, but he sure as hell didn’t like the outfielder yelling at his teammates. It takes a set of balls to stop a guy’s home run trot. McCann could have retaliated later in the game, or later in the season. Instead, he aired his grievances right then and there. Like a boss… A crazy as hell boss, but a boss none the less. Officer McCann was born for me, and I knew right then that the Yankees had to sign him.

McCann also happened to come with the reputation of being a great defensive catcher, as well as being one of the best hitting catchers in the whole league, so the Yankees signed him to a five-year, $85 Million deal with a team option for a sixth year at $15M. At the time, I was ecstatic.

Fast forward a few years, and I wasn’t quite as rosy about the situation. I’m not going to sit here and say that the signing was an abject failure or anything. Over his three years in pinstripes, McCann hit .235/.313/.418 while averaging 23 home runs and 76 RBI per season. While those numbers might seem low for a guy being made to be a big-time slugger in the lineup, they were still good enough to make McCann a top ten catcher throughout his tenure on the Yankees. He also continued to play solid defense and call a good game. If he’d had more help in the lineup, his numbers might have been better, but in a silo at least, they didn’t need to be.

To make this already long story short, we all know what happened in 2016. Gary Sanchez came along and slugged his way into McCann’s roster spot. Rather than keep McCann around as a full-time DH and maybe a backup catcher, the Yankees decided to trade McCann before his value dropped any more. They hooked up with the Astros, who sent pitching prospects Albert Abreu and Jorge Guzman to the Bronx. I’ve already gone on too long in this article, so I’ll save a full write up about these two for later, but here’s a quick video breakdown of who they are, and what the future might hold for them.

Pretty good, right? A 34-year-old aging catcher netted two guys that throw absolute gas. Abreu is seen as the better prospect, and according to MLB Pipeline, is now the tenth best prospect in the Yankees already completely loaded minor league system. While Guzman is not as heralded because of control issues, the guy throws 102 mph, so everyone shut up about him.

It’s no secret that I wanted McCann traded this offseason. I didn’t really write a ton about it because I was still in my Trump’s America doldrums, but the time was right to trade him now. He’s clearly on the decline, he’s been repealed and replaced (thanks for the line there, Trump), and he wasn’t going to be happy just DHing. The truth is that he can still catch, and now he has an opportunity to do so, while unclogging the Catcher jam and saving the Yankees some money. They’re only picking up about $5.5 Million for each of the next two seasons, which will free up almost $12 Million a year. That money could go towards a DH–whether it’s a one-year stopgap like Carlos Beltran, or a big time bat like Edwin Encarnacion.

At the end of the day, the Yankees are shipping away one of their team leaders, and that’s always a bit of a downer. I liked McCann as a clubhouse guy. I like the way he calls games, and I like that he embraced the leadership role the Yankees asked him to fill. That being said, Deputy Sanchez is ready to take over the precinct. Carlos Gomez better watch the fuck out.