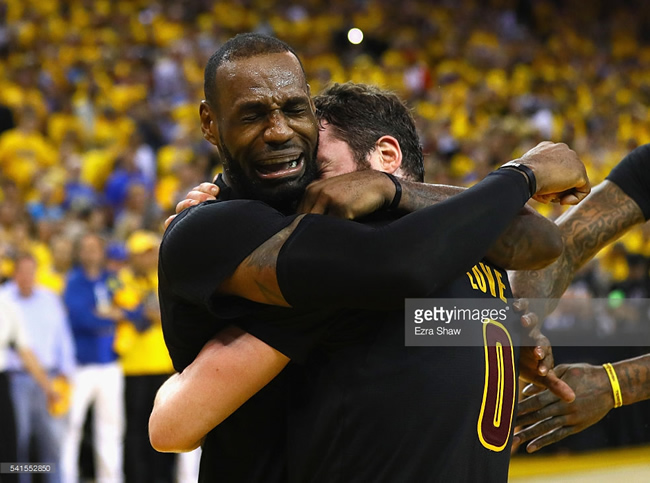 Has the point gotten through?”

Lebron James is on top of the world. The best basketball player of his era–whom a friend of mine once joked was like Magic Johnson in Karl Malone‘s body–is an NBA champion for the third time in six seasons. Overall, he has played in the NBA finals six straight times.

He had won two championships prior to this season, but this one was different. This one righted wrongs.

Money, fame and all-time legend status as the biggest sports hero Cleveland has ever seen? I’d say it is fair to deduce that, much like in ancient British times, being King James is a pretty good thing these days.

Not counting Skip Bayless’s lunacy, just about everybody who watches the NBA, writes about the NBA or can spell NBA has finally admitted that James is one of the five greatest players of all time. Bayless still can’t find it within himself to do this, of course, resorting as usual to trying to tear down the man who led the NBA finals’ first ever comeback from a 3-1 deficit by saying that Kyrie Irving should have been the MVP, that the San Antonio Spurs–who were eliminated in the Western Conference semi-finals–would have beaten Cleveland and that James’s Game 7 turning point block of Andre Iguodala was no big deal because Iguodala was playing hurt.

Bayless has made a career out of saying ridiculous things like this about James, but many thought this finals performance by the King would finally silence the cantankerous commentator. No such luck.

Still, even beyond Bayless, quite a few NBA historians continue to throw the name Michael Jordan in James’s face like a wife invoking her husband’s forgetting their wedding anniversary any time he tries to resist going to visit his in-laws.

Granted, for many of those people, there is virtually nothing James could do to stop people from saying “But Jordan was better” all the way to his Hall of Fame induction years from now. However, James isn’t done quite yet and he IS a free agent.  He says he isn’t looking to leave Cleveland at this point, but the words “at this point,” suggest that going elsewhere isn’t completely out of the question for him.

The options really are endless, ranging from staying in Cleveland and trying to build a dynasty to joining other established winners like San Antonio and Golden State to even going to a young team on the cusp–like Minnesota–and building an entirely new brand.

But there is a move he could make that would not only be shocking, brave, and groundbreaking, but might be the one thing Lebron James could do to actually guarantee nobody ever throws the name Michael Jordan in his face again.

He could go to Philadelphia.

See, the Philadelphia 76ers haven’t just been the worst team in the NBA over the past three seasons, they have been the worst team in professional sports. General Manager Sam Hinkie’s strategy of tanking while collecting draft picks and cap space sounds great on paper, but in order for it to work, you have to actually know what you are doing with those assets.

Hinkie was fired after an astoundingly awful 47-195 record in three seasons, and with his use of assets resulting in the signing of exactly zero quality free agents and a draft record that is such a mess it makes a three-year-old child’s diary entries seem logical.

Nerlens Noel has been mediocre, Jahlil Okafor has been such an off-court issue he is already being shopped after one season and Joel Embiid has been hurt for two years–the same amount of time Dario Saric has spent playing basketball on an entirely different continent. Michael Carter-Williams, the first pick of Hinkie’s tenure, won the Rookie of the Year award only to be shipped off a year later for a draft pick the 76ers still have yet to see.

Not that Hinkie himself would ever admit that, mind you. It takes a special kind of hubris to write a 13-page, 7,000 word resignation letter that not only doesn’t admit failure, but continues to tout the genius of a plan that ultimately yielded the worst three-year record in league history. But I guess we should have expected nothing less from the man who somehow found a way to equate not signing a guy he later got anyway–then D-Leaguer Robert Covington– he of the 39% shooting percentage–to some major tragedy like the explosion of the Challenger or the assassination of Martin Luther King, Jr.

Hinkie is like that friend who can’t stop telling you how great he is because he won a fantasy basketball league championship, and his favorite team would be so much better off if only he was in charge. The only difference here is that while you just laugh at your friend for being an idiot, in Hinkie’s case, he actually got put in charge, created a disaster of epic proportions and then expected a “thank you” for his incompetence.

As everybody’s favorite pet detective might say, “Alllllllrighty then.”

And if all of that weren’t enough, how about the mess Hinkie left behind? Okafor, Noel, Embiid–if he ever plays–and Saric–if he ever leaves Europe–are all front court players who essentially occupy the same territory on the basketball court. Sure, they just drafted LSU’s Ben Simmons–a prodigy in his own right–but even HE is a front court player. Put all of this up against a backdrop of an angry, unforgiving fanbase that hasn’t seen a championship in 33 years and well, I think it would be an understatement to say anybody signing with Philadelphia would be walking into a massive dumpster fire.

So why on earth should Lebron James sign with Philadelphia?

For the same reason he returned to Cleveland, only on a grander scale.

Winning in Cleveland made James a god in that city, but doing so in Philadelphia would earn him that status everywhere. Let’s face it; as great as Michael Jordan was, he only won championships for one team and never did it without fellow Hall-of-Famer Scottie Pippen by his side.

James may have one-upped Jordan by winning titles for two franchises, but his move back to Cleveland was equal parts regret for leaving them in a lurch, and knowing he had a pretty good basketball situation waiting for him. Playing for Philadelphia right now would provide him with the opportunity to achieve something that neither he, Jordan nor anybody else has dared to try: willingly go to the biggest loser in NBA history and turn them into a champion.

Doing that may be the only way to forever shake the specter of Michael Jordan and in the process accomplish what nobody believed could ever happen.

Get Skip Bayless to finally shut the f— up.