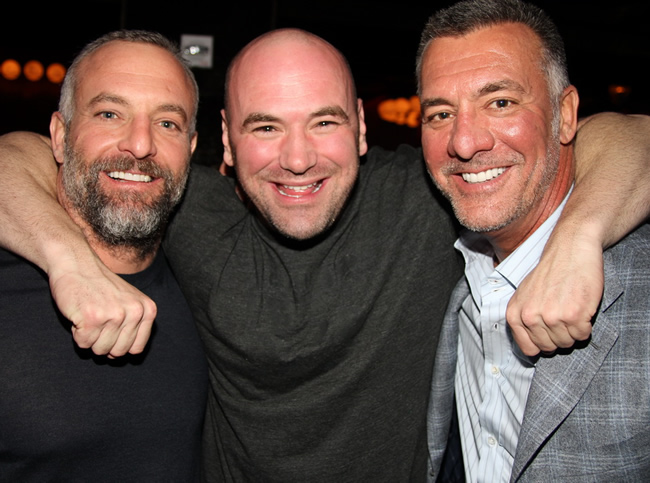 The sale of a majority stake in the Ultimate Fighting Championship for $4 billion is extraordinary, especially when you consider where the company and the sport of MMA were when Frank and Lorenzo Fertitta bought it for $2 million in 2000. There were no pay-per-view shows, no TV deals and instead of packed arenas, there were mostly partially-filled casinos. Things got so bad for a while, that the Fertittas nearly cut their losses and dumped the company on more than one occasion.

If it hadn’t been for their childhood buddy Dana White, who had convinced the Casino-magnates to buy it in the first place, it is possible they would have indeed given up and taken their lumps long ago.

Instead, they hung onto the flailing business and hoped for it to turn around. Fortunately, their old pal Dana, whom they had made President of the company, turned out to be right.

Sure, it took five years, and many millions of dollars in losses for success to come.

But when it came, it came big.

The turning point occurred in 2005 when White, realizing UFC needed TV exposure if it was ever going to succeed, made the risky move of paying for air time on Spike TV. Kevin Kay, Spike’s president at the time, was a bit of a risk taker in this instance as well, allowing the sport Senator John McCain had unfairly dubbed “human cockfighting” on his airwaves, even if it was paid programming.

White acknowledges this move was boom or bust, and it turned out to be the former in a major way. “The Ultimate Fighter,” a reality show featuring a house full of aspiring MMA fighters competing for a UFC contract was incredibly compelling and earned major mainstream attention for both UFC and Spike.

Viewers loved the drama of the program, which yielded strong ratings, but it was the show’s live finale that really turned UFC from fringe to mainstream. In the finale’s main event, Forrest Griffin and Stefan Bonnar battled for the UFC contract in what turned out to be the kind of beautifully bloody slugfest that had all too often been missing from boxing.

The next day, Griffin vs Bonnar was all anybody could talk about and from there, the UFC began its meteoric rise from what the Fertittas had purchased–a sport that was barely visible and even banned in numerous states–to the bar-packing, arena-filling, shirt-selling, $600 million-per-year phenomenon that it is today.

The Fertittas, it turns out, are very lucky they stuck around long enough to reap the rewards of their initial investment.

They could end up being equally lucky to have gotten out before what looks like a potentially sizable downfall on the horizon, one that may have been telegraphed by UFC’s latest pay-per-view.

UFC 200 on July 9, the biggest show in company history, turned out to be a mess of epic proportions.

For starters, just days before the show, the main event rematch between light heavyweight kingpin Jon Jones (pictured above) and current champion Daniel Cormier, was cancelled after Jones was flagged for a USADA violation involving performance enhancing drugs.

The fight was interesting to fans because Jones had the belt taken from him following a hit-and-run incident and a positive drug test for cocaine use, never having lost it to Cormier, whom he had defeated in their previous encounter. For Jones, it was a chance to reclaim the title he felt was still rightfully his and for Cormier, it was an opportunity to avenge the only loss of his career and prove he was the true champion.

Silva, while an all-time great, was predictably too small and too far past his best after a massive leg fracture three years ago to hang with the light heavyweight champion. Cormier, a former captain of the U.S. Olympic wrestling team, used his size, strength, and superior wrestling to take Silva down en route to an easy three round decision. Silva, sadly, is just a name at this point, a fact that became abundantly clear while watching his domination by Cormier.

The real story of the fight, however, was not who was in it, but rather, who WASN’T in it.

Jon Jones, arguably the most athletically gifted fighter in the sport’s history now faces a two-year suspension for the USADA violation.  This means his career, which had already stalled due to a prior suspension stemming from the hit-and-run issue, will likely be put on hold yet again.

Lorenzo once mused to his son Calogero in “A Bronx Tale” that there was nothing sadder than wasted talent, a point that was clearly lost on Jones. For a guy who has arguably the most natural talent of any fighter in the world, a two-year absence after only having fought once in the past two years as it is, seems like enough wasted talent to fill an auditorium.

Then there was Brock Lesnar (above), the company’s all-time biggest money maker, who shockingly returned to the Octagon despite having a contract with WWE. Lesnar, a genetic freak, somehow overcame a four-and-a-half year layoff to ground, pound, and defeat top ten heavyweight Mark Hunt. After the fight, the former UFC and WWE heavyweight champion seemed humble and didn’t commit to fighting again, but strongly implied he would like to do so because he had so much fun.

That parade was rained on several days later, when we found out that even genetic freaks take shortcuts.

Whether or not Lesnar ever fights again may be a settled issue, as it was revealed that he, too, was flagged for a USADA violation. While he still has that lucrative WWE contract to fall back on, it would appear that at 39 and facing a two-year suspension, it is highly probable Lesnar’s career as a fighter is over.

And what about women’s bantamweight champion, Miesha Tate? In the wake of Ronda Rousey apparently joining the witness protection program, Tate had stepped up and defeated her conqueror, Holy Holm, and in the process turned herself into the UFC’s biggest female attraction. Her gritty fighting style, down-to-earth personality, and girl next door-like good looks had made her a very popular figure among the sport’s fanbase.

Sadly, much like Jones and Lesnar, her success came to a screeching halt at UFC 200, too.

Amanda Nunes didn’t just beat Tate, she destroyed her, punishing the now former champion with brutal strikes en route to forcing her to tap out to a rear naked choke mere minutes into the first round of the fight.

Tate’s rise to the top seems to have ended as quickly as it began and the women’s bantamweight title, which has changed hands in three straight fights, continues to be a prop in an ongoing game of musical chairs.

The poor fortunes of these three fighters offers a glimpse into what the UFC’s future could very easily be.

The stars of the past–Chuck Liddell, Randy Couture, Georges St Pierre, Tito Ortiz–are gone and most of the ones left – Anderson Silva, Dan Henderson – are not going to be around for much longer. With Lesnar and Jones likely to be suspended, Tate damaged, and Ronda Rousey seemingly uninterested in leaving her house, the only star the company has left to market is Connor McGreggor.

McGreggor, who cemented his status as a star by quickly knocking out longtime featherweight champion Jose Aldo, had his mouth shut pretty good in his last fight against Nate Diaz, who stepped in on short notice and choked out the brash talking Irishman. The rematch takes place next month and if Diaz wins again, it could be curtains for McGreggor as a top draw.

After all, talking is fun, but nobody wants to pony up big money to see a show headlined by a guy who can’t even win his fights.

Unfortunately for the UFC, they are on the verge of suffering from the same problem WWE has dealt with for years. Once the attitude era ended and the stars of that generation–most especially Steve Austin and the Rock–were no longer around, the company was largely unable to create new stars the audience was clamoring to see and a slow but steady decline kicked in.

Today, WWE’s only true “stars” are John Cena–a guy much of the audience hates–and Brock Lesnar–a guy who is rarely around–and the product is watched by a fraction of the amount of people it was during the glory years. The company still makes money and has an audience, but it is nothing close to the revenue generating powerhouse it once was.

As WWE found out the hard way, creating new stars is essential to continued success and their inability to do this has cost them greatly. UFC, while not exactly the same product, is in a similar boat.

Just as with wrestling, hardcore fans will always be there, but if you want the casual fan and his buddies hanging out on a Saturday night to chip in together on a $70 pay-per-view, you need something more interesting than just the fights themselves. Compelling fighters, something UFC currently has a dearth of, are the key to this, and it is unclear when, or if, the next Georges St Pierre, Randy Couture, Chuck Liddell, or Brock Lesnar will ever show up.

It appears that the Fertittas, who didn’t sell when times were bad, are well aware of this. They know the tough road ahead and see clear as day that their $2 million investment turned $600 million-per-year cash cow could be headed south sooner rather than later. The brothers understand that they bought low and it is time to sell high.