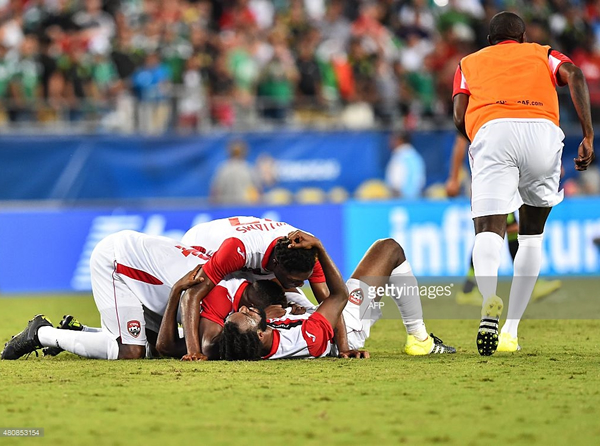 I know we’ve been a little lackadaisical in our coverage of the 2015 Gold Cup so far, but I’m planning a wedding (OK so my fiancee is planning, I’m doing what she tells me) and I launched a podcast, so bear with me a little bit. Anyway, did you guys watch the end of the Mexico vs. Trinidad and Tobago game last night? A ridiculous game with a ridiculous ending and another head shake-inducing moment from the Mexican fans. Let’s talk about it.

First of all, we have to talk about the Mexican fans here. I know we hit the El Tri supporters hard because of their homophobic chants on goal kicks at the 2014 World Cup–something that, unfortunately, has since spread all over South America–but we have to again point out the lacking class of the fan base. After a great game, which Mexico seemed poised to win, a collection of human garbage in the stands in Charlotte, North Carolina began throwing plastic bottles and cups onto the pitch, aimed directly at T&T’s Joevin Jones, who was trying to hit a potential game-tying corner kick on what was to be the last play of the match.

As the bottles rained down, and laser pointers shined in his eyes, Jones threw his arms in the air as if he’d just seen two naked bikers having sex in the woods and wanted to yell “how am I supposed to CHIP with that going on?!”(Shooter McGavin, y’all) When no one responded to his pleas (thanks, refs), he simply said “Eff that Ess!” (sound it out) and fired the ball into the box. As if decided by fate to curse the human garbage in the stands, the corner cross fell directly to the head of teammate Yohance Marshall, who hammered it into the back of the net to seal not only a draw for T&T, but also to secure them a spot at the top of the group.

If you ask me, it was deserved. Mexican fans continuously showed their lack of class and an overall sense of not having any social graces whatsoever (they famously throw, among other things, cups of urine at players during Liga MX matches), and that group deserved to have that ball go into the back of the net. I’m not trying to group the entire country of Mexico, the team on the pitch or even all fans of El Tri into one bad lump of shit, but I always say that you’re only as strong as your weakest link. You can have a bowl of the most delicious ice cream in the world in front of you, but if you dump a turd into it, it’s not gonna be one of Baskin-Robbins’ 36 flavors. Those evil turds in the stands deserved this loss, and the team was simply swallowed up in their bad karma.

It’s made all the more a shame, because the game itself was pretty entertaining. Mexico was up 2-0 51 minutes into the match on goals by Paul Aguilar (32′) and Carlos Vela (52′), but two goals by Keron Cummings (55′ and 67′) and one by Kenwyne Jones (58′) gave Trinidad and Tobago a 3-2 lead not even 20 minutes later. Mexico’s Andrés Guardado equalized in the 88th, and El Tri took the lead on a devastating own goal by Kenwayne in the 91st minute. That set the scene for the disgusting fan display, and amazing karma display, that we saw in the 94th.

Over the last few years, I’ve come to appreciate how Mexico plays on the pitch, and have even found myself wishing them well in tournaments (it doesn’t hurt that my fiancee is half Mexican), but it’s hard to root for Mexico knowing that their fans are some of the worst people on earth. Now, is this much different from what other awful fan bases do around the world? Probably not, but I’m not exposed to it on such a regular basis. I think Mexico should be forced to play all of their games in empty stadiums. It would make it a lot easier for me to root for them.

As far as the tournament goes, Mexico still moves on to the knockout round, and a date with Costa Rica. Trinidad and Tobago will face a less strenuous opponent in Panama. Here’s hoping we keep getting good games from these two teams, only without all the bullshit from the fans. Disappointing.