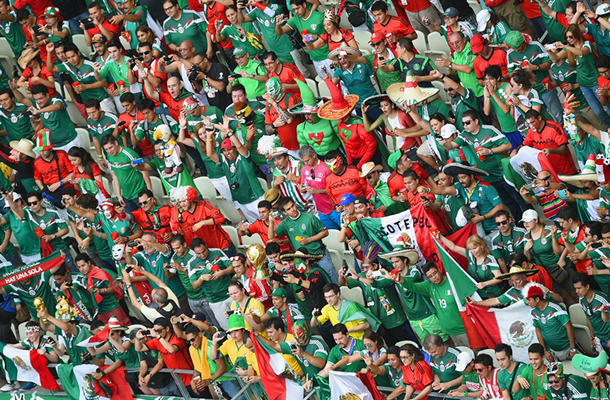 FIFA has ruled that Mexico should not be sanctioned regarding improper fan conduct involving homophobic chants., and I’m not very happy about it. For those of you unaware, FIFA has begun punishing teams–both international squads and league squads all around the world–for racist chants and actions towards players of different backgrounds. After complaints by the anti-discrimination group FARE (Football Against Racism in Europe) about the usage of the word puto by Mexican (and some Brazilian) fans, FIFA opened an investigation into the matter.

I’m sure you all have noticed that Mexican fans make a lot of noise on goal kicks belonging to opponents. Those of you who still refuse to buy a Spanish/English dictionary despite my countless suggestions to do so, probably don’t know what you’re hearing. It is a big tradition in Mexican fútbol to make a lot of noise before the kicks (complete with jazz hands type finger wagging) and then immediately yell the word “puto” as the kick is being made. The word, by definition, means male prostitute. In most latin american countries however, and I apologize for using this word in this post, puto is a word that is basically the equivalent of “faggot.” I don’t want to sugar coat it and say that it means “gay,” because the word holds a lot more weight than that. It’s definitely a mean slur. There’s no doubt about it.

I’m happy that FARE’s complaints did not go unheard, and that FIFA investigated the matter. Unfortunately, FIFA has managed to, yet again, completely drop the ball when protecting it’s players. After their investigation, this is what a FIFA spokeswoman said:

“The FIFA disciplinary committee has decided that the incident in question is not considered insulting in this specific contest. All charges against the Mexican FA have been dismissed.”a

I’d like to know this: since when is thousands of people screaming the word “faggot” at a player not insulting? I mean, I know that a lot of people throw the word gay, or fag or whatever around and aren’t necessarily intending to to say that the person or thing they are talking about is homosexual, but it’s still a terrible word rooted in hate. Just because I decide that the word “Fuck” is not offensive, doesn’t mean I can go around saying it around little kids and at my office and what not.

Look. I went to a lot of Boston College sporting events while hammered as a student, and I know I yelled many offensive things at many opposing players, and I never meant it as a personal attack against them, but I’m still an idiot for yelling the things I yelled, and should have been disciplined for it. The problem is that, when 40,000 people are yelling it, what are you going to do? You can’t kick everyone out. The only thing FIFA can do is to discipline the teams, in hopes of putting fear into fans so that they will stop their actions. The tactic, although it took decades too long to implement, is the most effective way to stop people from directing these chants at opposing players.

That being said, I’m not certain the proper response to these chants in Brazil would be to discipline the team either. While FIFA has made it clear around the world that racism isn’t welcome in the stands, I don’t think they realize that anti-gay remarks should be taken just as seriously. If we’re going to start punishing teams for these chants, they need to know that these comments will lead to punishment, so that they have ample time to do something about it themselves–through education and internal sanctioning–before FIFA steps in with big time sanctions. I haven’t heard any reports of racism at this cup, and that’s in large part because everyone knows that if they yell the n-word, throw bananas on the pitch or whatever other awful things go on, their team will get punished. Now, I’m not saying racism is gone from fútbol, because it is still a huge problem in Europe, but at least the process of trying to eradicate hate has begun. FIFA needs to put words like puto in the same category as racial slurs, and make it clear that these words won’t be tolerated. They completely failed to do that with this ruling.

If you watched the Mexico vs. Croatia game today–a great game by the way–Mexican fans were yelling the word more loudly than ever, and even on corner and free kicks now too. Not only that, but cameras showed people on television during the noise making part of their schtick, which basically glorified what the fans were doing. While ESPN announcers touched upon the subject, they did so only to mention that the fans had been cleared. They didn’t really say anything in depth about the situation. I wonder if FIFA had anything to do with that too.

By burying their heads in the sand on this issue, FIFA has missed a chance to lay the groundwork for change and tolerance. In fact, by saying that the usage of this word is not even insulting, they basically made it OK to gay bash at stadiums all over the world. FIFA faced decades of criticism for their slow reaction to racism in the stands, and it seems like they have literally learned nothing. I hope this particular issue doesn’t end here. As long as they don’t play Uruguay or the U.S., I’ll still be rooting for the Mexican team moving forward, as I have been throughout this cup–sorry everyone, my girlfriend is half Mexican. i like to eat and not sleep on the couch. I hope that, as Mexico travels farther in the tournament, more attention will be brought to this issue, so that FIFA can realize the mistake they made. Hopefully, when 2018 rolls around, we’ll have gotten rid of this awful custom.

One thought on “Not Insulting? FIFA Drops the Ball Again”