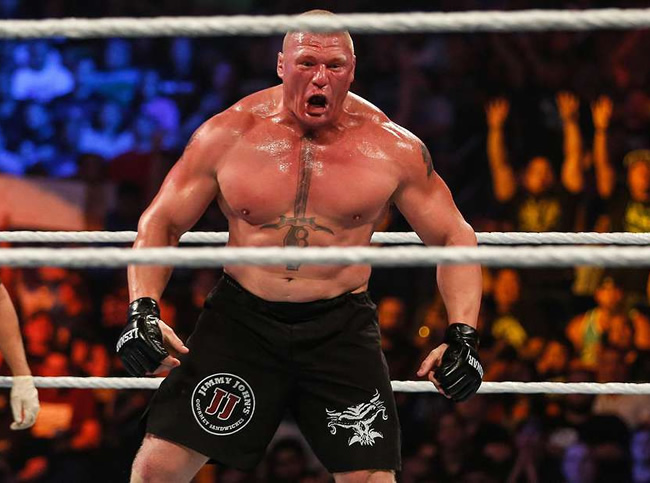 “I figure a white, blue-chip athlete like myself deserves something extra. So, you know, this is what I’m looking for: About 30 grand. I’d like to have it in cash. Just toss it in one of those gym bags you got.” – Ricky Roe to Coach Pete Bell in “Blue Chips”

Brock Lesnar is a once-in-a-generation talent. Anybody with eyes can see that the former NCAA heavyweight wrestling champion with the strength of a bull and the agility of a cat is capable of amazing athletic feats for a man who stands 6’3″ and weighs nearly 300 lbs.

Yet his athletic gifts are just the tip of the iceberg.

On Saturday, June 4, just hours before UFC took to pay-per-view, noted MMA journalist Ariel Helwani–in a move that would result in Dana White channeling Donald Trump and temporarily revoking his press credentials–reported that Lesnar had reached an agreement with UFC to return and fight on the biggest show in company history, UFC 200 in Las Vegas on July 9th.

Immediately, the internet damn near exploded. Brock Lesnar is one year into a three-year contract with WWE, so how could this possibly be happening?

In fact, this is the exact scenario you would imagine Vince McMahon was hoping to avoid when he signed the phenom to that lucrative contract last year. UFC, WWE–and to a much lesser extent, the Viacom owned Bellator MMA–were engaged in a high stakes bidding war for Lesnar’s services, a battle that was eventually won by McMahon. According to reports at the time, a multi-million dollar guarantee from a fake sport for part-time work was enough to keep the then 37-year-old Lesnar in the wrestling ring and out of the Octagon, despite UFC supposedly offering more money.

But as we know now, that wasn’t the end of the story.

With Lesnar, it never is.

After all, this is a guy who worked an unheard of six-figure developmental contract out of Vince McMahon straight out of college. The same guy who left WWE in 2004 in an attempt to make the roster of the NFL’s Minnesota Vikings, which he almost did despite being 27 and not having played organized football in a decade.

WWE thought things might not work out for Lesnar in the NFL, so they only let him out of his deal if he would sign a no-compete banning him from pro wrestling or combat sports for the duration of his contract, which ran through 2010.

They were right, but unfortunately for them, it didn’t matter. Lesnar sued WWE and forced them into a settlement which included the waiving of his no-compete clause.

He even rubbed it in, too, taunting McMahon by renaming his patented F-5 finishing hold, “the Verdict” when performing for New Japan Pro Wrestling.

He then went on to MMA and, in just his fourth professional fight, he won the most coveted prize in the sport, the UFC heavyweight championship. In the end, Lesnar became one of only two men in the modern era–the other being Dwayne “the Rock” Johnson–to become a bigger star outside of WWE than in it and in the process, upped his value so much that WWE had to offer him the sun, the moon, and the stars to come back in 2012.

McMahon had been defeated. The man who boldly bragged about getting the better of the U.S. Government could not get the better of Brock Lesnar.

Lesnar, as he always does, found a way to get everything he wanted and then some. When he re-signed with WWE roughly one-year ago, he said he just didn’t have it in him to fight anymore.

But now? Oh, he’s singing a much different tune, telling everybody how the decision not to go back to UFC has haunted him since the day he made it. He says since he is finally free of the diverticulitis that plagued him during his first UFC run, he owes it to himself to see just how good he really can be.

It is possible this is all true, but if it is, why not just go to McMahon and ask for his outright release so he can fight full-time and prove his mettle in MMA? He already embarrassed WWE’s Chairman once, you’d figure McMahon wouldn’t be in a hurry to be made a fool of again if Lesnar threatened a second lawsuit. Instead, why only arrange for a single fight, which is being billed as a “one-off?”

The answer is leverage.

See, Lesnar, despite his gruff exterior and reputation for being a “hillbilly” who just likes to roam the woods and kill things, is one of the shrewdest men to ever enter pro wrestling or MMA. He wanted that WWE contract for the easy money and even easier schedule, but he also knew it would leave him plenty of free time to train.

So, Lesnar set the wheels in motion on the possibility of a one-night UFC return around Wrestlemania, and then sat back and waited for his opportunity to appear, which thanks to Connor McGreggor, it did.

McGregor’s very public dust up with UFC back in late April left the company without a true, bonafide top notch draw for UFC 200, the biggest MMA show of all time. Sure, the rematch between Jon Jones and Daniel Cormier is interesting to fans, but without Mcgreggor, Ronda Rousey or George St Pierre, the show would never reach the buyrate that had been expected.

But it will now.

UFC 200 will boast the presence of Lesnar, the promotion’s biggest draw of all time, who returns a conquering hero for the biggest single paycheck he will ever receive. Dana White may have lost out initially, but despite his frustrating negotiations with Lesnar in the past, he’s more than happy to have his cash cow back, even if it is for just one show, and completely on Lesnar’s terms.

Who knows what McMahon is telling himself to justify this, or what UFC promised him to make him think it is worth his while, but ultimately, he will watch with baited breath as his multi-million dollar investment goes out to the Octagon to make a fortune for arguably his biggest competitor.

And Brock Lesnar?  He faces Mark Hunt on July 9, but no matter what happens in that fight,  he wins because he got everything he wanted yet again.

That is what separates Lesnar from the fans and WWE wrestlers who complain about his cushy deal.  Brock Lesnar is a star and a draw of the highest magnitude, who is worth every penny he makes and he knows it.  He is a man who always has and always will understand his value and won’t settle for a dime less.

Even if it won’t all fit in a gym bag.