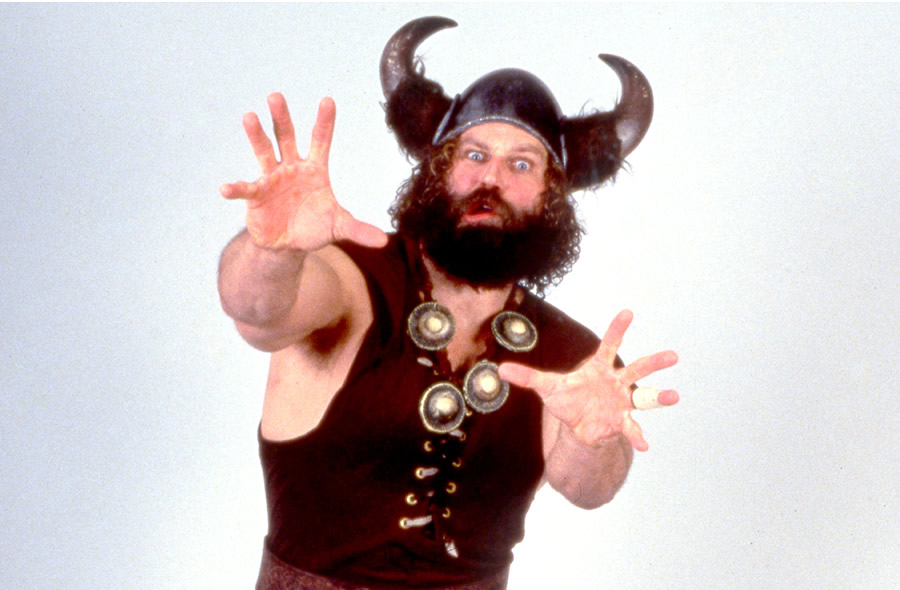 I’m not sure if you guys watch Vikings on HISTORY at all, but I feel like if anyone involved in any way with the show, which is hitting the end of Season 3 this week, were to see this week’s inductee into the Bad Gimmick Hall of Fame, they’d become so angry that they might go pillage England themselves. That’s right folks; this week we honor former WWF superstar The Berzerker! HUSS! HUSS!! HUSS!!!

John Nord, the man behind the horns, was born in 1955 in St. Cloud, MN. Now, I don’t know if you guys know this, but when you’re 6’6″, 323 lbs and from Minnesota, and you grow up in the 1970s, pretty much your only choices for professions were to be a bouncer at Grandma B’s in Minneapolis, or be a professional wrestler. Luckily for us, Nord did both. Not to get sidetracked, have you seen the list of people who bounced at this place at one time or another? It goes like this: “Ravishing” Rick Rude, Hawk and Animal of Road Warriors fame, Barry Darsow (aka BGHOF member The Repo Man), Scott Norton, Nord and more. Jesus!

Anyway, Nord got his start wrestling in Mid-South Wrestling 1984 as The Barbarian (not to be confused with former WWE and WCW superstar, The Barbarian portrayed by Sione Vailahi), but went north to the AWA in 1985, where he wrestled as Nord the Barbarian. There, he often teamed with legendary big man Frank “Bruiser” Brody – a guy that Nord seemed to really base his characters after in his later career. The Barbarian gimmick next took him to WCCW in Texas, where he wrestled for Fritz Von Erich until from about 1987 until 1989. He ended up back in the AWA after that, but this time under a lumberjack gimmick, and the name Yukon John. In 1990, he began teaming with fellow lumberjack, and former bouncer buddy, Scott Norton (they apparently really liked flapjacks).

After a short stint with Pacific Northwest Wrestling, Nord signed with the WWF, where he soon debuted under basically the same barbarian type gimmick he had used previously in his career, but turned up a notch. Instead of a barbarian, Nord was playing a straight-up Viking. OK so it was like a cartoon Viking, really. OK like a cartoon Viking with some kind of developmental disability and the fashion sense of a 21-year old girl of questionable reputation. Nord, who used the ring name “The Viking” at first (in case you couldn’t tell by the horns and sword that he was a fucking Viking), wore furry, knee-high boots and a top that really could only be described as one of those “sexy viking” costumes girls wear when they want to dress provocatively on Halloween. It was brown (sometimes blue), had cut out arms, was belted at the waist and went to just below his butt cheeks. I don’t even see the ladies on Vikings dressed like Nord was, let alone the actual warriors. I haven’t seen Ragnar wearing a booty dress when he’s pillaging the French countryside, have you? Nord also carried around a shield and sword, you know, in case an 11th century war broke out.

Nord was soon given a name change and, now as The Berzerker (actually a way better name, as it is inspired by the Norse warriors known as Berserkers), he was managed by that dastardly Mr. Fuji. If you don’t know Mr. Fuji, he was a former superstar as a member of an evil Japanese tag team with Professor Toru Tanaka in the 1970s, but had since retired and become an evil Japanese manager (it should be noted that his real name is Harry, and he was from Hawaii). His list of clientelle included, at one time or another, Demolition, The Powers of Pain, Crush, Yokozuna and the Orient Express. Anyway, the weird part about The Berzerker was that he was basiclaly billed like any other typical foreign monster heel. He needed Fuji as his handler because he didn’t really understand the rules of wrestling, couldn’t really talk and resorted to yelling “HUSS!!” over and over again (something Bruiser Brody was famous for) and was basically utterly uncontrolable. Fuji’s job was to, in storyline purposes, rile him up and send him to the ring to ransack his opponents, and then try to reign him back in once the dust had settled.

The Berzerker feuded with “Superfly” Jimmy Snuka and The British Bulldog early on, but his coolest/best clash came against the Undertaker. First of all, both of these guys were huge and athletic. Secondly, both were that similar type of uncontrollable monster who needed handlers. Finally, they did cool things with each other, like when the Berzerker tried to stab the Undertaker with his real sword (good timing by both men saved the day on that one). Even though the Berzerker eventually challenged Bret Hart for the WWF title, the sword thing with the Undertaker was by far his highlight, in my opinion. Nord would be gone from the WWF in 1993 after helping a fellow wrestler, Nailz, real life attack Vince McMahon over missed pay, which you can read about in last week’s BGHOF post.

I’m sure this doesn’t sound so bad, but here’s the thing about the Berzerker gimmick. A gimmick like that works when someone is booked as a wild man from the jungle (like The Wild Samoans, Kamala or Umaga), because, especially in the politically incorrect world of early 1990s WWF, people believed that you could go to deepest, darkest, where ever and find uncivilized monsters that could be trained to fight. Even the concept of the Berzerker being based on the Norse warriors is cool. The real life Berserkers were total badasses that fought basically in a trance (some believe they took hallucinogenic mushrooms before battle), and killed everything in sight. However, if you expect people in the 1990s to take a Viking guy seriously as a wrestler, then you’re an idiot. Vikings aren’t real, at least not in the last thousand years or so. Are we to believe that this guy somehow was raised as a Viking in the 1970s by his Scandinavian parents? Did he somehow get brought through a time warp to 1990? If so, did Fuji bring him over? How did he get the money together for that kind of operation?

Nord would end up wrestling in Japan for three years, and eventually in WCW under his real name. He never did much in WCW though, although he did lose to Goldberg as part of that winning streak of his. Shortly thereafter, Nord left WCW and hasn’t really been heard from on the mainstream wrestling scene since. He had himself a pretty nice career though, which I’m sure is capped by the fact that he’s now in the Jobu’s Rum Bad Gimmick Hall of Fame. Congratulations, Berzerker! HUSS! HUSS!! HUSS!!!