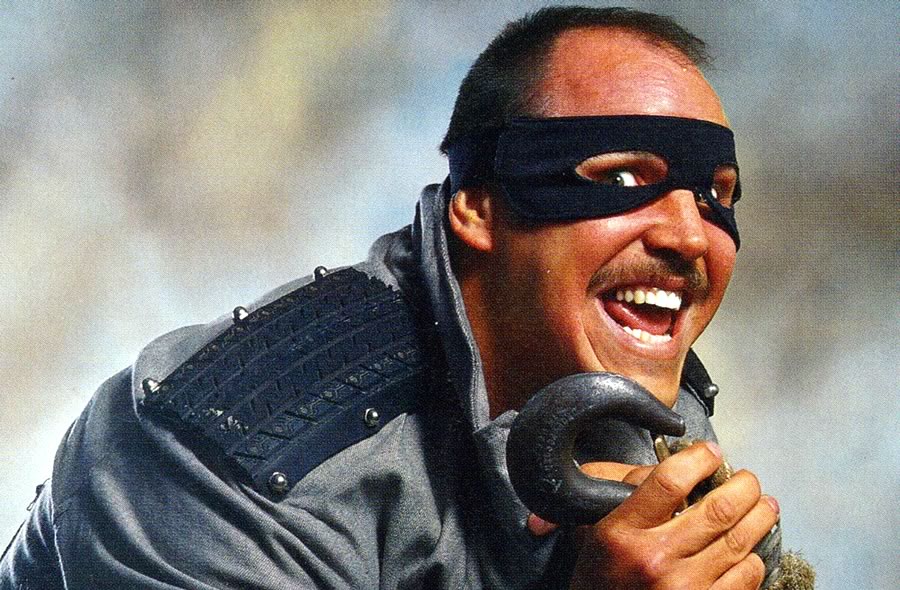 Professional wrestling is, and always has been, a character driven business. Like any other entertainment entity, physical talents can only take you so far if you don’t have a personality to go with it. Nowadays in pro wrestling, characters tend to me mere extensions of the person portraying them. Back in the late 1980s and early 1990s, especially in the WWF, this wasn’t the case. Characters were often cartoonish and wacky, like a lovable garbage man or the whatever the hell this minotaur thing is. This might be terrible for entertainment, but it’s great for the Bad Gimmick Hall of Fame. This was a series I originally started on the Camel Clutch Blog, but I’ve brought it home to Jobu’s Rum. Today, we induct The Repo Man.

We’ll start, as always, with the man behind the crap, Minneapolis, Minnesota native Barry Darsow. Like any good Minnesota boy, Darsow was exposed to wrestling early, and even went to high school with eventual pro wrestling greats “Ravishing” Rick Rude, “Mr. Perfect” Curt Hennig, Brady Boone, Tom Zenk, John Nord (The Berzerker), and Scott Simpson (Nikita Koloff). Pretty ridiculous, right? Darsow even bounced at a local bar with some of those guys, as well as a young Animal and Hawk of Roadwarriors/Legion of Doom fame. I bet not a lot of people messed around at that place. Yikes.

Anyway, Darsow eventually turned to pro wrestling and, after a few years of honing his craft, he took on the gimmick of Crusher Darsow – a Russian sympathizing traitor – in the early 80s. When he changed his name to Krusher Kruschev, he made a real name for himself in Mid-South Wrestling. He had a great run working with Ivan Koloff and his former classmate Nikita Koloff, which eventually got him noticed by Vince McMahon, who brought him North to the WWF. I guess Vince had too many Russian bad guys on board, because Darsow was repackaged as one half of Demolition, a tough, studded leather wearing, face painting duo that was meant to be the WWF’s answer to Darsow’s former bar coworkers, The Road Warriors. Demolition had a huge run with the company, thrice tasting Tag Team Championship Gold, but Bill Eady, who portrayed Darsow’s tag team partner, Ax, began having health problems in 1990. The WWF added a third member, Crush (portrayed by Bryan Adams) to try to save Demolition, but the writing was on the wall. Darsow had to find himself another gimmick.

That was a bad time to be repackaged in the WWF, because it seems Vince McMahon had discovered LSD right about that time. The hopped up chairman of the WWF came up with the brilliant idea to turn Darsow into a sneaky, tow rope carrying, Beagle Boys from DuckTales mask wearing creep that went around repossessing people’s cars, homes or whatever they couldn’t afford to make payments on anymore. Did I mention that his gray overcoat had tire tracks all over it? Because, I guess people ran him over when he tried to take their cars… or he was just really irresponsible with his coat, it’s hard to say.

I mean, this is really botom of the barrell type stuff here, right? As ridiculous as Duke “The Dumpster” Droese was, at least he was a regular garbage man who wrestled. Sure, you wondered why he came to the arena and wrestled in his professional sanitation worker uniform, and why he was carrying the garbage can (did Vince make him actually work as a custodian back stage while he waited to wrestle?), but whatever. One can suspend disbelief long enough to cheer for that kind of working fellow. The Repo Man was just absurd. Yes, repo men are real people. Most of us have watched those trashy Lizard Lick Towing shows on TV. As scripted and terrible as those are, at least none of those guys wears a Zorro mask. A friggin’ Zorro mask! If this guy ever went on a repo job wearing the outfit he wore to the ring, he’d probably end up pelted with rocks before he even made it halfway down the street. Somehow, this gimmick lasted until 1993, although it never really got over with fans and was quickly relegated to the much lower profile WWE shows. Darsow did appear in the 1992 Royal Rumble as Repo Man, sneaking back into the match after he was eliminated (he was so sneaky!), as well as in an 8-man tag match at Wrestlemania VIII, but that’s about it from him. Nice couple of pay days though, I’m sure.

Suffice to say, Darsow never came close to the heights he reached as Smash, or even as Kruschev in Mid-South. He eventually went to WCW as the Blacktop Bully from 1994-1995, and as Stewart Pain from 1996-1997. In case you’re wondering, yes; Stewart Pain was an evil golfer who would offer his opponents a chance to sink a putt for an automatic win against him, and his name was a take-off from former professional golfer, the late Payne Stewart. Even more ridiculous, this was during the rise of the NWO. What a weird transitional period for WCW.

Anyway, Darsow is 55 now, and was still donning most of his gimmicks on the independent scene, including that of The Repo Man, as of a few years ago. I’m not really sure why he would ever wrestle as The Repo Man again, when he has Smash to fall back on, but hey; it’s his world. I just thank him for his years of entertainment and wish him all the best. Welcome to the BGHOF, Repo Man!