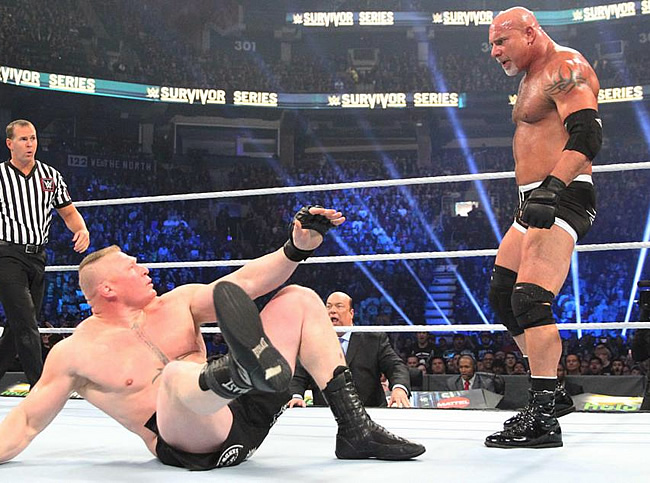 Whether you loved it or hated it, the end of this year’s Survivor Series main event between 49-year-old Bill Goldberg and 39-year-old Brock Lesnar has everyone talking. After a couple of days, and amid the post-Monday Night Raw announcement about Goldberg’s immediate WWE future, let’s talk about the squash heard ’round the world.

For those of you who didn’t watch, here’s a quick recap of what happened. Goldberg came back to WWE on October 17, and basically challenged Brock Lesnar to a rematch from their Wrestlemania 20 match… from 12 years ago. I shared my thoughts on Goldberg’s big debut a couple of days later, but I’ll sum it up for you: I thought it was awesome.

Over the next month, the two veterans threatened to do various bits of harm to each other, and even had a couple of pull-apart brawls on RAW to boot. Goldberg kept telling Lesnar he wasn’t just next, he was last. Lesnar, with the aid of his malignant mouthpiece, Paul Heyman, threatened to take Goldberg on an all expenses paid trip to his favorite vacation destination, Suplex City. It wasn’t always booked wonderfully, but Goldberg and Lesnar are big enough names–and come on, it’s Goldberg!–that they were able to carry the feud and actually build up a lot of interest.

Anywho, all of that buildup brought us to Sunday’s main event, when the two behemoths finally clashed. We knew it would be big. We knew worlds would move when they came together. We knew the match would be unlike any clash we’d seen in quite some time.

The thing is… it was!

After the introductions, and the bell, Lesnar charged into Goldberg like one would a blocking sled at an NFL practice, pushing the former Atlanta Falcon into the corner. Goldberg paused for a moment and unleashed a two-handed shove that sent Lesnar sprawling to the canvas. Lesnar looked up in disbelief, as slight smile creeping onto his face… he knew the old man was ready for a fight

What Lesnar didn’t realize was that Goldberg was ready for much more than that. The former owner of the original “streak” waited for Lesnar to turn his body slightly as he stood up and exploded into the former Minnesota Golden Gopher with the most hellacious spear we’ve seen since Goldberg retired from the ring in 2004 (sorry, Roman Reigns). Goldberg wasn’t done, though. He stalked Lesnar,who was on the ground doubled over in pain as if his insides had liquified. When Lesnar got up, Goldberg speared him again.

The crowd went wild as they began to realize what was about to happen. Lesnar, who cemented his legacy by executing the shock of the century at Wrestlemania 30 against The Undertaker, was about to fall victim to a shocking upset of his own. Goldberg signaled for the finisher and again waited for Lesnar to get up. When Lesnar stood up, Goldberg picked up the 286 lber, hoisted him to the sky and came down on top of him with the Jackhammer.

Yep. The rematch of the decade ended in less than two minutes, and the internet exploded after the final bell. People loved it! People hated it! It was the best thing ever! It was the worst thing ever! It was just WWE trying to get Twitter going! It was genius! It was stupid! It makes Lesnar look weak and wastes the last three years of character buildup!

I think you get it. People had something to say about it. I’m pretty sure the talk hasn’t even stopped yet.

Personally, I was a bit torn at first, which is why I hesitated to write about it. I wanted to wait to see how WWE would handle the story on RAW. I was hoping Lesnar would show up completely unhinged and destroy everything in his path, like he did on the Raw after losing his title at Wrestlemania 31. We didn’t get Lesnar at all, but we did get something that made the ending of Survivor series make a lot more sense.

Goldberg came out and made a huge announcement. Originally, his match against Lesnar was billed as a one time comeback so that Goldberg’s son and new wife could see what made him such a big star during the attitude era. Instead, the Tulsa, Oklahoma native announced that he was officially throwing his name into the ring for the Royal Rumble.

Ah ha! Now this is starting to make more sense. They needed Goldberg to win so that he could look strong and draw some money at the Royal Rumble. What better way to make him look strong than to have him beat “the man who put the 1 in 21-1? (at the time)” When you add to that the fact that Goldberg allegedly had legitimately tweaked his shoulder on Raw a couple of weeks prior to Survivor Series and his ability to work a lengthy match was in question, and the result makes even more sense.

To those that say Lesnar getting beaten that quickly would ruin his character and cause his reputation as a total badass to evaporate into thin air, I say take a look at his UFC career. Lesnar lost his second career fight to Frank Mir in 1:30. He won the UFC heavyweight championship two fights later. After two successful defenses, he lost it to Cain Velasquez in just 4:12. The next fight after that was also a loss, this time in 2:26 to Alistair Overeem. Did any of those ruin his ability to draw money? He didn’t fight again for five years after Overeem, and still drew a ton of money for his comeback win–albeit a PED tainted win–against Mark Hunt in July at UFC 200.

The lesson here is that anyone can come in cocky and get caught off guard by a competitor for a shocking loss. Did anyone see Rocky III? Clubber Lang crushed Rocky at the beginning of the film. Also, Marty McFly, our favorite time-traveling teen got his ass kicked a couple of times by Biff, Griff and Buford “Mad Dog” Tannen in the various Back to the Future movies. Hell, Elle Woods got her heart broken by her jerk boyfriend at the beginning of Legally Blonde.

Did anyone think those characters were done for good? Did anyone think Rocky wouldn’t win the rematch? How about Marty, did anyone think he wouldn’t eventually end up back in 1985 with Biff washing his truck? Did you really think Elle wouldn’t end up going to Harvard Law School, winning the big case and having her ex-boyfriend begging her to take him back? No. Nobody thought that. Just like nobody thinks Brock Lesnar will never rise again.

As Smackdown’s newest superstar James Ellsworth always says, and has proven with his three victories over WWE Champion A.J. Styles, any man with two hands has a fighting chance. When that man is Goldberg, no matter how old he is, that chance is significantly bigger. All Brock Lesnar and Paul Heyman have to say next time either one of them is on Raw is that Goldberg got lucky. They can say Lesnar took him too lightly… but he won’t next time.

Next time, you ask? Oh yeah. I fully expect Goldberg’s Royal Rumble appearance to somehow be marred by the Beast Incarnate, leading for the ultimate blowoff, and Lesnar’s revenge, at Wrestlemania 33.

You guys see now? Everybody wins. Nostalgic fans get to see Goldberg look strong one last time before he ultimately rides into the sunset with his shoulders on the mat in April. Lesnar fans get to see their bad ass rise again. And now, the door is open for someone else to come in and legitimately challenge Lesnar… because he might just lose again.