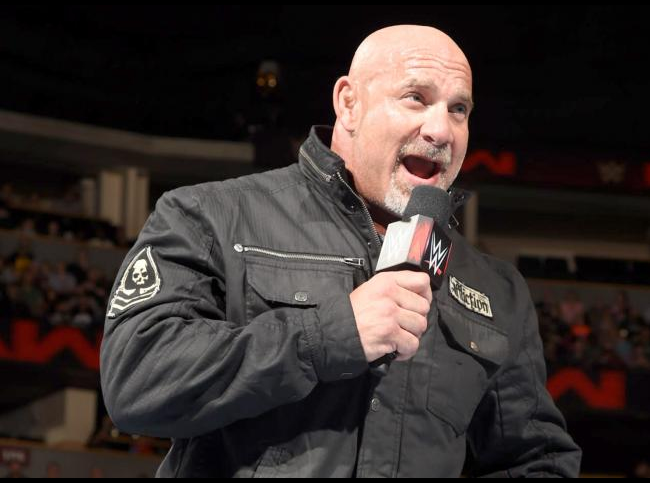 The smoke was exhaled.

Goldberg was coming to the ring.

No, I’m not remembering my favorite moments from the Monday Night Wars series on the WWE Network (only $9.99). I’m talking about something that happened this past Monday night! That’s right, our favorite bad ass, Bill Goldberg, made his triumphant return to Monday Night Raw this week to accept a challenge from Brock Lesnar and Paul Heyman. Should it have happened?

WHO’S NEXT?? @Goldberg returns to @WWE #RAW after a 12-year absence!! What will his answer be for @BrockLesnar and @HeymanHustle? pic.twitter.com/Ciy5F73m3H

Tell me that didn’t take you back to 1998. Did you see that crowd reaction? Did you get the goosebumps? If you didn’t, check your vitals… you in trouble.

Although Goldberg looks a little older, the 49-year-old is still in great shape, and looking as kickass as ever. He didn’t skip a beat in his entrance, and the crowd ate it up. I definitely marked out for this entrance too, but a compelling match one entrance does not make. WWE has actually been doing a decent job of building this match up to seem important.

It all started on ESPN two weeks ago, when Goldberg was on with Jonathan Coachman to discuss the rumors of his impending return to WWE. Coachman–doing his part to build this return–asked Goldberg about the rumors, and even who his dream match would be against. Goldberg mentioned that he wouldn’t mind giving fans a rematch of Wrestlemania 20, when defeated the one and only Brock Lesnar. Last week on RAW, Paul Heyman came out to the ring to officially lay down the challenge. Earlier on this week’s RAW, Heyman had laid out a final warning to Goldberg, which led to the former Atlanta Falcon saying, among other things, this:

“@BrockLesnar, not only does that mean YOU’RE NEXT … more importantly, it means BROCK LESNAR, YOU’RE LAST!” – @Goldberg #RAW pic.twitter.com/9ooRIHSvLi

Welp. I’m in. Do you need anything other than that closing line? You’re next… and you’re last? Wowsers.

Fortunately, there’s more than just a catchphrase. In case you’re wondering why Goldberg even wants to do this, WWE picked the simplest reason. On top of the whole dream rematch thing, Goldberg said that neither his son, nor his wife, have ever seen him wrestle before, and he wants to come back one more time to basically show his family what he does best, and to be a hero all kids out there… one last time. They even showed his wife practically in tears after he was done accepting the challenge.

Goldberg himself was clearly emotional as well. Much like when Shane McMahon returned after a seven-year hiatus in February, you could see that Goldberg was truly moved by the crowd reaction. Even after twelve years completely away from the ring, they hadn’t forgotten him, and it clearly meant a lot to the former WCW champ.

All of that added up made for some really good TV.

Was I a big fan of Michael Cole calling Goldberg “the greatest champion in WCW history?” Of course not, but that’s just Vince McMahon being Vince McMahon in his attempt to oversell this match. Hopefully, moving forward, they just let this match sell itself. I think Golberg, Lesnar and Heyman can do a heck of a job promoting it without insulting any other legends, or the intelligence of the WWE fans.

Although it hasn’t been officially announced, it looks like this match will be taking place at Survivor Series. I, for one, can’t wait to see it. Will Lesnar avenge his loss? Will Goldberg retire on top once again? We’ll have to wait and see.