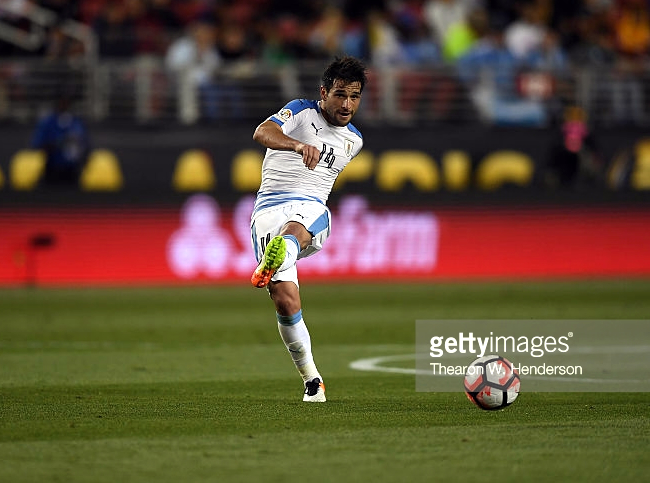 It’s been a while since we’ve done one of these, but a bit of news has made it necessary for us to bring back our vaunted Get to Know A Uruguayan series. Seattle Sounders FC have added two of my fellow countrymen! The first is Alvaro “Flaco” Fernandez, whom we all got to know about five years ago. The second is the subject of today’s GTKAU. Let’s all get to know Uruguyana midfielder, Nicolas Lodeiro!

If you’re a fan of the Uruguayan national team like I am (Arríba la Celeste!!), then you know full well who Nico is. You also know damn well what we thought he might one day become. Unfortunately, those two visions have gotten further and further apart as the years have passed, but hey, maybe Nico has found himself a league in which he can finally shine after this transfer.

How did we get here? Well, like many great Uruguayan players before him, Nico got his start playing for the best, and oldest (suck it, Peñarol) team in Uruguay, Club Nacional de Fútbol (Nacional if you’re nasty). My brother, El Bolso, has been regaling you with tales of the legendary franchise for a couple of years now, so you should be quite familiar with the club’s pedigree, as well as it’s reputation for bringing international superstars into the world of fútbol.

Lodeiro made his Nacional debut as an 18-year-old on August 19, 2007 (happy birthday to me), and started really generating buzz during the 2009 Copa Libertadores, during which he scored three goals and played extremely well overall. He also scored the championship-winning goal in the 2009 Uruguayan League (you can read all about that in El Bolso’s last History of Nacional post). Needless to say, Lodeiro put himself on the map that season.

His growing status received another boost in during the next season, when he was sold to AFC Ajax of the dutch Eredivisie–a squad that also happened to be the home of another Uruguayan who got his start at Nacional, and the winner of the Jobu’s Rum Best God Damn Player in the World Award (there will never be another winner because there can be only one), Luis Suárez.

Unfortunately, Lodeiro’s career stalled a bit once he got to Europe. European football really is the ultimate testing ground for international stars, and Lodeiro showed the world he wasn’t going to be the next Suarez after all. An injury during the 2010 World Cup kept him out of action for basically his first entire season on “de Godenzonen (Sons of the Gods).” The next season, he finally made it back onto the pitch, helping Ajax during the Champions League, as well as the 30th Eredivisie title in the club’s much-heralded history.

Unfortunately, Nico’s time in Europe would soon come to an end. In 2012, he was signed to Botafogo de Futebol e Regatas (Botafogo for short) of the Campeonato Brasileiro Série A (Brazil’s top tier league). He helped Botafogo to the league title in 2013, and also qualified them for the 2014 Copa Libertadores–the first for the club in 18 seasons. The Year after that, he signed on to play for Sport Club Corinthians Paulista (Corinthians for short), where he spent one season before joining Argentine powerhouse Club Atlético Boca Juniors last season. Lodeiro again tasted a trophy, helping Boca (the former home of Maradona, among others) to a domestic double, including the league cup. They also made it all the way to the semis of the Copa Libertadores, where they lost to Independiente del Valle of Ecuador.

Internationally speaking, Lodeiro has an extensive resume. Sure, he never became the next Suárez, and will never be accused of bringing Uruguay back to international prowess, but you can’t discount the experience he’s accrued since making his debut for La Celeste in 2009. He’s played in two World Cups (2010 and 2014) and three Copa Americas (2011, 2015 and 2016) and has also represented the sky blue in a U20 World Cup (2009) and at the 2012 Olympics. In all, he has earned 42 caps for Uruguay and scored 3 goals as a midfielder. Not too shabby for the kid.

It appears the Sounders had been trying to get a transfer done for Lodeiro for the last seven months or so, but money was seemingly the only obstacle keeping Nico out of the Emerald City. The Sounders finally got their man, and Lodeiro for sure finally got his pay day. The $6.5 Million transfer fee is among the highest ever for Major League Soccer. In fact, only Michael Bradley ($10 Million in 2014), Clint Dempsey ($9 Million in 2013), Jermain Defoe ($7.2 million in 2014) and Giovani Dos Santos ($7 Million in 2015) have ever cost an MLS team more to acquire. On top of that, Lodeiro will earn $6.1 Million over the next 3.5 years, which gives him the 15th highest salary in the league right now.

Lodeiro didn’t agree to this transfer for the money, though. He agreed to the transfer for a shit load of money! All kidding aside, this is a significant financial commitment for Seattle, which is currently languishing in ninth place in the Western Conference. For a team that is expected to compete for a championship every season (even if they usually bow out disappointingly early in the playoffs), this performance simply won’t do. The Sounders needed to make a splash, and they also needed to replace Obafemi Martins, who left Seattle for a shit-load of Chinese money prior to this season. With Lodeiro, GM Garth Lagerway thinks he has his man.

In case you’re curious, Lodeiro made his Sounders FC debut earlier today in a 1-1 draw against the third place L.A. Galaxy. He played all 90 minutes and shined in what was a good result for the struggling Sounders. It will be interesting to see how this signing pans out. Will Lodeiro inspire the Sounders to turn it around and make the playoffs this season, or will he be a brand name player in his prime around whom the Sounders can build for the future? Only time will tell. For now, vamos arríba Nico! Welcome to MLS.

Update: He seems to be getting along just fine so far.