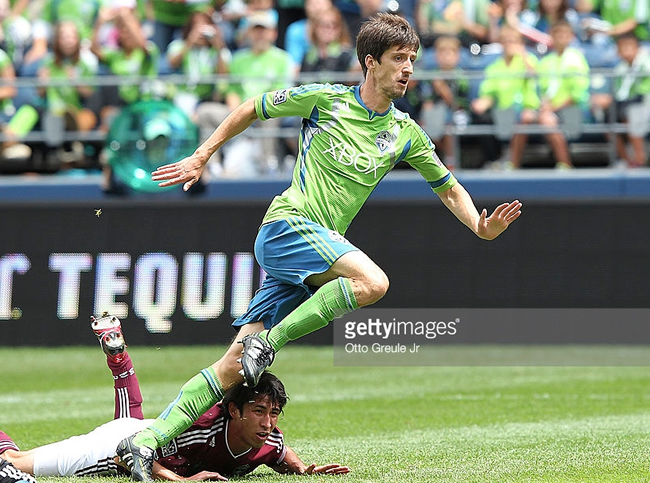 Update, July 31, 2016: The Seattle sounders have brought Fernández back into the mix, signing him on July 27, 2016, along with fellow Uruguayan Nicolas Lodeiro. Continue reading about Flaco below, and read all about Lodeiro here.

We haven’t done this in about a month, so I figured it was time to spread some more of my culture on your breakfast toast (if that sounds dirty to you, the problem is you, not the words). As usual, the Uruguayan in question today is a fútbol player. Fortunately for you guys, it’s someone who is actually accessible to American fans as well. His name is Álvaro Fernández, but you Seattle Sounders fans might know him like I do, as “Flaco.” Flaco (nicknamed that because he’s pretty tall and skinny) is important to know, because he currently tops the Castrol Index, which is used to determine the best overall player in the MLS. How about that?

In case you’re wondering, here’s a link to how the Castrol Index works (who knows fútbol better than the good people at Castrol?). It is a way to track who is the most valuable player on the field at all times. Naturally this award goes to a Uruguayan, because we’re a tremendous people, but there’s more to Flaco than a number. Anyway, onto the meat and potatoes of it all.

Fernandez is a twenty-five year old midfielder from Villa Soriano, Uruguay. He started his career as a member of Club Atenas de San Carlos, a Uruguayan 2nd division team, but was signed to the first division Montevideo Wanderers after just one year there. After one year on the Wanderers, he played a year in Mexico for Club de Fútbol Puebla, before returning to Uruguay to play for the first division powerhouse Nacional. The next two years, he was loaned out to Vitória of Portugal and Universidad de Chile (from… Chile…duh), before finally landing in the “Emerald City” (thank the citizens of Seattle in 1981 for that nickname) in July of 2010.

I actually had the pleasure of seeing Álvaro play in person in one of his earlier games in Seattle, when the Sounders played the New England Revolution at Foxboro Stadium that September. While he played well, nothing he really did in 2010 made me think he would have such an impact on the Sounders in 2011. Nothing he really did on the international circuit would make you think he’d be this good either. It’s not that Álvaro didn’t play well, It’s just tough to find playing time on a team as deep as the suddenly powerful Uruguayan national squad. Fernández was on the fourth place 2010 Uruguayan World Cup team, playing in six of the qualifying matches and four of the World Cup finals matches, but mostly entered games as a sub.

This year has been a very pleasant surprise indeed, and I am glad to see another of our boys doing well, especially one playing within my current borders. I look forward to seeing if he can finish atop the Castrol Index, and bring even more good press to Uruguay in what has been an amazing couple of years for the nation’s fútbol program.