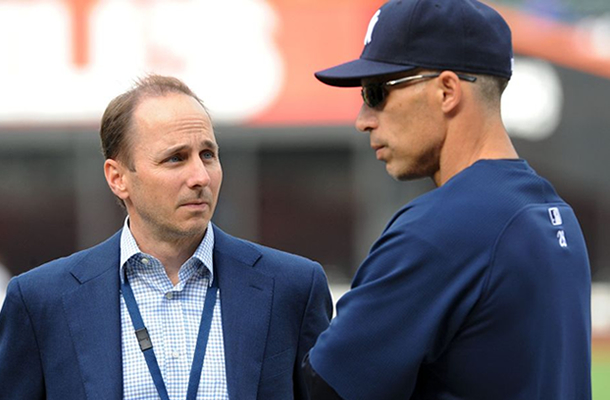 I’ve been avoiding writing about the Yankees for about two months now. Sure, there was that fun piece I did about Brian Cashman and Clark Griswold, but that’s really been about it. I’m definitely not a fairweather fan or anything, but when the Yankees aren’t playing well, I tend to find other things to write about. Do you guys really want to hear me rant, rave and cry about how terrible the Yankees are, or would you rather I just cover the World Cup for a month? Anyway, there’s no more World Cup, and our site is back up and fully running after a week spent switching hositng servers (note the new URL), so I guess let’s start talking about the Yankees again. Can they make the playoffs this year?

A lot has happened since I’ve been gone. The Yankees have a couple of new faces, and a couple of more pitchers got hurt. What else is new, right? What does the Yankees Roster look like now? Let’s take a quick look.

Brett Gardner has really emerged as the team’s best offensive player, and my choice for Team MVP in 2015. Gardy has been hitting the cover off of the baseball of late especially, and has seen his numbers grow to a hefty .283 with 15 homers and 50 RBI from the leadoff spot. Gardner has already nearly doubled his previous high home run total (8 in 2013), and is just 2 RBI shy of his career high in that. The .284 average would also be a career high (not counting the .323 in his 16 game 2012 campaign), as would his .824 OPS. I think he also has a chance to eclipse his career high in runs score and hits, but that remains to be seen. During the off-season, the Yankees put their faith in Gardner with a 4-year, $52 MM contract that raised some eyebrows, but he is proving himself more than worth the money. Amazing.

OK now let’s talk about those new faces I promised you. Half of the Yankees starting infield (and most of their backup infielders) from April are gone. Brian Roberts has been DFA’ed, Kelly Johnson was traded to the Red Sox for Stephen Drew, Yangervis Solarte was dealt to San Diego for Chase Headley, and the Yanks have gotten rid of the Zelous Wheelers and Dean Annas of the world. I mentioned a couple of the replacements already, as Stephen Drew is the new starting 2B and Chase Headley has taken over at third base. In the Outfield, Alfonso Soriano is gone, and Ichiro is no longer an everyday player. They have been replaced by another big recent addition to this lineup, Martin Prado, whom the Yankees acquired on deadline day for minor league prospect Peter O’Brien.

All this lineup turnover seems to have sparked some life into Carlos Beltran and Brian McCann as well, as they have been playing a lot better. Overall, however, the Yankees are still struggling on offense. They are clearly better than they were a month or two ago, but they still need improvement.

Oh boy. This is where things get crazy. At the beginning of the season, the Yankees had a starting five of CC Sabathia, Hiroki Kuroda, Masahiro Tanaka, Iván Nova and Michael Pineda. Only Kuroda remains standing. Sabathia was terrible before thankfully finding a degenerative knee condition on which he had season-ending surgery, Tanaka is trying desperately to avoid Tommy John surgery right now, Nova couldn’t avoid Tommy John and has been out since very early and Pineda is made of tissue paper. They were replaced in the rotation by guys like David Phelps, Vidal Nuño, Shane Greene and Chase Whitley, which also didn’t quite work out. Phelps recently went on the DL with some inflammation and Nuño was traded for Brandon McCarthy. Somewhere along the line, the Yankees also picked up Chris Capuano, who is now also in the rotation. Don’t forget Esmil Rogers, who might be taking Phelps’ place in the rotation. Everybody got all that? Sheesh.

The biggest surprise, other than all of the injuries, has been the emergence of Brandon McCarthy. Nuño was mostly garbage while on the Yankees, pitching to a 2-5 record and a 5.42 ERA. I’m sure the DBacks thought nothing of flipping McCarthy to the Yankees, because he was 3-10 with a 5.01 ERA in the desert. Since the trade, McCarthy has been a revelation, pitching to a 4-0 record and a minute 2.08 ERA. It has been pretty unbelievable. The rest of the fill-ins performed pretty much like you would expect a rookie fill-in to perform. Whitley started out great, but eventually the league adjusted and he was replaced in the rotation by Capuano, who has pitched well enough to win twice, but hasn’t won (the story of the season, if you ask me). Greene has been solid, but has also had his rookie struggles.

The Yankees might have to make a move to replace Phelps, but it appears Pineda is almost ready to come back soon. He last pitched 3.1 shutout innings in a rehab start, so, assuming his muscles don’t desintegrate, we might see him in the Bronx again soon. Tanaka has twice thrown catch with no problems, although it’s still isn’t enough to say that he’ll be able to return this year, is at least encouraging. If the Yankees can hang around, and those two guys come back, they might be able to make the post-season.

This has been the one shining light for the Yankees this year. David Robertson has been a rock in replacing the great Mariano Rivera, and Dellin Betances has emerged as the new big weapon for Joe Girardi. Guys like Adam Warren and Sean Kelley have been terrific overall too, so the games are pretty set if the starters can go six or seven innings. That has been a big problem for the Yankees, which means guys like David Huff, Matt Daley, Jeff Francis (released), Matt Thornton (claimed by Washington), Esmil Rogers, Whitley, Chris Leroux, Wade Leblanc, Rich Hill, Bruce Billings, Jose Ramirez, Cesar Cabral (released), Alfredo Aceves (released), and Jim Miller have seen some work out of the yankees pen. I like the job Huff has done as the long man, but everyone else is pretty much garbage. I really hope the Yankees start calling up some younger bullpen arms soon, because if someone’s gonna suck in mop up duty, it might as well be a kid.

So, Can they Make It?

That’s the big question. The offense has been better, but has still struggled mightily overall. The Rotation is holding together with rubber bands and tinfoil, but the team can’t possibly keep winning more often than they lose if they have to carry all of these guys for much longer. The fact of the matter is that they are only one game behind the Blue Jays for that second spot. That’s not an insurmountable lead, especially the way the Jays are playing lately. That being said, I feel like the Yankees, record is a lot of smoke and mirrors, and I just don’t know if this team can hold up. Just out of homerism, I’ll say they can make it, but it won’t be easy, and it won’t be without another Cashman move.