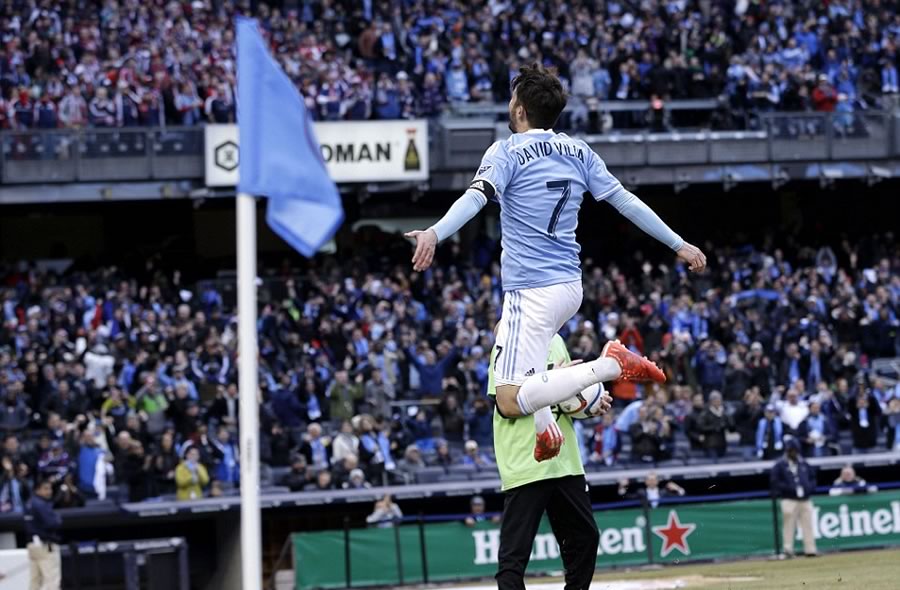 [dropcap]D[/dropcap]espite the questions about the field quality of Yankees Stadium heading into NYCFC’s home opening matchup against the New England Revolution, all the fans really cared about was whether or not their team would get their first win of the season on Sunday. Well, their number one superstar, David Villa, opened his scoring account, and NYCFC won 2-0 on a pitch that I thought looked pretty good. I guess everybody wins?

I do want to speak briefly about the whole field quality controversy, because it could potentially be a big deal. Basically, if you’re sharing a stadium with a franchise that plays a different sport, especially one that involves as much running as soccer does, maintaining the field is going to be difficult. That being said, Yankees president Randy Levine has been touting that the Yankees employ “the greatest grounds crew and stadium operations people in the world,” and they proved him right in getting this field ready for Sunday. It looked pristine and, despite the fact that it’s only 70 yards wide because the Yankees didn’t want to mess with their pitching mound (only slightly below average, as all MLS fields are between 70 and 75 yards wide), it played well too. Some players expressed that it could have been a little wetter, but that was the extend of the complaints. Maybe Mark Teixeira should take notes, and stop whining.

Anyway, let’s talk about the actual game now, shall we? NYCFC badly wanted to win this game. Not only because they had let a win slip away the previous week in Orlando, but because 43,507 people were at the stadium to see their team win their home opener. It took only 19 minutes for Villa to bring the crowd to its feet. Villa, the Spanish international with one of the best winning reputations in the sport, has won championships everywhere he has played. He has three La Liga titles under his belt (two with Barcelona and one with Atlético Madrid), one Champions League title (2010-11 with Barça), a World Cup championship (Spain, 2010) and a UEFA European championship (Spain, 2008). In the 19th minute of his second MLS game, he showed that championship form on a give-and-go with midfielder Ned Grabavoy. Villa split three defenders, received a nice pass from Grabavoy and shot over the keeper into the corner to give NYCFC a 1-0 lead. It was a thing of beauty, and one of hopefully many more to come during his time with the light blues. Check it out below.

New England, who lost 3-0 in their opening game to Seattle Sounders FC, never quite got it going in this one. They missed several opportunities early in the game, and were all but doomed in the 67th minute when defender Jose Goncalves was sent off after he earned a red card by tripping Khiry Shelton on a breakaway. It hasn’t been a good start for the Revs, although fans shouldn’t panic too much. They started last year terribly, and ended up in the MLS Cup finals. As a side note, it was also good to see Juan Agudelo back on an MLS pitch, or any professional soccer pitch for that matter. He didn’t impact the game all that much, but at least he played soccer for money.

Anyway, after the foul, NYCFC began pounding on the door of Bobby Shuttleworth‘s net. The New Engalnd keeper put up a valiant effort, but there wasn’t much he could do with one less teammate helping him out. In the 84th minute, Patrick Mullins, who had come into the game just a couple of minutes earlier, scored on his first touch and iced the game for the light blues. Mullins, who played for the Chicago Fire Juniors and played his college ball at Maryland, should be very familiar to Revs fans. The 23-year old New Orleans native was New England’s first round pick in the 2014 MLS SuperDraft, and had a very good showing during as a rookie in last year’s playoffs. He was left unprotected in the expansion draft, and NYCFC coach Jason Kreis jumped all over him. I’m sure the goal against his former mates was fun times for Mullins. It certainly was for NYCFC and its fans.

After the final whistle, NYCFC had its first home victory, and the realization that it has one of the brightest stars in the league in Villa, who assisted on Mullins’ goal in this game, and also on Mix‘s goal in the first game of the year. If Villa can keep his good form, and Kreis and his staff can figure out exactly who to put around him and how, NYCFC might be good enough to make the playoffs in its inaugural season. Considering Orlando City has all six points after a 1-0 win against Houston this weekend, expansion is looking like a good thing for MLS.

Check out Mullins’ goal too: