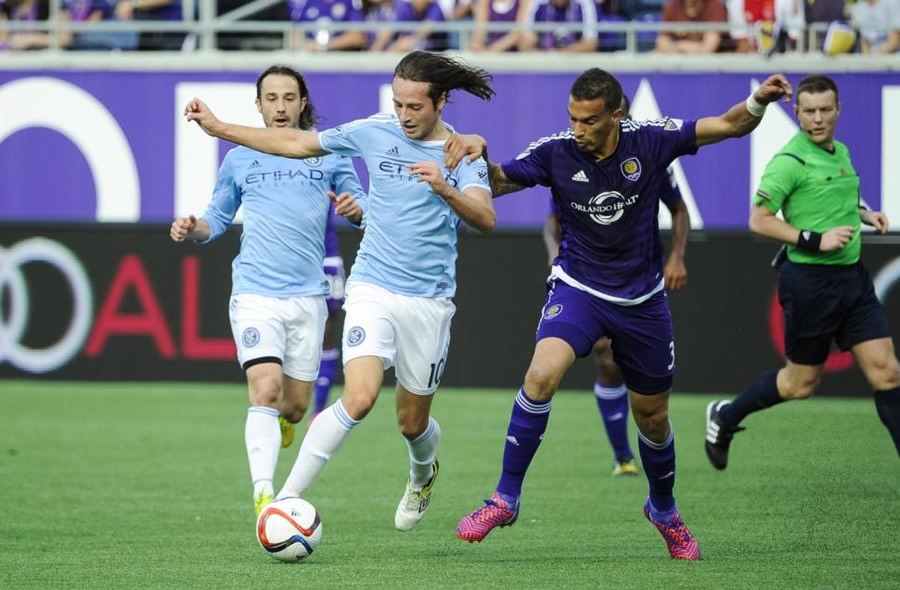 [dropcap]T[/dropcap]he MLS season kicked off over the weekend, which meant the debut of the league’s two new teams, Orlando City SC and NYCFC. Just to help us avoid confusion, the schedule cobblers saw fit to have these teams play each other in their first inaugural match ups. We got a game that took a while to develop, as you might expect from two expansion teams playing their first ever games, but an exciting finish saw Orlando, while a man down, tie it at 1-1 on a stoppage time free kick by international super star Kaká. Let’s take a look at some of the particulars.

First of all, kudos to the city of Orlando, because they really came out to support their new franchise on Sunday afternoon. The sellout crowd of 62,510 not only sold out the Citrus Bowl, it was also the biggest crowd to ever see a soccer game in the stadium, surpassing the previous records set during the 1994 World Cup. Kaká nearly thrilled the crowd with a blistering goal in the 38th minute, but NYCFC net minder Josh Saunders made a great stop.

The fact that Saunders was even in the game was pretty impressive, considering the knock he took in the 14th minute. He was undercut by Orlando City defender Seb Hines while jumping for a cross, and his momentum caused him to slam his back, and the back of his head, against the post. He was treated for a cut and a huge knot on his head, but allowed to stay in the game, which drew the ire of some commentors, who thought he might have had a concussion on the play. According to commissioner Don Garber, who was in the house, protocol was followed and Saunders stayed in. The cut opened up again late in the match, but it was quickly treated again and seemed fine, other than the big knot.

NYCFC took the lead in the 76th minute when Mix, whom we profiled last week, got the ball from David Villa just outside the box and and curved one through the defense and past Orlando keeper Donovan Ricketts. The shot was the only shot on target from NYCFC all game, but they made it count, taking the lead despite being mostly dominated all game long by Orlando. It was also nice to see the team’s two biggest stars combine for a goal. Hopefully we get a lot more of that in the coming months.

Victory looked all but sealed up for New York after that, especially once Orlando defender Aurélien Collin was red carded in the 83rd minute for a reckless tackle on Villa at the top of the box. Orlando kept fighting, however and, after a takedown just outside the box in the 91st, the great Brazilian Kaká stepped up to take the free kick. In a bit of bad luck for New York, the ball hit the line and was deflected into the net. It had been heading to the left side of the net (from the keeper’s perspective) and ended up trickling slowly into the right side of the net after the deflection. There was nothing Saunders could do, and the 62,510 Orlando faithful exploded with joy. Orlando had salvaged a point in their big debut.

This game wasn’t the prettiest I’ve ever seen, but NYCFC had a real chance to kick off their franchise with a big win in a hostile environment. Orlando, meanwhile, avoided a deflating loss with an exciting last minute comeback, which should keep people coming to the box office. I think NYCFC has a lot more to work on after this game than Orlando does, but things could have been worse for both squads. They should both be happy to have come out of this one with one point each, even though New York could have had three.

Up next for NYCFC is their home opener in the Bronx against New England on Sunday the 15th. Orlando, meanwhile, travel to Houston to take on the Dynamo on Friday the 13th. It should be interesting to see how these teams respond to their first games in MLS. Either way, welcome to the league!