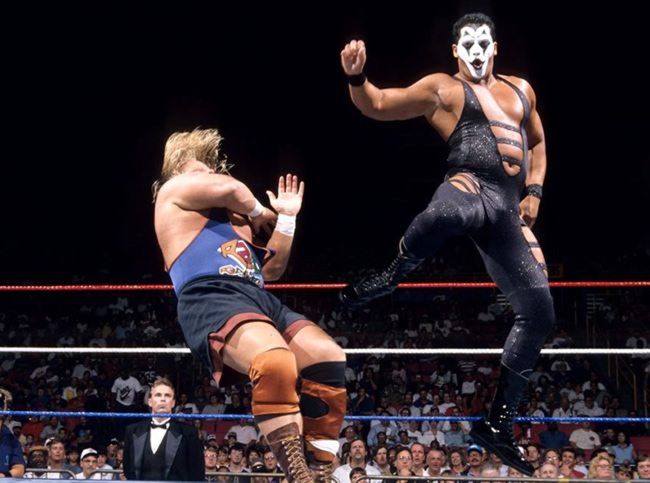 I’m going to start this post with the note I had written down for this gimmick on my big spreadsheet of bad gimmicks:

“Phantasio: face paint wearing magician whose finishing move was pulling people’s underwear out of their pants.”

That pretty much says it all, as far as justifying this Bad Gimmick Hall of Fame induction. 1995 was an era of absurd gimmicks in WWE, but I think this one takes the cake, probably from behind the ear of a small child. Welcome to the BGHOF, Phantasio!

The man behind the wand is Harry Del Rios, a body builder New York City, who was trained by the famous Johnny Rodz and Vito Lograsso. His first big break in wrestling came when he joined Jerry Lawler‘s USWA in Memphis in September of 1993. He wrestled as The Spellbinder, the precursor to the Phantasio gimmick he would use for the WWF. According to an interview Del Rios did with f4wonline.com in July of 2010, he then became the very first guy to get a WWF developmental deal.((the kind of deal where you get signed by the WWF, but sent elsewhere to hone your craft, like when a fútbol team loans out a young player so he can get more experience). While under WWF contract in Memphis, he continued to work on the Spellbinder gimmick, and eventually got the call to go North. You can see the birth of the Gimmick, from the USWA days below.

A little background to this gimmick. According to the same interview, Del Rios invented the gimmick himself. You see, he was a bit of an amateur magician growing up, and he combined his love of turning wands into bouquets of fake flowers, pulling birds out of his hat and making coins appear out of people’s ears, with his love of body building and a new-found love of professional wrestling to create a gimmick he says Vince McMahon “loved.” I don’t doubt this one bit. Whatever drug Vince was on back in the early 90s made him come up with dozens of nonsense gimmick ideas. It was only a matter of time before he thought of the wrestling magician gimmick himself (he already had a clown, so why not?), he just got lucky that Del Rios did it for him.

This brings us to Phantasio’s storied WWF career. According to Del Rios, he had a lengthy WWE career that lasted almost a year, but most of it was spent on the road and away from WWF television cameras. This is supported by the photo at the top of this article, which is not from his debut and only television matchup. His actual on-screen career lasted one match. On the July 16th, 1995 episode of Wrestling Challenge, Phantasio took on a jobber named Tony DeVito (you guys might know him better from his days in ECW as a member of Da Baldies). You can watch the video below, and then we’ll get into just how absurd it really is.

First of all, Phantasio has no theme music, but right away you get a mysterious vibe from the guy. He’s wearing what appear to be S&M tights, coat tails, a top hat and a plastic mask that is designed like mime makeup, and he’s eerily silent… I guess also like a mime. You could almost say he looks like the Crow version Sting a little bit… if The Crow Sting was a sad magician at children’s birthday parties. Anyway, he immediately flabbergasts the late, great Gorilla Monsoon by turning a little torch into a walking stick. Seriously, Monsoon practically shits his pants with amazement. Has he never been to a five-year old’s birthday party? The wonderment and magic continues from there, as Phantasio removes his top hat and, at his command, smoke shoots out of it and into the air. If Monsoon hasn’t shit his pants by now, this definitely does it. I can practically hear it through his headset, squirting down his leg. At this point, Phantasio, who is actually a pretty imposing figure, at a very muscular 6’4″ and 270 lbs, messes around with the plastic mask, removing it to reveal… mime facepaint! Oh, and a gross never ending ribbon that comes out of his mouth. Disgusting. Even more disgusting, he then goes to the outside of the ring and gives the mask, gross mouth ribbon and all, to a “lucky” little kid in the audience. I know he’s going for the Bret Hart “give the glasses to the kid” thing, but I’m pretty sure this would get you put on the sex offender list today, or at least on some CDC list somewhere.

OK so finally, the match begins as Phantasio and DeVito lock up and, for a while, Phantasio looks like he can move a little bit. His move set is limited, but he’s got a good build and pretty light on his feet for such a big guy. Then, after sending DeVito off the ropes, the magician reminds us all that he knows magic by throwing what I can only describe as a Spiderman web on DeVito out of nowhere. At this point, I think Monsoon’s feces are piling up to the point where he might need a snorkel soon. The old timer could not be more amazed. DeVito, by the way, basically gets the life scared out of him by this. It’s made of paper! Paper streamers! Sure, they came out of nowhere, and nobody expected it, but it’s paper. How is this a believable thing? What grown ass man gets scared of paper streamers? It wasn’t even one of those snakes in a can things. I could see being startled, but then, upon realizing it was just paper, I probably would have beaten the tar out of Phantasio. Instead, DeVito cowers and cries to the ref like a little bitch.

All of that, however, pales in comparison to the finish, which is one of the dumbest sequences I’ve ever seen inside a professional wrestling ring. Phantasio wears DeVito down with a couple of body slams before hitting a big atomic drop. This apparently jars DeVito’s underpants loose, because, and you’re gonna have to stay with me here, Phantasio then reaches down the back of DeVito’s tights and pulls out pink boxers with hearts on them. So shocked and dismayed is DeVito, that Phantasio is able to get a rollup from behind for the win. Yep. The finish was an atomic drop and forceful underpants removal followed by a rollup. If I were Tony DeVito, I think this would have represented a turning point in my life, when I really would have had to reevaluate my life as a professional wrestler. Anyway, Phantasio then celebrates by pulling out referee Earl Hebner‘s underpants too, because he’s a god damn bully. And yes, Hebner’s underpants were black and white striped, because that’s what refs wear. Duh.

Sigh. I’m sure most of you have simply stopped reading by now, but there you have Phantasio’s entire televised WWE run. Del Rios was sent back to Memphis to amass more wrestling experience with assurances from Vince that the gimmick was great. Unfortunately, according to a piece I read on Ringthedamnbell.com, Del Rios believes the character was then squashed because The Undertaker thought it too closely resembled his character. I mean, I can’t tell you how many times The Undertaker came to the ring dressed as a mime, pulled endless ribbon out of his mouth and then pulled his opponent’s underwear out of his or her pants. Actually, I’m fairly certain that’s how he beat Hulk Hogan for the title at the 1991 Survivor Series. Anyway, Del Rios would never again return to WWE television. He ended up working in Memphis a lot, even joining the original USWA version of the Nation of Domination. His only other prominent appearance on national television was under his real name, Del Rios, on the debut broadcast of TNA in 2002. Del Rios was basically dressed like “Big Poppa Pump” Scott Steiner, and competed in a Gauntlet for the Gold match (a ripoff of the Royal Rumble), which Ken Shamrock won to become the NWA Champion.

As for Harry Del Rios, he has continued wrestling in the independents as The Spellbinder, entertaining fans with his magic and even some slow motion wrestling, which you can watch below (it’s actually pretty entertaining, and well performed). He has also continued appearing in body building and fitness competitions. His lack of a true WWF run is a bit of a shame, because Del Rios could have had a nice mid-card career in the WWE with the right gimmick. He was big and muscular, which has always been Vince’s cup of tea, and he could move a bit, like I said earlier. Unfortunately, they ran with the creepy magician gimmick and it went nowhere.

Phantasio’s run may have been brief, but he shone brightly enough to get inducted to the BGHOF. Welcome Phantasio!