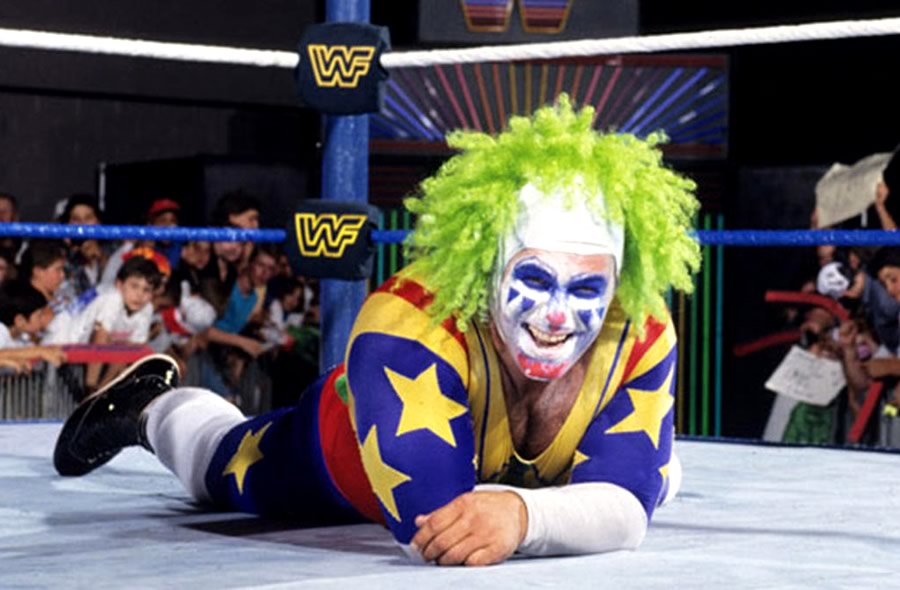 I know you guys thought the Bad Gimmick Hall of Fame was already chock full of clowns (hyoooo), but today we induct an honest-to-god clown! That’s right boys and girls, the profession that was started to amuse children of all ages everywhere, but quickly turned into my own personal nightmare, is now in the BGHOF! Welcome to The Hall, Doink the Clown!

As we always do, let’s meet the man behind the face paint–at least the original man behind the face paint–Matt Osborne. Osborne, a second generation wrestler (his dad was “Tough” Tony Borne, a huge star in Mexico and Texas), made his in-ring debut in 1978 as Matt Borne and spent some time in several NWA territories. He had some success traveling about, most notably winning the Pacific Northwest Wrestling heavyweight title and then teaming with Ted DiBiase and Jim Duggan in Mid-South Wrestling as The Rat Pack. At this point, he was a real rising star in the pro wrestling world, which led to his first contract with WWF, in 1985. He didn’t do much during this stint, but he does have the distinction of wrestling against Ricky “The Dragon” Steamboat in the third match of Wrestlemania I at The Garden. Unfortunately, like he did throughout his first WWF run, Borne did the job to the Dragon. By 1986, he was gone from the WWF, and onto WCCW in Texas to team with Buzz Sawyer. In 1991, World Championship Wrestling came calling, and Borne was given his first shitty gimmick–an outdoorsman named Big Josh who dressed like a lumberjack and came to the ring with dancing bears… Somehow, this wasn’t his worst gimmick, because…

Borne’s first WWE run was not that exciting, so when they signed him again in 1991, he probably thought he was going to have a chance at redemption. Instead, Vince McMahon literally made him look like a clown. One thing I will say about this gimmick, is that it was rolled out in a pretty great way. Usually when a guy would come in during that day, we’d see video vignette packages for a few months before he would debut by squashing a some jobber. When WWF rolled out Doink, he was just a nameless clown that patrolled the arena. The cameras would find this unnamed clown and follow him throughout the arena as he played mean tricks on kids, like squirting them with trick flowers, and Vince McMahon or Gorilla Monsoon or whoever would react with shock and disapproval. This went on for roughly the last three months of 1992. Talk about a slow burn.

Eventually, the clown’s tricks got meaner, and he even started playing tricks on wrestlers. He used a tripwire to trip the Big Boss Man, and he had a good back-and-forth with Marty Jannetty where he pretended to douse the former Rocker with a bucket of confetti one week and, when Marty least expected it, doused him with an actual bucket of water weeks later. Eventually, he messed with the wrong man, Hawaiian nice guy, Crush. Crush admonished Doink for his mean tricks, taking him by the arm and basically telling him to “cut the shit”. This turned out to be a huge mistake for Crush. During one of Crush’s matches a couple of weeks before the 1993 Royal Rumble, Doink came to the ring with his arm in a sling to apologize to Crush. He did just that but, when Crush turned his back, Doink ripped off his fake arm, which, as it turns out, was loaded with lead, and beat the living hell out of Crush. Because of that, Crush couldn’t compete in the Rumble, and a feud was born.

As a side note, this was one of the most devastating moments of my childhood wrestling fandom. I was literally crushed (see what I did there?) when this happened. My eleven year old brain couldn’t comprehend what was going on. I suspected wrestling was fake, but there was Doink clearly hammering on Crush with the loaded arm. Those blows didn’t look fake at all! Why would they risk injuring Crush like that? Was this clown not really a WWF employee? It didn’t occur to me that that arm was probably just made of memory foam (or the 1993 equivalent there of), and that Crush probably just had an injury he needed to get fixed and this was a way to write him off TV. I just really hated Doink! What a dick!

Anyway, getting back on track… According to an interview Osborne did with Tha’ O Show in 2010, this gimmick was completely Vince McMahon’s idea. Osborne was never forced to do the gimmick, but it was created essentially for him, because Vince believed he specifically could pull it off. At first, Osborne wasn’t sure, but decided to go with it. This is where Osborne’s talent really needs to be appreciated, because, as ridiculous as an evil clown was, he got the character over with the crowd as a legitimate detestable and frighteningly creepy heel.

For me, it was all in the presentation, and it all started with the theme song. Doink’s theme started out with the typical circus big top music, before suddenly changing into a slower, darker horror type theme with evil laughing clowns in the background. At the same time as the music change, Osborne’s demeanor changed with it, as he would sink into a much more evil persona, complete with an almost dead-eyed look and sinister, unhinged laughter. It wasn’t over the top laughter, just a laugh that told you this guy was off his god damn rocker and very dangerous. In the ring, Doink was mean and aggressive, which was all the more intimidating because he was dressed and acting like a clown. Basically, he was Pennywise from “It,” but he could suplex. They did add a little bit of cornyness to the gimmick, like naming his finisher–a top rope seated senton–the “Whoopie Cushion,” but come on, it was 1993 WWF after all.

Also, and this was probably the most infuriating part, there’d always be another god damn Doink hiding under the ring! Whenever Doink was in trouble, he’d scurry under the ring, only to come out the other side looking surprisingly refreshed and ready to kick some more ass. This nefarious tactic was used during Doink’s Wrestlemania IX match against Crush, as the second Doink (played by Steve Keirn, who might get into the BGHOF with his Skinner gimmick) beat the crap out of Crush with another gimmicked arm, giving the clown a debut win on the WWF’s biggest show of the year. The feud with Crush continued for months, before he eventually wrestled against Bret Hart at SummerSlam. Doink would turn into a fan favorite that September and feud with Jerry “The King” Lawler, which is when this gimmick was completely ruined.

From that point forward, Doink was a good guy. His music was no longer evil, he no longer did his sinister laugh and that mean streak in the ring was gone. All of the cool things that gave Doink an edge didn’t work if he was a fan favorite, so Doink couldn’t do them anymore. Basically, he was just a regular clown who wrestled and was mostly used as comic relief, kind of like Ryback (hyoooooo). The gimmick also suffered because it wasn’t Osborne under the paint. Due to reoccurring drug issues, Osborne was fired in the fall of 1993, and the gimmick was given to Ray Apollo. Bless his heart, but Apollo was really given the short end of the stick here. Remember when we talked about how WCW brought in The Renegade to basically pretend he was the Ultimate Warrior? This was kind of the same thing. Also, it didn’t help that the WWE really went the comedy relief route with this gimmick. They gave him a little person named Dink as a sidekick, and did stupid and terrible things like having “The Four Doinks” (really The Bushwhackers and Men On A Mission dressed as clowns) wrestle at Survivor Series. Don’t worry, the real Doink came out after to taunt the baddies… which made everything not terrible. Just kidding, it was complete shit.

Sadly, that wasn’t even the dumbest Survivor Series match Doink was involved with during this run. In 1994, Doink and Dink teamed with two other little people in clown outfits named Wink and Pink to face Lawler and his team of little people named Queasy, Cheesy and Sleazy. First of all, all of that is offensive. Second of all, it was about as entertaining as dead cat. Doink would have one more Wrestlemania match during this run, with Dink against Bam Bam Bigelow and Luna Vachon. After that, the character became a jobber and faded away… at least on WWF television. The character has appeared all over the country’s independent scene, played by many wrestlers at different times.

As for Osborne, after his release, he found himself playing Doink in ECW, where he was involved in a program with Shane Douglas, who wanted to bring out the best in Borne because of the way he was underutilized by the WWF. This led to kind of a cool thing where Borne would wrestle as Borne Again, but in basically half clown makeup. The idea was that he was suffering from borderline personality disorder because he had been forced to wrestle as Doink by Vince McMahon for all that time. As he teetered on the brink of insanity, he would often humiliate opponents by dressing them in clown clothes after beating them. Once again, this character worked because of Osborne’s talent and commitment to the character. It didn’t last long, but it was a cool idea that Osborne, once again, ran with and made somewhat successful. After his ECW run, he returned to the independent circuit, where he used an updated version of the Doink character, and even reprised the original Doink role in a battle royal ont he 15th anniversary of RAW in 2007. Unfortunately, in 2013, Osborne died of an accidental drug overdose at the age of 55.

It was a sad ending to a life that brought a lot of joy to a lot of people, even if his best work was as an evil clown. As far as the Doink gimmick, it lives on throughout the independent scene. I’m sure we’ll be seeing Doink at WWE anniversary shows for years to come. You can also see him in the Bad Gimmick Hall of Fame. Rest in Peace, Matt Osborne.