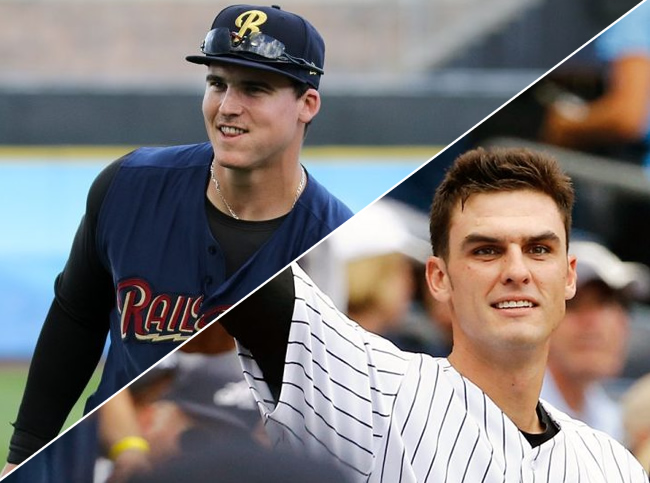 As all Yankees fans know, our long-time first baseman, Mark Teixeira, announced his retirement at a tearful press conference yesterday afternoon. So who’s next up to man first base for the Yankees, Greg Bird or Tyler Austin? Let’s discuss.

First of all, I have to talk about Teixeira. I’m not going to kiss his ass fully, because that’s not the type of fan I am. At the end of the day, he’s one of the better power hitters the Yankees have had in the last decade or so and, save for a few injury-riddled seasons of late, he put up some pretty big time numbers in his eight seasons the Bombers (201 HR, 605 RBI overall). He was also a key part of the 2009 World Series Championship, hitting .292/.383/.565 with 39 HR and 122 RBI in his first season in pinstripes.

That being said, it was time for Tex to leave the team. He’s currently in the last year of his contract, and he wasn’t going to be brought back for next year (I hope). Did I think it was time for him to leave baseball all together? Probably not, but I guess if you can’t play for the Yankees, why play anywhere? Tex had a good run, and we’ll at least miss his golden glove at first base, and the fact that he’s a pretty good guy overall. Thank you, Tex.

OK. Now let’s get to the kiddies whose job I hope it is to carry on the Yankees first base legacy.

Yankees fans got to know Greg Bird, a fifth round pick out of  Grandview High School in Aurora, CO, quite well over the last two months of the 2015 Season. With the offense struggling (what else is new?), the Yankees turned to one of the kiddies to see if a spark could be lit for the playoff push. That kiddie was a then-22-year-old who had made a good impression in spring training, and had then gone on to tear it up at AAA Scranton.

Bird wasted very little time in making a good first impression. Over the last couple of months, he started 42 games (played in 46 overall) and hit an outstanding .261/.343/.529 with 9 doubles, 11 homers and 31 RBI. Paced out over 162 games, that would have put Bird at 38 home runs and 109 RBI. He struck out too much–53 times in those 46 games–but the power numbers definitely negate that bad stat.

Fans flocked (ahh?) to social media to sing Bird’s praises. Hell, I was even inspired to make fan art! I knew Bird was a big deal when a shady guy at the train station one morning started talking to me about how his magical homer run barrage compared to that of Kevin Maas back in 1990. If the shady train station man’s talking about it, it’s a big deal.

Unfortunately for Greg and the Yankees, his coming out party ended up being his last baseball action of any kind for going on eleven months now. As spring training approached, and we all wondered whether Bird would make the team–a healthy Teixeira was blocking him at first base, and Alex Rodriguez at DH–it was revealed that Bird would be having surgery to repair a lingering shoulder injury.

Suddenly, the enticing positional battle, and my anger that yet another young and exciting player would be blocked by some aging veterans with albatross contracts, were ripped away from us. Bird would miss the entire 2016 season. Talk about letting the air out of my fan balloon, right?

Anyway, Bird has been rehabbing hard for the last year or so, and expects to be ready to get back to playing ball for the Yankees in 2017, which is great. His left-handed power stroke is a perfect fit for Yankee Stadium, and puts him very nicely in line with former Yankees first basemen, like Tex (who is a switch hitter), Jason Giambi, Tino Martinez and Don Mattingly. I’m not saying Bird will be as good as those guys were in their primes–or as bad as Kevin Maas ended up being–I’m just saying he fits that certain mold, and could be a very good player for this team moving forward.

Before this year, there really wasn’t any competition for Bird’ future gig. The Yankees didn’t have any other legitimate first base prospects ready to go (hence why guys like Ike Davis and Chris Parmelee filled in for an injured Teixeira this year). It was assumed that, by the time Bird got healthy, the job would be open for him to swoop in and take (see what I did there?).

Well, 2016 has been a hell of a year, because things have changed. Just as suddenly as Bird got injured, another young first baseman is back on the map and ready to compete for the job.

Tyler Austin, whom the Yankees took in the 13th round of the 2010 draft out of Heritage High School in Conyers, GA, has had a bit of a boomerang climb through the team’s minor league system.

He first put himself in the prospect map with a monster 2012 season that saw him climb all the way from Rookie ball to AA Trenton–a four level journey. In all, he hit .322/.400/.559 with 35 doubles, 6 triples, 17 home runs, 80 RBI and 23 stolen bases. Wowsers, right? His numbers, as well as his ascension up the minor league ladder, were good enough to get Austin the Yankees’ Minor League Player of the Year for 2012. All of a sudden, the Yankees had a hot prospect on their hands.

Unfortunately, the good times didn’t last. At one point or another, every player has to overcome adversity if they’re going to make the major leagues. For some players, this adversity comes sooner than it does for others. For Austin, the 2013 season really represented the rock slide that nearly knocked him all the way back down the mountain.

The main culprit for Austin was a wrist injury around the middle of that 2013 season. He attempted to play through the injury, which ended up lingering until well into the 2014 season. As his body betrayed him, his numbers tanked and he lost confidence. The downward spiral continued into the 2015 season, and Tyler found himself demoted to AA.

Things got worse. In September of 2015, he was designated for assignment and placed on waivers for anyone else to claim so that the Yankees could clear a spot on the 40-man roster. Nobody claimed him, which I imagine feels a little like getting picked last for kickball in elementary school gym class, but about 100 times worse. When you get picked last for kickball, you don’t then have to think about whether or not you need to give up on your dreams and change careers. The future was looking pretty bleak for Austin, and he fell completely off of any and all top Yankees prospects list.

As I mentioned, every player must overcome adversity in order to make it. After getting demoted, and nearly released, Austin got to work on rebuilding his status. He reported to the Arizona Fall League and hit well, then repeated the performance in the Venezuelan Winter League. By the time the 2016 regular season came along, he was ready.

Some eyebrows were raised, and Austin started popping back up on prospect lists everywhere. While he’s not currently on the MLB Pipeline top 30 for the Yankees, I don’t think he’s too far away either. In fact, Austin is now on the short list of guys who could be called up now that the Yankees are cleaning house and opening up roster spots for their prospects to come show what they have.

Will this rollercoaster ride end in a major league debut in 2016 for Austin, and a permanent big league job in 2017? It will be interesting to see what happens over the next few months, specially now that Alex Rodriguez has also announced his retirement.

Prior to this season, I would have told you that Bird was the guy that should get first crack at the regular first base job after Teixeira was no longer on the team. I think Bird showed enough down the stretch in 2015 to be the favorite come spring training if he’s healthy, but you can’t ignore what Austin has done this season.

I think an open competition is what’s best for all players, because it will push everyone involved to do their best. The Yankees owe it to themselves to give Austin a very serious look this spring. After all, do we really know that Bird will bounce back to 100% of the player he was before the surgery? That’s a big question mark with any injured player.

One thing that could help both of these guys is Austin’s versatility. While Bird is a first baseman, and has never really done anything else at the professional level (other than catching three games as a 19-year old in 2012), Austin has experience playing at a few positions. Just this season, Austin has played first base, third base and both corner outfield positions. To me, it’s a very real possibility that both could make the team out of spring training–Bird at first base and Austin as a utility type guy… unless the Yankees make more spot-opening trades this offseason.

Either way, it’s nice to have possibilities. I wish both of these guys well, and hope to see them both in the Bronx next season.