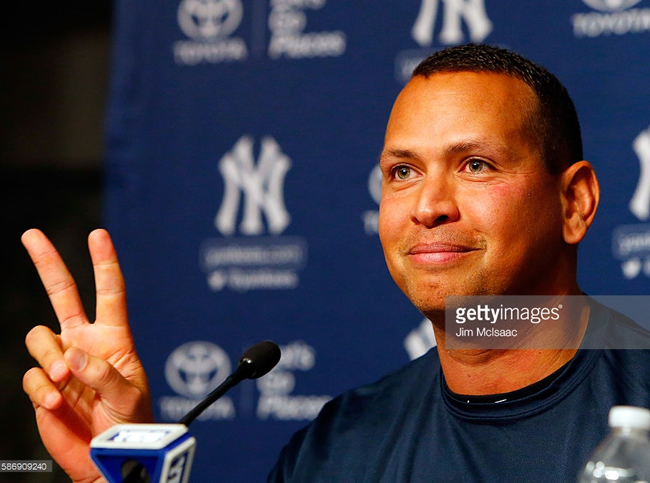 That day, I made the familiar trip on the Grand Central Parkway and Major Deegan Expressway to Yankee Stadium in the Bronx. It was a trek I had embarked on many times before, but this time was special.

Alex Rodriguez was the reason.

The best player of his era–and one of the greatest of all time–had been traded to the Yankees in a shocking turn of events that involved a freak off-season injury to Yankees’ third baseman Aaron Boone and a strange standoff between the Texas Rangers and Boston Red Sox.

The Rangers and Red Sox had a deal in place for Rodriguez, but that agreement was held up after the MLBPA rejected a proposed pay cut Alex had agreed to take, causing the Red Sox to demand that the Rangers eat a more substantial portion of the hundreds of millions of dollars remaining on his contract. This impasse allowed the Yankees–who now had an opening at third base due to the Boone injury–to step in and steal Rodriguez out from underneath their arch rivals in Boston.

Boone’s injury–which occurred doing unauthorized physical activities in the off-season–had given the Yankees the opportunity to void his contract. The question was whether or not Rodriguez, who was a shortstop–a position the Yankees already had filled by team captain Derek Jeter–would accept being moved to third base. He agreed, and the deal to send the superstar to the Bronx went from pipe dream to reality.

April 8, 2004 was Rodriguez’s Yankee Stadium debut and I was lucky enough to have a ticket. Truthfully, I don’t remember much about the game, but I was elated to be there in person to watch the first home appearance of this incredible talent in pinstripes.

Alex Rodriguez’s Yankee odyssey had many ups and downs.

There were the multiple MVP awards, the unbelievable 2007 season where he carried the Yankees into the playoffs like a human tow truck, and the phenomenal performance in the 2009 post-season that finally rid him of the largely unfair “he’s not clutch” reputation and culminated with his first and only World Series championship. But there was also the 2004 ALCS collapse against Boston, the 2006 post-season where he was dropped all the way to eighth in the order, and of course, the steroid revelations. All in all, it was one hell of a journey.

And now, that journey has come to an end.

On Sunday, the 14-time All-Star–who struggled mightily with the bat this season and couldn’t produce well enough to crack the starting lineup most nights–tearfully announced that this Friday, August 12, he will play his final baseball game as a Yankee. After a 22-year career that began in Seattle and made a brief pit stop in Texas before ultimately winding up in New York, Rodriguez, in all likelihood, says goodbye to playing the sport that made him a very wealthy and happy man. He is the second Yankee to announce his impending retirement this week, as first baseman Mark Teixeira announced Thursday he will step away from the game at the end of this season.

Rodriguez will stay on with the Yankees as a special advisor and instructor through 2017 and he will be paid the full amount of the remainder of his player contract. He will likely excel in this role, as he has always been known for being a baseball genius who sees the game in a way few others do. Yankees shortstop Didi Gregorius has credited Rodriguez as being a major help in his offensive development and numerous other players–including former teammate Robinson Cano–have likewise sung his praises in this capacity.

Rodriguez always had a very tenuous relationship with the Yankees’ fanbase, something I never quite understood, especially pre-steroid revelations. Sure, he wasn’t as smooth with the media as Derek Jeter, but his “choke artist” moniker was more perception than reality and it has always struck me as odd that a player so great could have so many of his own team’s fans dislike him. For this reason, it is unclear at this point–especially bearing in mind the steroid issue–exactly how history will regard his Yankees legacy.

But one thing is for sure: For all his faults, Alex Rodriguez is one of the greatest baseball players any of us has ever had the privilege to witness play the game. It isn’t completely out of the question that he’s taken his last at bat, given that another team could theoretically give him one last shot as a designated hitter, but odds are Friday will mark the final time we see Alex Rodriguez in the batter’s box.

I will miss watching good ol’ #13 and, much like I was on that fateful day on April 8, 1994, when his Yankees career began, I will be equally grateful for the chance to drive up the Grand Central and the Major Deegan to see him don the pinstripes at Yankee Stadium one last time on Friday night when his Yankees career comes to a close.