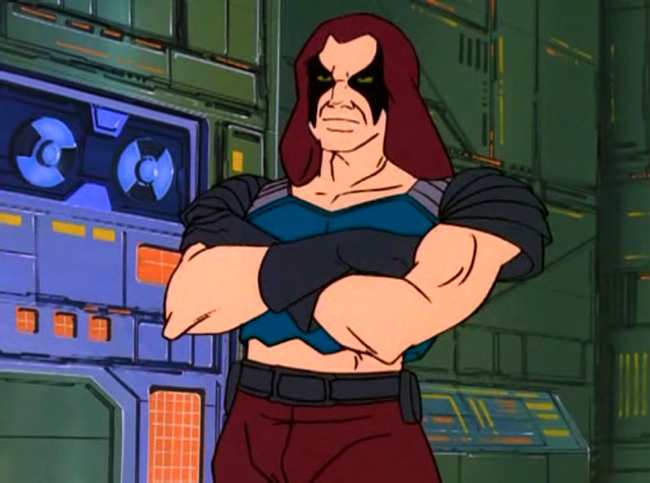 Here at Jobu’s Rum, we’re no strangers to covering G.I. Joe’s 1980s toy line. You can read our previous coverage here. Since I hadn’t written anything new about this in a couple of months, I figured it was time to get back on the horse. So let’s talk about the leader of those wacky Dreadnoks… Zartan! 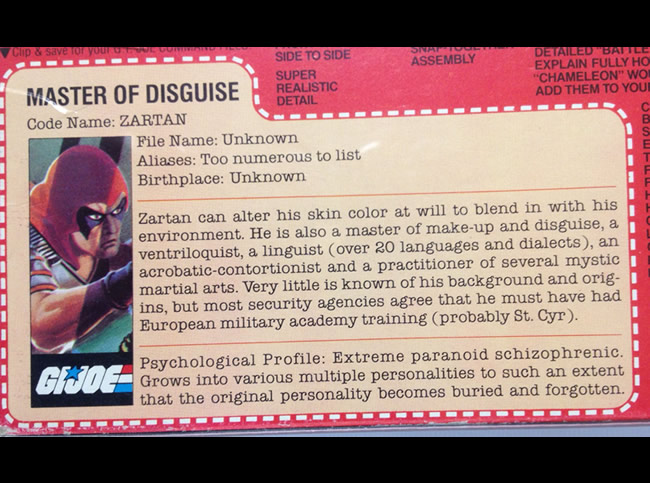 All you have to to find out how awesome a dude Zartan was is look at the file card above. First of all, let’s look at the “Psychological Profile” section. It says:

Extreme paranoid schizophrenic. Grows into various multiple personalities to such an extent that the original personality becomes buried and forgotten.

Well ho-lee-shit! You tell me that off the bat, and that’s a guy that I’m very much not going to mess with. If you need more proof that Zartan is too bat-shit-crazy for his own good, check out his file name, birthplace and aliases. Nobody knows his real name, or where he’s from, and he has so many personalities, that listing all of his other names would either be too much for whatever lazy bastard wrote this card, or they would simply take up too much room. How many people does he think he is?

The really scary part, though, is how many borderline supernatural talents Zartan has. For one, he knows over 20 languages. Can you even list 20 languages, bro? I often think I’m hot shit because I speak two fluently and dabble in a third. This guy speaks ten times as many as me. Does he even know he’s speaking them, or do his other personalities just know them? I have no idea, and it is absolutely terrifying.

Oh, did I mention he can change his skin color? His fucking skin color! He’s a white guy today. He might be black guy tomorrow. He might be hispanic on Monday. He doesn’t even need make up? Seriously? The best part is, much like his Cobra teammate the Baroness, he actually has awesome mask and makeup skills. I guess black or hispanic Zartan is probably going to look like white Zartan, so some additional disguise elements would be needed. Did I mention the acrobatic contortionist part of his tool kit yet? How cool is that? If Cobra ever had a scheme to impersonate the United States gymnastics team, Zartan could have dressed as Dominique Dawes and pulled it all off with litte trouble. Also, after having typed that last sentence, I’m kind of shocked that wasn’t the plot point of at least one episode from that run of cartoons. That seems like it would be right up Cobra Commander’s alley.

After reading all of that, one would think a man with Zartan’s established and advanced skill set would be running Cobra, and not be third, fourth or fifth in command with the organization (Zartan’s status fluctuated a bit when Serpentor and the Baroness were around). Unfortunately, Zartan was also often bit by the same thing that plagued all of Cobra. His cockyness often led to carelessness, which more often than not led to failure. Look. Like in professional wrestling, 1980s cartoon bad guys were dumb, and eventually always did dumb things. I don’t think it would have been much fun if they won every time. That would be a very depressing show. Zartan had to fail to keep the good beating evil narrative, it doesn’t make him any less badass.

I think Zartan’s bad-assery has been established, so all that’s left is for us to talk about the action figure, right? You can see from the picture above that, as far as G.I. Joe action figures go, this one was pretty cool. It was a pretty solid likeness of the character, complete with his face paint and his hood, a mask that makes him look like a generic white guy with a beard that shops at the same apparel store as Zartan, and they even got the skin color change thing in there! Well… sort of. When you get the figure wet, it turns blue. So, if your G.I. Joe toy story lines inclided a scene where Zartan had to dress up as a version of himself that had recently walked out onto thin ice, fallen through and drowned, you could do it! Or, you could actually just have him fall through thin ice and drown! How versatile is that? Pretty fucking versatile! I guess he could also use that to infiltrate the smurfs? I bet Gargamel would pay big money for that kind of talent.

Anyway, that’s it for Zartan. I hope you guys loved him as much as I do. For bonus purposes, you can watch the original Zartan action figure commercial below. Look how blue he gets!