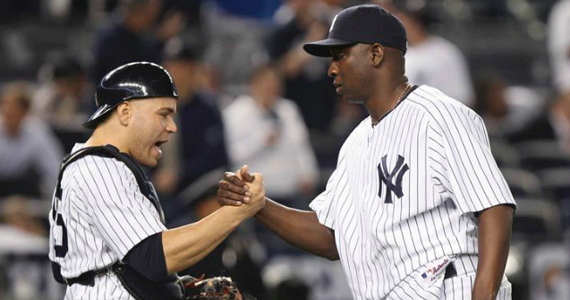 Jobu reviews the Yankees series with the Tampa Bay Rays.

Talk about a huge series for the Yankees and the visiting Rays. The Yankees used a 6-3 road trip to climb back near the top of the AL East, where the Rays and Orioles have been basically trading off the division lead. It’s actually pretty amazing how close the Yankees were to the to of the division, considering how terribly they have played this season (bad pitching, bad clutch hitting). This series had potential to define the division for at least the next few weeks. In the end, it was the Yankees who came out on top, taking two out of three, but missing the chance at the sweep. Here’s how it all went down.

Talk about an ass whooping. It’s always important to take the first game of a big rivalry series, so that you can set the tone for the rest of the series, and that’s just what the Yankees did. This one was never in doubt. The Yankees jumped all over “Big Game” James Shields early, and he was out of the game after the fifth with over 100 pitches and seven runs allowed (five earned). The opening salvo had been fired. It was nice to see Hideki Matsui back in Yankees Stadium, albeit for the hated Rays though. Welcome back Hideki. Eat loss.

I don’t think I’ve ever seen Andy Pettitte strike people out at the rate he has been striking opposing batters out during his comeback. In this game, he struck out ten batters in 7.1 innings. It was his third win, and he has had more Ks than innings in all three wins. I guess when he has the strikeout pitch working, it’s gonna be a good day for him (unlike Nova, who can strike out 12 while allowing 5 runs). Andy was pretty vintage in this one, completely shutting down the Rays over the game by keeping them off balance. He continues to astound us with his pitching in this comeback attempt. Even his losses weren’t the worst starts I’ve ever seen. He has really helped this rotation click into gear, and it’s no surprise. His final line for the night: 7.1 innings, 2 hits, 0 runs, 2 BBs, 10 Ks, 103 pitches. Kudos.

On a side note, it was nice to see Freddy García alive and well. The maligned righty came in with two outs in the eighth and allowed only a couple of hits over his 1.2 innings. Get the mop out, Freddy. At least now I know why he’s still on the roster, although I still don’t think he should be.

Grand Slams For Everyone

For the second time in less than a week, the Yankees hit a big fly with the bases loaded. This time, it was Russell Martin. It was just the Yankees fourth hit of the season with the bases loaded (wow), but their third Grand Slam, which ties them for first in the league. At least they make the hits count when they suck. Martin hit his Granny in the bottom of the fourth inning, but the Yankees had scored two runs in the bottom of the first too. With the bases loaded and two outs, Raúl Ibañez hit a hard ground all up the middle, but it was fielded by Elliot Johnson because Rays’ manager Joe Maddon is shiftier than a crackhead in withdrawal. Unfortunately, Johnson forgot how to throw and short-hopped one over to Peña, who couldn’t handle it. The error scored both Curtis Granderson and Álex Rodríguez, and gave the Yankees a big 2-0 lead early.

The last run came across in the bottom of the fifth when Nick Swisher, who has been driving in about a run per game lately, doubled into the right field corner to score Robinson Canó. The Yankees wouldn’t score any runs off of the Rays bullpen the rest of the way, but they didn’t really need to now, did they?

After knocking the Rays around in game one, the Yankees came back for game two hoping to seal up a series win. Much like the last week or so, they got some very good starting pitching, and even a little timely hitting (although not much) and they managed to take game two from the Rays as well.

We finally got a serious outing from Iván Nova! He didn’t give up six runs whole the Yankees scored seven. He didn’t give up five to win 6-5. He didn’t even allow a home run (just a double and two triples)! All kidding aside, though, Nova was pretty brilliant in this game. He allowed a leadoff single to youngster Desmond Jennings, who was erased from the base paths with a double play two batters later, and that was it for the better part of the next eight innings.

After that single, Nova didn’t give up a hit until the eighth inning (a double to Sean Rodríguez). During that time, he walked a batter and hit a guy, but no one ever really threatened to score. The main thing that relieved me about this performance by Nova was the fact that he had thirteen ground ball outs. In fact, of his 24 outs, only four left the infield. The only run Nova gave up came in the top of the ninth, after Girardi gve him a chance to finish the shutout. Back to back triples to start the inning signaled the end of the night for Nova, and Soriano came in to clean up the mess for his eighth save. Nova’s final in his now team-leading seventh win line looked like this: 8+ Ip, 4 H, 1 R, 1 BB, 5 K, 103 pitches.

Through the first seven innings of this game, the Yankees managed only two hits off of Rays rookie Alex Cobb. In typical Yankees fashion, they were both solo home runs. The first came in the bottom of the second, when Teixeira deposited a curve ball over the right field fence for a 1-0 Yankees lead. In the bottom of the fourth, just after A-Rod got caught a little too far off of first base on a not-so-wild pitch and got himself picked off, Canó got a fastball up and hit a screaming line drive that just managed to get over the right field fence. It gave the Yankees a 2-0 lead, and would really be all they needed the way Nova was hurling.

The Yankees finally broke through for a real rally against Cobb in the bottom of the eighth. Ibañez led off with a single to right and was pinch-run for by Dewayne Wise. Swisher came up next and doubled him in, and he was immediately doubled in by Eric Chavez. After Burke Badenhop relieved Cobb, the Rally sputtered quickly and J.P. Howell ended the inning by getting Granderson to ground out to first. You’re not always going to score seven runs, so it’s nice to see the Yankees pitching got them through this game (although four runs isn’t the worst thing I’ve ever seen either). Solid performance by the Yankees all around.

The Yankees had a chance to sweep the Rays and, coupled with a Baltimore loss, take over first place all on their own. Unfortunately, the RISP monster struck again, and the Yankees couldn’t score any runs off of David Price despite having him on the ropes multiple times. There is nothing more frustrating than when the Yankees do this. Anyway, They didn’t hit, they didn’t really pitch, and they didn’t play defense particularly well. This is a recipe for disaster, and that’s what we got to end the series.

I know CC Sabathia is our ace. I know how invaluable he is to this staff. I know how gutsy his outings have been this year. The Big Lefty™ has not had his best stuff this season, but he has fought his way to seven wins. I also know that I’m getting tired of him not going out there and dominating. I just want him to have one game like the one he had against Milwaukee last year, or the 1-0 win over Tampa. He hasn’t done that. I want him to go out there and dominate from the first out to the last. Just once this season. Please.

He didn’t really have it all together in this game at all, although a lot of luck and bad defense played their roles too. In the top of the second, he allowed a leadoff double to BJ Upton, got the next two men out and then gave up a jam-shot bloop RBI single to José Lobaton… of course. In the third, A-Rod threw a ball into the stands that started a two-run rally (although CC did give up the RBI single and another double in the inning, A-Rod only put the first man on. By this time I had kind of checked out of the game (this one had frustrating RISP and ineffective CC game written all over it from the second on), but the Rays got two more in the fourth on a two-run double by Drew Sutton (and some hilarious defense). That was all for the Rays off CC who, again, managed to get through seven with a season high of twelve strikeouts.

The Rays got two more runs in the top of the ninth off of Clay Rapada and Cory Wade (just to emphasize the kind of game it was going to be) when Nick Swisher made a throwing error that allowed Matt Joyce to score on a double by Sutton and then Johnson doubled Sutton in. Terrible. Sabathia’s final line looked like this: 7 Ip, 7 H, 5 R (3 ER), 1 BB, 12 K, and he got his third loss of the season.

We Mean You No Harm

David Price was jumpy from the beginning of this game. His command was off and his pitch count was up (as it has been pretty often against the Yankees lately), but the Yankees did their best to coax him through the five innings he was able to get through. Like a scared abandoned puppy that they found injured in their yard, the Yankees just wanted Price to know that they weren’t going to hurt him. They just wanted him to be ok. Overall in this game, the Yankees went 1-10 with RISP and left ten men on base. The worst offense came in the fifth inning when, with Price already over 100 pitches, they (of course) didn’t get a run out of a bases loaded, one out situation. A Chris Stewart single and walks to Jeter and Tex loaded them up (Granderson struck out after Jeter), but Price, who threw about forty pitches in the inning, struck out A-Rod and got Canó to ground out. That was the ballgame in a nutshell, so I’m not going to talk about the rest of the offense. Not worth the aggravation.