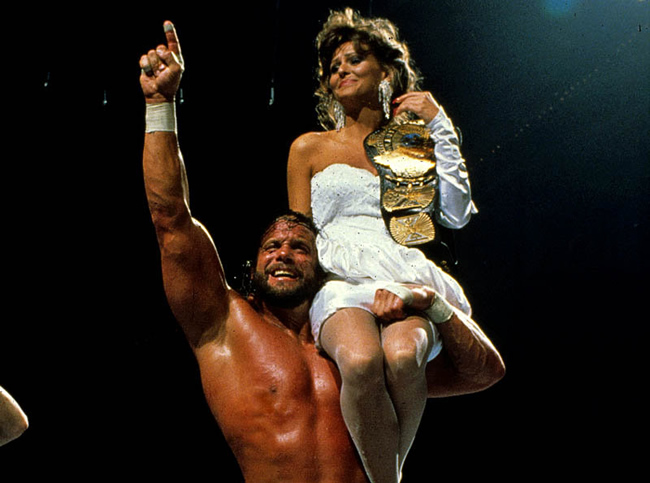 For those of you who haven’t heard, WWE announced that its current champion, Seth Rollins, has torn the ACL, MCL and the medial meniscus in his right knee, and will need immediate surgery to repair it. Unfortunately, Rollins is the current WWE champion, and so he’s been forced to vacate the belt. WWE will now hold a tournament to crown its new champion at Survivor Series this month. That got me thinking… how many times have they held a tournament for the company’s biggest prize, and how did those go? Let’s start with the first one, held at Wrestlemania IV. I know you’ll dig the results.

When you’re the “Million Dollar Man,”  you do evil shit with your money. It’s what he did in the video below, and it’s what he did all the time. In the winter of 1988, Ted Dibiase was sitting around on a pile of his own money, when he decided he wanted the World Wrestling Federation Championship around his wealthy waist. But who wants to earn titles in the ring, when you can buy them from the safety of backstage? Dibiase’s money, and the nefarious things he decided to do with it, caused such a shit storm that we were left without a champion for the first time in the history of the WWF. Here’s how it went down.

In February of 1988, all was right with the WWF. Hulk Hogan was saying his prayers and eating his vitamins (or injecting them anyway), and had held the WWF championship for nearly four years. Dibiase, the top heel in the company, decided enough was enough, and he was going to rid the WWF of it’s hero champion once and for all. In order to do this, Dibiase enlisted the help of Andre the Giant, Hogan’s biggest rival from the last year or so. The two had famously squared off in front of 93,000 people in the Pontiac Silverdome at Wrestlemania III the year before, when Hogan had slammed Andre and retained the belt. Anyway, Andre had been itching for a rematch, and another shot at the belt, for a year, and it was granted at The Main Event, a spinoff of the WWF’s NBC flagship program, Saturday Night’s Main Event, to be held on February 5.

In the weeks leading to the event, Andre revealed that he was going to win the belt and immediately sell it to Dibiase. He would then use the money to take a year off and go on a cruise. What a jerk, right? How could he just sell the belt? And how could Dibiase buy it? What a coward! How would Andre even sleep in those cramped cruise ship bedrooms? I need answers! Anyway, even with that plan in effect, there was still no guarantee Andre could even beat Hogan. Remember Wrestlemania III? Well, Dibiase knew this, so he went one step further. He was going to buy the ref, all but guaranteeing Hogan’s demise. The problem was that there was no way Dibiase was going to be able to buy the services of senior referee Dave Hebner. Dave had far too much integrity to be purchased. However, he did have a twin brother. An eeeeevil twin brother! An evil twin brother named Earl Hebner! Unbeknownst to anyone but his accountant, Dibiase drove a dump truck full of money to Earl’s house and secured his services for the big night. Everything was set up now, all they had to do was put the infallible plan into play, and Dibiase would be champ!

As you can see from the video, this brings us to the night of The Main Event, and one of the most controversial matches in WWF history. Hogan showed up to the match alone (like any good John Wayne bad ass super hero would), while Andre came to the ring with Dibiase and Dibiase’s man-servant (slave?), Virgil. The shenanigans and chicanery went on from the very beginning. Dibiase and Virgil cheated by distracting referee Dave Hebner (wink wink!), while Andre beat on Hogan relentlessly. After a spirited affair that showcased all of the agility and talent both of the competitors had to offer (a punch-to-the-face-fest), Andre hit Hogan with some headbutts to the base of the neck, and one of the worst suplexes anyone has ever seen, and layed gingerly on top of the champion with his immense gerth. Hebner counted one… two… At this point, Hogan got his shoulder clearly up, right in front of Hebner, who slammed his hand down for a devastating three-count.

At this point, Hogan absolutely lost his god damn shit. He yelled and cried to anyone around the ring, before chasing Andre, Dibiase and Virgil out of the ring. Suddenly, a man who looked identical to Dave Hebner ran into the ring to confront the ref! It was the real Dave Hebner! What in the god damn hell?!? I’m seeing double here! Four Dave Hebners! Well, the evil Hebner and the real Hebner got in each others’ mugs and argued, each claiming they were Dave Hebner. Hogan grabbed them both, unable to believe his eyes, and one of the Hebners slugged the other one and kicked him out of the ring. The crowd went nuts, thinking that the real Hebner was cleaning house, but it was actually the fake Hebner. Hogan grabbed Phony Hebner, slapped him around and press slammed him over the top rope onto Virgil, Dibiase and Andre on the floor.

Backstage, Hogan was about as distraught as anyone’s ever been about anything. I’m pretty certain he went backstage and immediately snorted a mountain of coke before cutting his promo, because he was completely unhinged. He cried and yelled like someone had stolen his child, wondering how much money Dibiase had paid for the plastic surgery to create the fake “penny pinching referee.” Hogan was practically bawling as he yelled “Look at the hundred dollar bills falling out of his pocket!” even though there clearly was no money anywhere, because why would the fake Hebner ref a match with hundreds of dollars sticking out of his pants? He probably put it in his locker, like anyone else would do with a bribe. The show ended with Andre handing what he called the “WWF World Tag Team Championship” to Dibiase, and millions of Hulkamaniacs all over the world banging their heads against the wall in frustration and anger. Meanwhile, Dibiase wrestled as champion in that weekend’s house shows.

Thank god for WWF President Jack Tunney, because he wasn’t having any of this shit. Because of the tomfoolery, he stripped Dibiase of the title and decided to hold the championship tournament at the granddaddy of them all, Wrestlemania IV. Hogan, Andre and Dibiase would be allowed in the tournament, which was pretty generous of the President. If you ask me, Andre and Dibiase should have been banned for the crap they tried to pull. Anyway; Andre and Hogan received first round byes, for some reason, as they, and twelve other superstars, vied for the title. That meant that there would be no final between Hogan and Andre, which means everyone and their mother would probably predicted a Dibiase/Hogan final, with Hogan going over to regain his belt.

Not so fast, fans. The Andre vs Hogan second round matchup started out innocently enough, but by the end, it was a shit show. Hogan’s anger, and Andre’s ruthlessness, led to the two of them eventually cracking each other with chairs. The ref, Joey Marella, disqualified them both. What what what?? Rip up your betting slips, ladies and gentlemen! We were going to have an all-new champion! As the tournament continued, it was clear that the fans were getting behind “Macho Man” Randy Savage. Savage got through “The Natural” Butch Reed in the first round and Greg “The Hammer” Valentine in the second round (Valentine had defeated Ricky “The Dragon” Steamboat in the first round).

Meanwhile, other favorites were falling left and right. “Hacksaw” Jim Duggan lost to Dibiase in the first round. The One Man Gang took out Bam Bam Bigelow in round one, and Jake “The Snake” Roberts and “Ravishing” Rick Rude were both eliminated when they went to a time limit draw in their first round matchup. Dibiase took care of Muraco in the second round, and advanced to the finals after the Hogan and Andre debacle. Talk about an easy road! Macho Man, meanwhile, somehow got passed the One Man Gang in the semis to make it to the finals against Dibiase, and we had our main event!

As you can see, this match was a disaster for Macho from the beginning. Andre once again accompanied Dibiase to the ring (Virgil had been taken out by Hogan in the aftermath of the Andre match), and made an immediate impact. He twice tripped Savage as Savage ran the ropes, and even stood in front of Dibiase on the outside as Macho was trying to nail his patented double axe handle to the Million Dollar Man’s head. At this point, Savage realized he was fighting an uphill battle, so he sent his lovely valet, Miss Elizabeth, to the back. When Liz came back to ringside, she evened the playing field for Savage by bringing out the Hulkster himself.

With Hogan now neutralizing the giant, Macho was able to get the momentum swinging in his favor. Soon, Hogan would swing that momentum even further. With the ref distracted and yelling at Andre on the outside, Hogan grabbed a chair, snuck into the ring and cracked Dibiase across the back as he held Savage in his patented Million Dollar Dream sleeper. Like… for no reason. If you really examine Hogan’s tenure as a good guy in the WWF, he cheated an awful lot. It was a bit ridiculous. Anyway, when Savage came to and realized saw Dibiase laid out on the ground, he ran up to the top rope and hit his flying elbow for the one… two… three! Thus ended the first ever WWF championship tournament, and began Randy Savage’s first WWF title run. Here’s what the final bracket looked like:

Anyway, it’s hard to convey just how big a deal this tournament was. The original Andre vs Hogan match that kicked off the event was, at the time and I believe to this day, the most watched WWF event of all time (over 15 million people tuned in on NBC). Andre and Dibiase were two of the most hated men in America. Everyone probably assumed Hogan would win his belt back, so the surprise of he and Andre eliminating each other so early really shook things up. Finally, the creation of a new superstar, especially one who was, by far, the best worker and character on WWF television at the time, was also special. I don’t think any of the other tournamnets ever felt quite so big again. It was truly awesome.