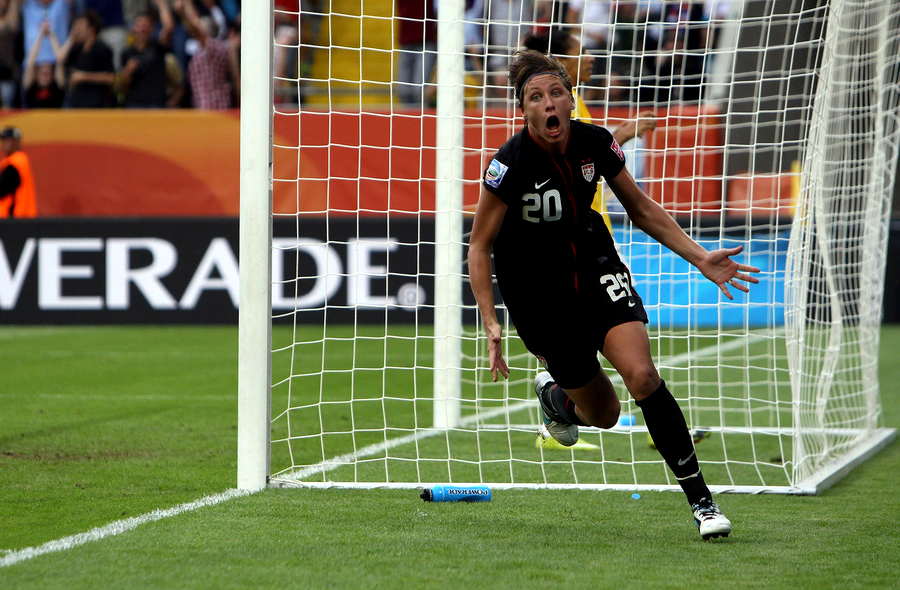 As I’m sure many of you know, The USA beat France yesterday to advance to the finals of the 2011 FIFA Women’s World Cup. I’m not going to pretend I’ve been following women’s fútbol (yes we still call it fútbol) since I was a kid or anything like that. I won’t pretend that I know all the players names. I am not a poser. The truth is I have never watched a full 90 minutes of a women’s soccer game ever in my life. Furthermore, I know two of the players’ names. The first is Abby Wambach (pictured above). I know her name because she scored a goal in the 122nd minute of the USA’s quarter-finals matchup against Brazil this past Sunday (In fact, I only watched that minute of that game and the ensuing penalty shootout). The second player I know is Hope Solo (Don’t call her Han). I don’t know Solo because she is one of the best Goalies in the world or anything. I only know her because she’s pretty hot (I love my girlfriend, but it’s true).

So why should you care? Because, all of a sudden, I care. Let’s face some facts here. The US men’s soccer team is not going to win a World Cup any time soon. Although I feel that the program has improved exponentially over the last five or ten years, they are still a long way away. Not only that, but the team that carried them all the way to the quarter-finals in the last World Cup is getting older now. How long is Landon Donovan going to remain a top talent in the world of professional fútbol? By the next World Cup, Donovan and Clint Dempsey will be 32 years old. That’s not ancient or anything, but that’s about when things could start heading south for them. Tim Howard, the great US goal keeper, will be 35. While I think young players like Freddy Adu, Jozy Altidore and Juan Agudelo will continue to improve the overall performance of the US team, there might be some weird transitional years there between Donovan and Dempsey’s primes and those of the three youngsters.

The women’s team, on the other hand, has already tasted World Cup victory twice. They won the inaugural tournament in 1991 by beating Norway 2-1 in the Finals. Then, in 1999, they famously beat China in a penalty shootout to claim the World Cup Championship (and Brandi Chastain took her shirt off… hee hee). Considering the fact that there have only been six Women’s World Cup tournaments, being a three time champion would be a pretty big deal. Not only that, but this is an exciting team to begin with. The way they beat Brazil to get to the semis was incredible. I’d consider it one of the most exciting finishes in the history of the sport for men or women. The US was down a player because Rachel Buehler had been red carded in the 65th minute. They were in the stoppage time of the second half of the overtime. This was quite literally a last minute goal. Not only that, but it came on a ridiculous 30 yard cross from Megan Rapinoe to the perfectly positioned Wambach. It was a thing of beauty. Even more ridiculous, Brazil hadn’t lost in two years! I guess I’m trying to say that this goal (and the win) was a pretty big deal.

Yesterday, the USWNT beat a French team that was regarded as possibly the country’s best team ever. For this game, I actually made it a point to ask my friend if I could use his sling box so that I could watch the game while I was at work, which I will claim I made up for this blog if confronted about it by my bosses. I couldn’t even let the fact that I was at work stop me from watching a women’s fútbol game (still making this up, bosses)! The game was tied 1-1 in the 79th minute when (who else?) Abby Wambach hit a header off a corner kick past French goalie Berangere Sapowicz, who never really stood a chance. Three minutes later the US scored again, and that was that. The US had moved on to its third World Cup Final.

I don’t know where I’ll be on Sunday, July 17th at 3 PM, when the US women take on Japan for the championship. I’m going camping this weekend, so I might be driving home and listening to it on the radio, or forcing my girlfriend to take me to her parents house so I can watch the game live. It’s near the camp site and I might already be going there to watch Uruguay take on Argentina on Saturday in the Copa America quarter-finals anyway. Whatever I have to do, I know that I will try my best to be a part of Sunday’s game form start to finish because, first of all, I don’t want to miss anything ridiculous that might happen. Secondly, and most importantly, I want to hear the words “The USA has won the World Cup!” I might not ever get another chance to hear that… At least not until 2015.