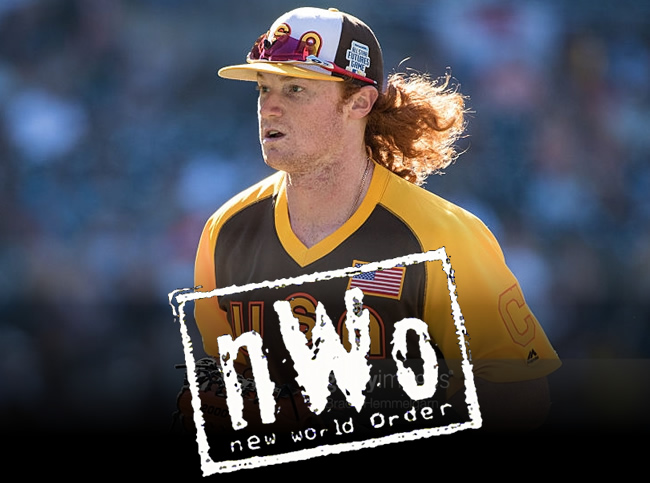 The Yankees were very busy during this year’s MLB non-waiver trade deadline, trading away several major league-level talents in order to bolster the current minor league system, which, in turn greatly brightened the potential future of the organization. Here’s a breakdown of our new kids.

Depending on what kind of fan you are–an intelligent one who wants to see the Yankees build another dynasty, or a “win now at all costs” boob–you’re either very happy right now, or in a rage so furious that Bruce Banner worried about you. I, for one, am the kind of fan that hopes to one day win 4 out of 5 championships again, so I’m ecstatic at the haul that Brian Cashman was able to get for Aroldis Chapman, Andrew Miller, Carlos Beltran and Ivan Nova. Seriously. It was like freaking Christmas!

Wow. We’re talking a top five or maybe top three system in baseball now. I can’t remember the last time the Yankees minor league system was this good, but the Core Four™ might have had something to do with it. (Pssst. That was over 20 years ago).

Anyway, sit back and let the smile creep onto your face as you read about our new favorite son.

Clint Frazier, who came over in the Miller deal along with Justus Sheffield, Ben Heller and J.P. Feyereisen, is the best prospect the Yankees acquired in all of these trades, and he was immediately ushered to the top of the team’s prospect rankings. According to MLB Pipeline, he’s ranked 24th in all of baseball and 6th overall for outfield prospects. Not too shabby, right?

I’ll let the MLB.com scouting report do the talking here:

“Frazier’s bat speed and raw power are among the best in the Minor Leagues and suggest the ceiling of an All-Star. Though he struggled to harness his aggressive approach and recognize spin early in his career, Frazier has developed into a more complete hitter as he’s climbed the Minor League ladder, with strikeout and walk rates that continue to trend in a positive direction.

Frazier has solid speed and is a capable center fielder. He’s the best equipped of New York’s top outfield prospects to play center, though he also has a strong arm and easily could shift over to right field if needed.”

I dunno about you, but that sounds pretty good to me. Frazier was the top high school position player taken in the 2013 draft (5th overall), was given a huge $3.5 Million signing bonus and put on the fast track to the majors almost immediately. For a guy who is just 21 years old and already in AAA, he has performed very well. More importantly, he’s improved his walk and strikeout rates every year, which shows that he’s not just going up there hacking, but rather is making the necessary adjustments to become a productive big leaguer.

As the scouting report says, Frazier has the tools to play center field right now. However, he was blocked here by other prospects and players in Cleveland, so a move to a corner was in the cards for him if he stayed in the organization. Currently, the Yankees have an albatross in centerfield, and Brett Gardner also on the roster, so Frazier is probably blocked from center field by default in the Bronx too. However, I consider Gardy a very tradable asset, and I doubt it will be a problem to move the veteran outfielder when the time comes for Frazier to move to the majors. Unfortunately, we’re probably stuck with Jacoby Ellsbury in center for the long haul, but the Yankees will find room for Frazier. Don’t you worry.

So far this season, Frazier has hit .273/.350/.461 with 13 homers and 13 steals across 94 games. While those numbers don’t necessarily boggle the mind, you have to keep in mind that he’s more than three years younger than the average AAA player. I was listening to WFAN on Sunday afternoon, and a Cleveland beat reporter (sorry, I didn’t catch his name) called Frazier the next Mike Trout. While the numbers don’t necessarily back that up right now, any time a guy is mentioned in the same light as one of the best pure baseball players on the planet, my pants get a little tighter… if you know what I’m saying.

Personality-wise, Frazier seems like the kind of guy that’s going to make it fun to root for the Yankees. Brian Cashman praised his makeup with an interesting quote:

“He’s got all the tools. His bat energy is already legendary. A High energy guy who shows up to the national anthem in a dirty uniform.”

Legen–wait for it–DARY! This is the kind of player the Yankees need. I mean look at that hair! Sure, it will be gone soon–Frazier almost immediately took to Twitter to exclaim that it was time for a trim–but the Yankees need some of these Nick Swisher or Shelly Duncan types to re-energize a locker room that has a reputation for being stuffy and boring– like a three-piece suit in a profession that should be all shorts and flip flops. Frazier might wear a suit on the Yankees, but i bet his will be just a little more wrinkly, and he’ll probably be hiding a stain or two under the jacket.

Did I mention that his teammates refer to him as “Popeye” because of his giant biceps? Sure, Popeye’s arms were known for being huge in the forearm area and not the bicep, but hey… these are athletes we’re talking about. The point is that Frazier’s jacked, and will hopefully come up and hit homers all over Yankees Stadium one day soon.
Considering he just made it to AAA a few weeks ago, I don’t expect him to make it to the big leagues this summer, at least in any kind of significant role. Maybe he reports to Scranton, hits the cover off the ball and gets called up, but I expect Aaron Judge will be recovered from his knee injury and holding down right field by the time that happens. Rest assured, however, that we’ll see Frazier sometime in 2017. Maybe he’ll be the Judge of 2017, waiting for a veteran to get traded so that he can take over in the late summer months.

We can only hope, right?

Update: The hair is going!