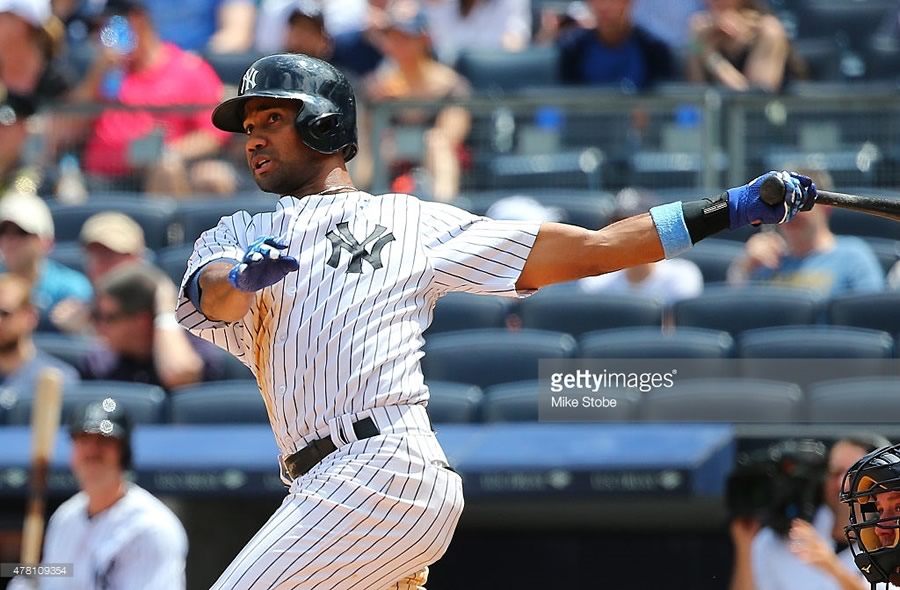 During the first month of this season, Chris Young hit so well that he had us all believing the Yankees had gotten a steal when they signed him for just $2.5 million this offseason. He was hitting as high as second in the lineup against lefties, and he even took quite a bit of playing time away from the struggling Carlos Beltran. As spring has begun to turn to summer, Young’s bat has cooled significantly. So what happened?

Considering the fact that he was released by the Mets last year for being terrible, and most people thought he might be on his way out of baseball, the first couple of weeks of Young’s 2015 season seemed pretty miraculous. Over his first 13 games, the native of Houston, Texas hit .368/.442/.816 with five doubles, four homers and nine RBI. While Beltran and Brian McCann struggled, Young was a key run producer for a team that was trying to turn things around after a slow start. He was so good, in fact, that people were clamoring for him to replace Beltran full time in the lineup!

Since then, things have gone sour for the 31 year old. In the 28 games since he went 3-6 against Detroit on April 22, Young has slashed .164/.200/.284 in 71 plate appearances, and has hit just two round-trippers. His slash lines have dipped to just .238/.292/.476 and, considering the fact that he was signed to be the power-hitting fourth outfielder off the bench, the fact that he hasn’t homered since May 2nd is a little concerning at this point as well.

There are a couple of reasons behind this collapse. The first, is that we’re talking about Chris Young. He is who we thought he was when we signed him last year. Prior to joining the Yankees last September, bashing some homers and earning his 2015 deal, Young had been pretty bad for a few years. Like I mentioned, he was released by the Mets for basically no reason other than the fact that he was bad. They could have kept him for another month, but chose to use his 40-man spot for someone else. What I’m saying is that no one should be shocked that “suddenly” this guy can’t hit. He’s been this way for a while.

Secondly, that dastardly Carlos Beltran seems to have remembered how to hit. Beltran looked about done in April, but has since turned things around, slashing .303/.316/.513 in May. He’s even got a 15-game hitting streak going right now. With Beltran hitting, there’s less of a need to play Young against lefties. You can even point to Slade Heathcott‘s arrival as a bit of a detriment to Young’s success. As the fourth outfielder, Young should have gotten more playing time when Jacoby Ellsbury got hurt. However, Heathcott came up, and the Yankees decided to play him so that they can see what they have with the former first round pick. On top of that, the kid has hit pretty well, so they don’t need Young to fill in for Ellsbury now unless a tough lefty is on the hill. It’s hard for Young to hit his way out of what could be a slump when he’s not playing as much, and it’s hard for him to get playing time while he is in a slump. That’s the vicious cycle that bench guys often find themselves in, and Young is no exception right now.

If you’ll humor me here for a second, I’m going to go on a tangent. I can’t help but think of former Yankee OF Vernon Wells in this scenario. When the Yankees brought Wells in on the cheap prior to the 2013 season to be the right-handed pop off the bench, he, like Young, was a guy who was thought to be on his way out of baseball. Somehow, he put together a monster first 38 games in pinstripes, hitting .301/.357/.538 with 10 home runs and 23 RBI. After May 15, he didn’t homer again until August 13. Over his last 92 games, he hit .199/.243/.253 with just one dinger. The fact that he got in that many games should tell you a lot about the state of the roster that season. Sheesh. Also, Joe Girardi‘s “respect the veterans” mantra that still oozes out of his pores when he makes the lineup every day (looking at you, Stephen Drew), was clearly in full effect. Anyway, I’m hoping that Young’s season doesn’t continue down the Wells path, or that at least he isn’t forced to play 90+ games while being this bad, but we’ll have to see.

Here’s the thing about Young: his current slash line (.238/.292/.476 for those of you who forgot) is probably exactly what we would have signed up for from him at the beginning of the year. Considering his history, and the fact that he was signed to provide some defensive help and pop off the bench, that .476 slugging percentage is pretty perfect. The problem with him is that too many people put way too much stock into the last month of his 2014 season and the first month of the 2015 season, and they got their hopes up for a revival. His ridiculous first two weeks were never realistic or projectable, and he’s coming back down to Earth as the real player we signed. Frankly, I’m OK with this Chris Young if he can maintain this stat line for the rest of the year. If he continues to dip, we’ll talk more extreme solutions, but for now, he’s just Chris young being Chris Young.

What do you think, Pinstripers? Are you happy with Young as is? Should the Yankees be looking elsewhere? Are you mad at me for reminding you of the Vernon Wells era? Tell me in the comments below!