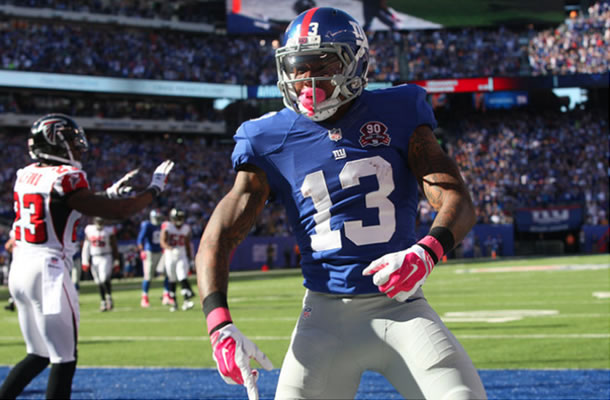 Don’t look now, NFL, but the Giants might be legitimate contenders. Despite finding themselves down 20-10 after a scintillating 74-yard catch and run by Falcons’ RB Antone Smith with just 5:37 to go in the third, the Giants pulled out a pretty satisfying 30-20 victory over the Falcons on Sunday. Eli Manning and the Giants’ offense brought back memories of their comeback-laden 2011 Super Bowl run, and the surging pass rush sealed the victory with a ton of late pressure. It was a solid team win. Let’s get to the key elements.

Number one: If you didn’t laugh at that headline, or take a nostalgic trip down memory lane involving Keira Knightley and Parminder Nagra running around in soccer shorts (or the dapper Jonathan Rhys Myers, if you’re into the fellows instead), well then I don’t want you to read on, because we’re not friends. Those of you with a taste for fine film entertainment can keep reading.

Anyway, how about Odell Beckham, Jr? Holy crap was that guy worth the 12th overall pick, and the wait we had to endure to finally see him debut, or what? He only had 4 catches for 44 yards in his NFL debut, but he caught the go ahead touchdown from Eli, and he showed a combination of speed and hands that has Giants fans salivating at the possibilities he will open up once he has his NFL feet under him. Beckham’s speed gave the Robert Alford and the Falcons’ secondary fits all game long, and I can’t wait to see how the relationship between he and Manning evolves not just over the next eleven games, but over the next several years as well. Also, his nickname is “Raptor.” What’s better than that? I think we have a winner in the LSU product. Kudos to you, sir.

The rest of the offense performed admirably as well. Eli had a bit of a quiet day, completing 19 of his 30 passes for 200 yards (he had 300 on the dot last week… weirdo) and 2 more TDs (his other one was to Rueben Randle). Most importantly, however, the veteran out of Ole Miss didn’t throw an interception again. This marks the second straight week of pick-free football for last year’s INT leader, and even the pick he threw against Washington in Week 3 wasn’t his fault… or a real interception, which is another story. Add in the icy blood during the late game comeback, and you have an awesome job by Eli in this game.

Andre Williams, another rookie, stepped up after Rashad Jennings left with a sprained MCL, putting up 20 bruising runs for 65 yards and his second career TD. Williams is really enticing to watch. Sure, his 3.3 yards per carry aren’t that impressive, but the way he looks for contact and lowers his shoulder to bust through defenders is just plain bad ass. He ran over a couple of Falcons defenders in this one, and I’m intrigued to see how he’ll handle an increased workload if Jennings misses significant time. In case you’re all wondering, Jennings channeled his inner Wolverine and said of the injury: “History has shown I always heal up quicker than expected. I don’t see why it would change now.”

Here’s hoping he comes back soon, as he has been very effective for this team so far. Also, Kudos to the offensive line, as they continued their run of great games.

Don’t get me wrong here. I have a soft spot in my hear for Matt Ryan of the Falcons. He was awesome at Boston College, and he’s been great in the NFL, but it was nice to see the Giants defense harass him in the second half. We’ll ignore the first half, because the Giants were having trouble stopping anyone then, But Jason Pierre-Paul wreaked havoc in the second half, and the defense basically shut down a fairly potent Falcons offense over the last 20 minutes of the game.

Matty Ice looked like he might have some more late game heroism in his back pocket for this one, but a 4th down sack by Johnathan Hankins, who has been tremendous this year, ended any thoughts of that. Once again, the Giants defense showed that it is going to be paced, one way or the other, by this defensive line. They have all the talent in the world, it’s just a matter of getting these guys all going earlier in games.

Other notables from the defense: Jacquian McClain had 9 tackles and 4 assisted tackles, which both led the team. This team is pretty weak at Linebacker, so it was good to see someone step up. Quintin Demps picked off a pass for the second straight week. He had an awful first couple of weeks, so I’m glad he has remembered how to play football.

The Giants have, by far, their toughest challenge of the season coming up in Week 6. They take their three game winning streak on the road to Philly, where they will face the first place 4-1 Eagles. Other than LeSean McCoy, who is single-handedly trying to ruin my fantasy football team, the Eagles have looked pretty awesome so far this season. Their offense has stepped up when the defense has struggled and, conversley, the D has been solid when Nick Foles has struggled to move the ball. This entire division, save for those racist Redskins, is playing very well right now, and it will be interesting to see how the Giants, Eagles and Cowboys will match up against each other as the season continues. Philly is a tough place to play, but here’s hoping the G-Men have some more magic up their sleeves for this one. We’ll find out on Sunday night.