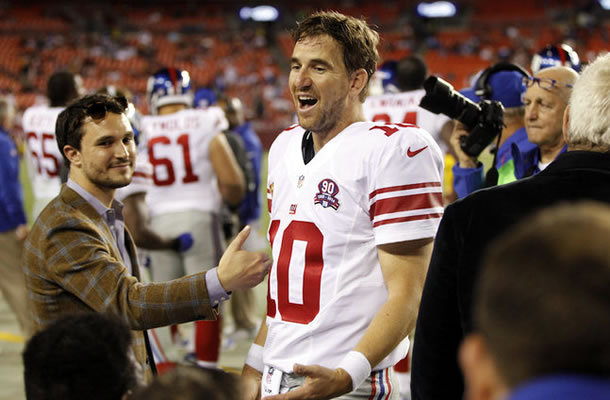 While I watched a great portion of this game, I must confess I did miss a lot of it because of the Derek Jeter festivities (can you blame me?). I saw enough to know that the Giants have made a 180 degree turnaround from their 0-2 start. It’s not just because they’ve won two after losing two. These Giants are playing like a completely different team, and I like it. I know I’m not the only one. If Wednesday’s South Park wasn’t enough to make those racist Redskins cry, Thursday night’s 45-14 thrashing should just about do it.

Donnell and the Giants’ Tight Ends have been on parade so far this season.

This offseason, everyone was hoping that, some way, some how, Eric Ebron (the best Tight End in college football) would fall far enough for the Giants to take him with the 12th overall pick in the draft. Instead, the stupid Lions took the 21-year old out of UNC at #10, and the Giants ended up with Odell Beckham Jr., who hasn’t played a down so far this year. Anyway, the Giants Tight End situation was a complete unknown heading into training camp. I mean, we knew that their Tight Ends were set to be Larry Donnell, Daniel Fells and, to a lesser extent, Adrien Robinson, we just didn’t know who the hell any of those guys were.

Donnell introduced himself to the whole league in the first half of this game, catching three TDs from Eli Manning before the Two-Minute Warning. Overall, Donnell was targeted 8 times, catching 7 passes for 54 yards and those three scores. Fells, meanwhile, added 2 catches for 8 yards and caught Eli’s fourth TD. On the season, Donnell and Fells have combined to haul in 31 catches for 274 yards and 7 big TDs (in case you’re wondering, Ebron has 6 catches for 72 yards and 1 TD on the year). I don’t think I’m too worried about the Tight End position anymore. How about you guys?

Eli had no trouble finding the rest of his receivers either, as he hit Victor Cruz 6 times for 108 yards, Rueben Randle 8 times for 89 yards and spread it out to three other guys too on his way to a 300 yard evening. Eli also had his most accurate performance of the season so far, hitting on 28 of 39 passes, which was good enough for 71.8%. He did throw an interception, but it was, in my opinion, a bad call. Randle caught the ball in the end zone, turned, got both feet down and was hit. The ball popped loose and was intercepted. Apparently, Randle didn’t make a “football move,” which I don’t think can be defined in a tangible way. He should have had 5 TDs and no picks, but I guess we’ll settle for 4 and 1. Eli even ran for a TD, which is just ridiculous.

The actual Running Backs, although not needed all that much, performed really well. Overall, the G-men ran the ball 38 times for 154 yards. Rookie Andre Williams led the teams in both carries (15) and yards (66), and scored his first NFL Touchdown. Rashad Jennings, meanwhile, carried 13 times for 55 yards. It’s not quite the 176 yards he put up last week, but it was just fine. Even Peyton Hillis carried 8 times for 31 yards! Kudos all around, running game.

There’s nothing sadder than a sad Kirk Cousins.

I’m not sure if the Giants caused 6 turnovers in this game, or just kind of accepted the from the Redskins. Kirk Cousins threw four interceptions, each worse than the last, including three in the third quarter alone. Prince Amukamara, Quintin Demps, Trumaine McBride and Antrel Rolle all took passes the other way, and the Giants even forced two fumbles on the night too. It was an all-around dominant performance by Perry’s Boys; the second week in a row they’ve looked quite good. I still hope he gets fired though. I just don’t know how else to be.

Seriously though, the Redskins offense got nothing done. Cousins went 19-33 for 257 yards, but the 4 INTs and only 1 TD really stick out as the main reason the Redskins were unable to put more points on the board. The Giants D-line, meanwhile, only sacked Cousins once, but they did a pretty solid job of pressuring the youngster out of Michigan State, which contributed to all the picks for the secondary. Maybe Redskins fans won’t be so quick to send Robert Griffin III out the door now that they’ve seen the darker side of Cousins, eh? Washington Running Back Alfred Morris was OK, carrying 12 times for 63 yards and a TD, but he became a bit of a non-factor after the Giants got off to their big lead and the Redskins had to rely more on the pass.

This man deserves to get his hat crapped in.

I’ve always enjoyed it when the Giants knock around the Redskins, but this one feels a little better. I know that the Redskins’ team name is one of the current hot button topics when it comes to the NFL, and everyone and their mother has an opinion on it, but I haven’t really shared mine. It’s ridiculous that this team name is still allowed to stand. You could make an argument that the Kansas City Chiefs and Atlanta Braves should probably change their names too (or at least stop with the chop chants and singing), but there’s no doubt that the Redskins, and the Cleveland Indians for that matter, need to find a new identity.

I could get into all of the reasons, and point out all of the evidence, but it has all been said and done by others more talented and connected that me. Let’s just get serious. Well all know that Redskins owner Dan Snyder is a piece of human garbage, and should be forced to sell the team to someone who will change the name. Seriously, look what the NBA did this past offseason with the Clippers. Anyone who claims that the term Redskin is a term of endearment and should be a point of pride, is ignorant and stupid. It’s a slur. Just because that one old Native American guy on Quantum Leap told Sam (who had leapt into the body of the old guy’s grandson) that he loved the Redskins, it doesn’t mean anyone in the Native American community is happy that the name is still in existence today. That episode was written in the less politically correct 1980s, and probably by some white guy who thought it was funny.

We wouldn’t name a team after any other racial slur, or even something that could be remotely mistaken for a racial slur. The name needs to go. Roger Goodell and the NFL really need a PR win this calendar year. Maybe the big idiot should just go ahead and make this one happen. Until someone gets off their ass and does something to make the name change, I really and truly hope Washington loses the rest of its games. By the looks of their talent on the field, that might not be all-together unachievable.